The Burmilla combines the characteristics of Chinchilla Persians and Burma. She is playful but balanced. The gentle beauty is suitable for keeping at home, but a second cat is recommended in this case. The sociable Burmilla feels particularly at home in company. She talks a lot and likes to talk, so the future owner should not be bothered by frequent meows. Since, in contrast to Burma, it has an undercoat, walking outside is not a problem. Living together with other animals is usually unproblematic. Even smaller children usually do not disturb their velvet paws. The Burmilla is suitable for first-time cat owners.

The Burmilla is a cat breed from Great Britain and was created in 1981 through the mating of Chinchilla-Persians and Burma. Their emergence was initially by chance, as a chinchilla Persian and a Burma should each be paired with a partner of their own breed. However, due to a mistake by the cleaning staff, both cats met each other. The result was four kittens who combined the characteristics and appearance of both breeds. After that, intensive breeding led to the establishment of the Burmilla breed. Kittens that result from a simple mating of Chinchilla-Persians and Burma are therefore no longer considered Burmillas today.

In 1984 the breed’s first standards were established. The FIFé (Fédération Internationale Féline) then recognized the beautiful velvet paw as an independent breed in 1996.

Characteristic for the appearance of the Burmilla is the deep green eyes, which they have inherited from the chinchilla Persian as well as the coat color. The color of the coat changes over the course of a cat’s life. At first glance, the Burmilla looks delicate, but its body resembles that of sturdy Burma. Overall, their appearance is round, the ears are medium-sized. Since it is descended from the Persian cat, animals of the breed can inherit polycystic kidney disease. However, this can be ruled out through consistent selection breeding. Overall, they are considered to be less susceptible to disease.

The Burmilla is a calm cat who likes to play, but for whom cuddling and cuddling is at least as important. In her essence, she unites the typical characteristics of her kinship. While she is sociable and talkative like a Burmese, she seems to owe her gentle disposition to the Persian cat. 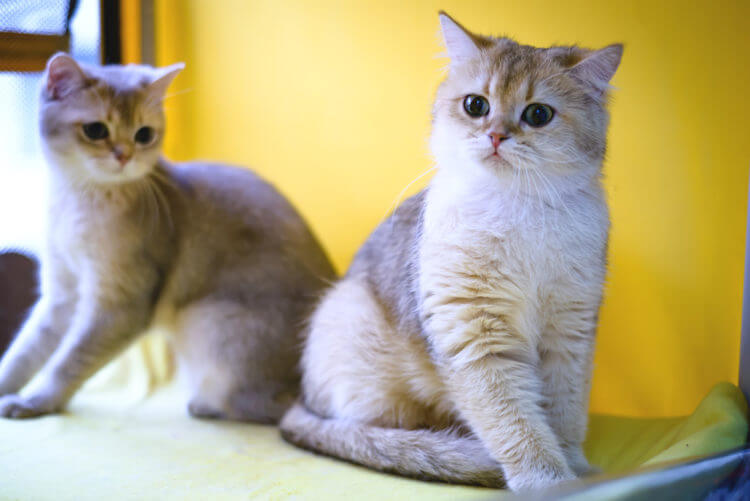 The human-related velvet paw is less suitable for individual keeping in the apartment. Buying a second cat is recommended, especially for working people. The Burmilla, which is also considered playful in adulthood, will by no means get bored or even lonely. The Burmilla can be occupied with intelligent toys, a scratching post to run around, and, for example, trick training. In contrast to the fur of the Persian cat, the silky and short fur of the Burmilla is easy to care for.

The affectionate and even-tempered cats love having children play with them. The Burmilla can also accept other pets in its home. With its uncomplicated nature, it is ideal for first-time cat owners. When purchasing one, however, one should consider their strong need for communication. However, those who do not mind their meowing will have a lot of fun with the gentle beauty.