The Maine Coon impresses with its size. Since it is accordingly heavy, you should pay attention to stability when choosing a scratching post. If it is intended to be kept in an apartment, there should be plenty of space for the big velvet paw. For working people, it is usually advisable to buy a second cat. The Maine Coon’s coat requires regular grooming. In general, she is considered a playful and intelligent cat, for whom children are usually no problem. The compatibility with dogs varies from person to person. By choosing a reputable breeder, hereditary diseases can usually be successfully ruled out. The Maine Coon is suitable for first-time cat owners.

The Maine Coon, like the Ragdoll or the Norwegian Forest Cat, is one of the large cat breeds. It is often referred to as the largest and heaviest breed. In the USA this has earned her the nickname “gentle giant”. The US is often given as the origin of the breed, but its actual origin is largely unknown. However, the theory seems likely that the longhair gene in cats originated in Europe and came to America through ship cats. Perhaps because of its unclear origin, there are several legends about the popular breed.

For example, there is a myth that the Maine Coon emerged from the mating of a cat with a raccoon. This biologically impossible claim probably came about because the velvet paw with its bushy tail is reminiscent of a raccoon (English raccoon or coon).

Another story tells of a certain Captain Coon who was touring America. When the captain of the merchant fleet disembarked, his long-haired catfish allegedly followed him. If these mated with native cats, the resulting litter should often have been commented on with the words “Another Coon cat!”.

A little more likely (and realistic) is the legend that the Maine Coon is said to be related to the Norwegian Forest Cat. In this theory, too, ship cats are said to have mated with native cats. Since the breeds are actually visually similar, the theory is perhaps less absurd than the relationship with the raccoon.

However, none of these stories are historically proven. What is certain is that the Maine Coon was seen at agricultural fairs in America as early as the 1850s and enjoyed great popularity there. At that time the Maine Coon was still called Maine cat and was named “Maine State Champion Cat”.

Recognition of the Breed and Visual Characteristics 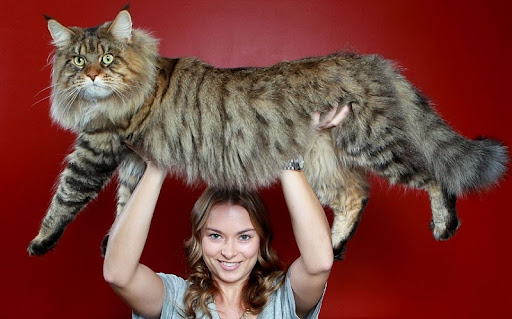 In the first studbook of the CFA (Cat Fanciers Association), which was founded in 1906, 28 Maine cats were registered. In the following years, the Maine cat was temporarily forgotten, presumably because of the great popularity of the Persian cat.

It was not until the 1950s that breeders began to campaign for the recognition of the breed again and presented them at various cat shows. Well-known Maine Coon breeders of the 1960s and 1970s included Sonya Stanislow (Tati-Tan), Mary M. Condit (“Heidi-Ho”), and Ethelyn Whittemore (“Whittemore”). Even today, animals from these breeders are often represented in the family tree of a Maine Coon. However, since the breed can suffer from various hereditary diseases, many breeders are now trying to expand their gene pool.

The breed was finally recognized by the CFA in 1976, the FIFé (Fédération Internationale Féline d’Europe) did not recognize the Maine Coon until 1983.

Visually, the Maine Coon is primarily characterized by its imposing size. Also noticeable are the tufts of fur on the ears, which are expressly desired but not a “must” for the kitty. The Maine Coon has a largely water-repellent coat that protects it from moisture and cold. In the United States, velvet paws have long been typical farm cats, so they tend to be excellent hunters. 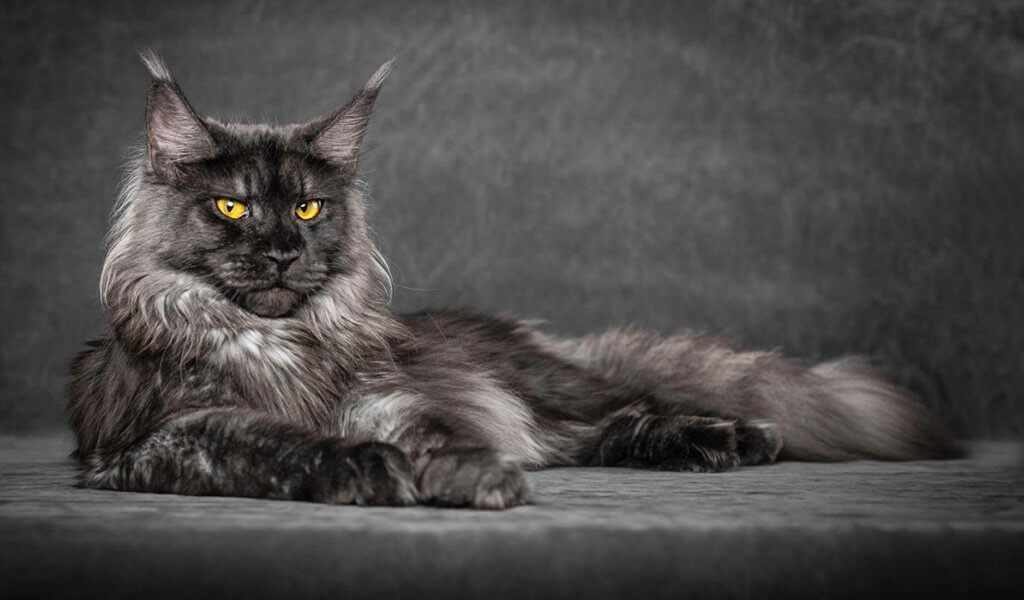 Like the Siamese, the Maine Coon is often referred to as the “dog-cat”, which primarily refers to its intelligence and play instinct. She is able to learn to retrieve, often remains playful into old age and usually likes to accompany her owner through the house or apartment. The Maine Coon is not known as a lap cat but is known for its sociability. The big velvet paw usually behaves socially towards other conspecifics. She can also tolerate other animals in the household, but this does not have to apply to all representatives of the breed.

The Maine Coon is also sociable with its people. She is considered a talkative puss. Lovers of the breed often describe their voices as unusually quiet for their imposing size.

Today the Maine Coon is one of the most popular and well-known cat breeds. Above all, she is valued for her gentle but playful nature and for her intelligence. Maine Coon keepers often describe their tendency to ingest their food with their paws and love the water. These could also be reasons for the comparison with the raccoon. 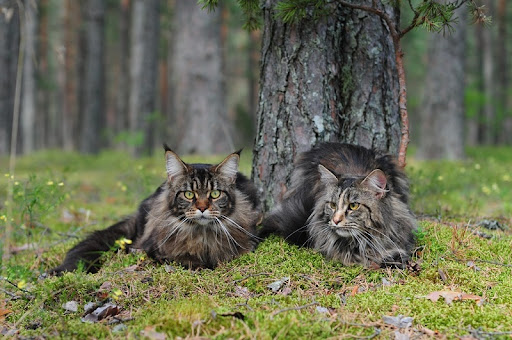 Like all semi-long-haired and long-haired cats, the Maine Coon’s coat requires regular grooming. Daily brushing is particularly recommended during the change of coat.

The Maine Coon doesn’t mind rain in itself. Since their fur is considered water-repellent, they should not return too heavily soiled when they go outside. Due to its size, an apartment must offer the Maine Coon a lot of space. If the kitty is only to be kept in the apartment, she needs a large and stable scratching post as well as sufficient play and employment opportunities. Many owners especially praise the kitty’s intelligence, which is why a corresponding cat toy is a must. Working people should also think about buying a second cat.

The Maine Coon, which is actually considered robust, can suffer from various hereditary diseases. These include, for example, hypertrophic cardiomyopathy (a heart disease) and hip dysplasia (large and correspondingly heavy breeds such as the Maine Coon are known for HD). She can also suffer from elbow dysplasia or polycystic kidney disease (a genetic test is already available for Persians and related breeds to rule them out).

When purchasing a Maine Coon, care should therefore be taken that no animal in the breed has the diseases mentioned.