It looks like a normal herb, but it is sure to drive cats crazy: catnip. Why is the plant so attractive to our kitties? The reasons for this are still unclear – although a lot of research has already been done on this.

Experts speak of catnip as a year-round mint family. Of course, that alone does not make the plant so attractive for cats. According to veterinarian Dr. Stephanie Austin is especially attracted to the nepetalactone.

The fragrance is part of the leaves and the stem of catnip, she explains to “The Dodo”. With the help of nepetalactone, the plant repels insects – the effect on cats is completely the opposite.

Sexually mature cats are attracted to nepetalactone, which is why dried catnip is sometimes found in cat toys. Some cats eat fresh catnip, for example in the garden. They rub their head or body against it and sometimes the kitties even roll around in the plant – which makes it useful. Because when the cats wallow in it, Klaus fruits often stick to the fur and at some point fall back to the ground. This allows the plant to spread.

In the meantime, some researchers have already investigated why catnip is so attractive to our velvet paws. However, the exact reasons are still unknown.

One thesis said that catnip could act as an aphrodisiac on kitties – but neutered cats also react to its scent, which rules out this effect. 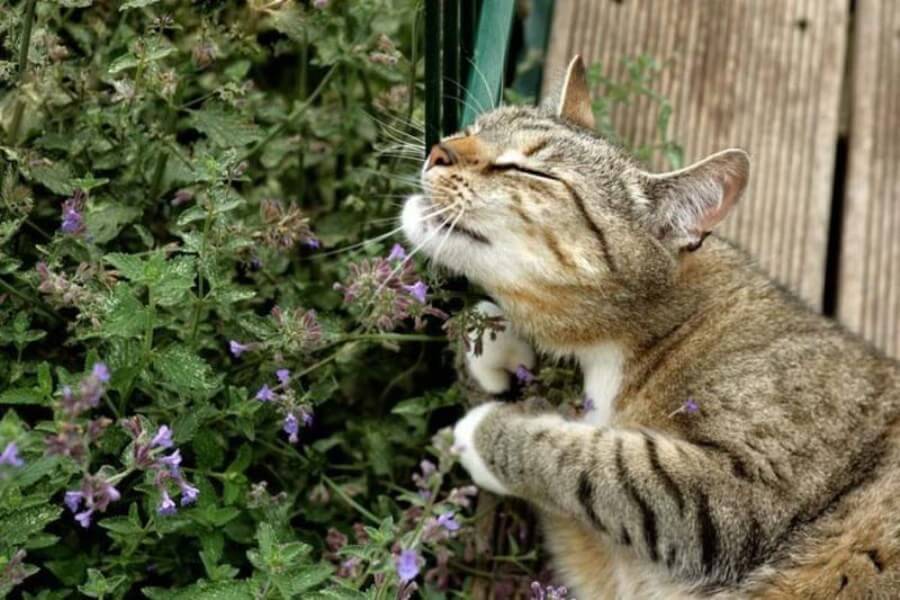 Another explanation could be that the cats’ reaction to the plant is genetic. According to this, about 70 percent of all cats are attracted to catnip. Young animals and very old cats in particular show very little attraction. Incidentally, in addition to domestic cats, big cats such as lions, jaguars, and leopards also like the smell of the plant.

Recently, biochemist Sarah E. O‘Connor and her team made an interesting discovery in a study: They found a previously unknown enzyme. It is largely responsible for the formation of the cis-trans nepetalactone, which is so popular in cats. When this molecule reaches the olfactory receptors in the cat’s nose, it stimulates the cat.

How exactly the molecule creates this effect and why cats react to it is still unclear. This is reported by the science magazine “Spectrum”.

By the way: With dried catnip, you can make great toys for your kitty yourself.