Gray parrots were surprised with their talent for speaking. Some can mimic hundreds of words.

Gray parrots belong to the parrot family. Compared to many other parrots, they are very simply colored: their plumage is light to dark gray and shimmers in many nuances. The feathers on the head and neck have a light edge. Beak and claws are black, feet are grey.

Around the eye, the skin is white and devoid of feathers. Their tail feathers are all the more striking: they glow in bright red. As a typical feature of all parrots, they have a large, very powerful beak. Gray parrots are 33 to 40 centimeters long and weigh about 450 grams, making them the largest African parrots. When they spread their wings, they measure up to 70 centimeters.

Where does the gray parrot live?

Gray parrots come from Africa. There they live from West and Central Africa to northwestern Tanzania – even at altitudes of 1200 meters. Gray parrots prefer to live in the forest. They inhabit mangrove forests, rainforests, estuaries, and the steppes of their African homeland. They are not found in the mountains.

Which gray parrot species are there?

How old do gray parrots get? 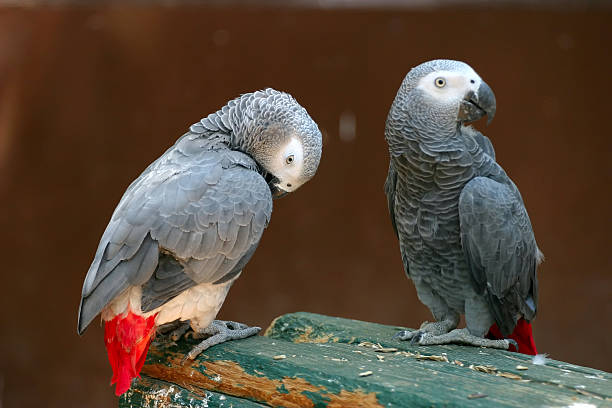 Gray parrots, like all parrots, grow very old: they can live 50 to 80 years.

How do gray parrots live?

Gray parrots are very sociable birds. Most of the time, they stay with one partner for life. Both animals feed each other and groom each other’s feathers – especially in places that they cannot reach with their beaks. However, the pairs do not live alone, but together in larger swarms of 100 to 200 animals.

African Grays fly fast and in a straight line. When they go in search of food together, they also fly very high above the forests. Whole swarms often invade fields and look for food there. Gray parrots are very good climbers. They cleverly hold on with their beaks and twirl around in the branches of the jungle trees.

When it gets dark, the whole flock flies to its roost high in the trees. On the ground, they can only walk relatively clumsily. Even in captivity, gray parrots absolutely need company. If you don’t give them enough attention, they quickly become lonely and ill.

Friends and foes of the gray parrot

In nature, gray parrots have few enemies. They are most threatened by humans: Gray parrots have been caught, brought to Europe, and sold there since the 16th century. But many birds did not survive the transport or died after short captivity.

How does the gray parrot reproduce?

When the breeding season comes, the gray parrot pairs withdraw into tree cavities about 50 centimeters deep and hatch their eggs there. While the female is incubating, the male stands guard in front of the nesting hole and provides the female with food.

Usually three to four young hatch after 30 days, which are cared for by the male and female together. They have a long coat of down, which is fluffy, soft feathers that are only replaced by the correct plumage after ten weeks. Beak and feet are light at first and only later turn black.

After about twelve weeks, the young leave the nest for the first time but are fed by the male for another four months. They can’t fly yet, they just do gymnastics on the branches around the nesting hole. Between the fifth and eighth months of life, the initially dark plumage becomes lighter and lighter, and little by little the young gray parrots learn to fly better and better. They then live independently in a swarm with the other gray parrots.

How do gray parrots communicate?

Everyone knows the typical parrot screams: Loud and screeching, they penetrate every wall. Especially lonely animals can develop into real screamers. Gray parrots may also growl or hiss when frightened.

Gray parrots have a special talent: They are very good at imitating other sounds and can even repeat words or whole sentences. However, not every gray parrot learns to speak equally well: gifted parrots can repeat a few hundred words, less gifted ones only a few words. Some just imitate sounds, like a phone ringing. This can be really annoying in the long run!

What Do Gray Parrots Eat?

Wild gray parrots eat nuts, berries, and other fruits, sometimes insects. If Gray Parrots are kept as pets, they are fed a mixture of seeds and nuts. They also like fresh fruit and vegetables. They particularly like to snack on pineapples, apples, cherries, melons, grapes, or oranges. Aubergines, broccoli, peas, kohlrabi, corn, carrots, tomatoes, or zucchini are suitable vegetables. Caution: avocados are poisonous to gray parrots! 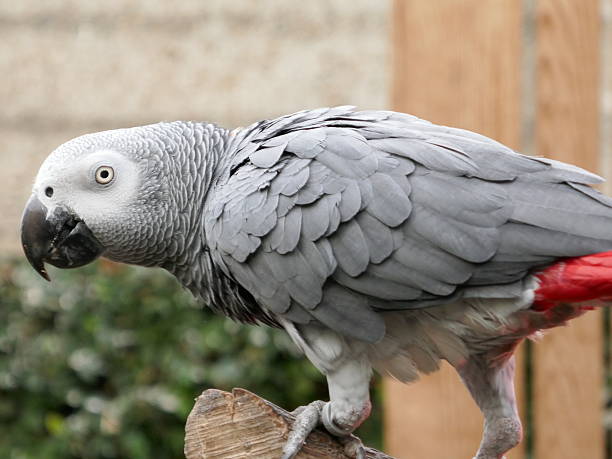 When keeping a gray parrot, an adult should always take responsibility: they are quite demanding animals that need a lot of attention. You also need to know a lot about parrot behavior and beware of the sharp beak. Gray parrots need a lot of exercises. You can only keep them in a cage if they can fly around freely in the room every day.

The cage must be at least large enough for the animal to comfortably spread its wings. The base area should be at least 80 by 50 centimeters, a larger cage is of course better. The bars should be horizontal so that the birds can hold onto them when climbing.

The bottom shell must be made of solid plastic and constructed in such a way that the edges cannot be reached by the parrot’s sharp beak. This is because gray parrots break everything up with their beak, sometimes eating small parts and getting sick from them. In addition to two food bowls and a water bowl, two to three perches belong in the cage.

Gray parrots feel more comfortable in a large aviary that is about 200 by 100 centimeters in size and 180 centimeters high. Here you can keep two parrots and they still have enough space to move around. There is also enough space for a climbing tree, which will quickly become a gray parrot’s favorite playground. The cage or aviary should be in a bright corner, but not in direct sunlight. They feel most comfortable at 18 to 20 degrees Celsius. Very important: the place must be protected from draughts.