These parrots from Southeast Asia stand out with their brightly colored red-purple and green plumage.

Halmahera Eclectus Parrots are among the most beautiful birds in the tropics: as with all Eclectus Parrots, females and males differ so greatly that they were even classified as different species in the past. The males are green with a few red spots on the sides of the body. They are almost yellowish on the back of the head, neck, and back. The tail feathers have a whitish-yellow border. The underside of the tail is blackish. The beak is orange with a yellow tip.

The females have purple to redbreast. The tail is red on the top and bottom and has a hem up to four centimeters wide. Halmahera Eclectus parrots are about 38 centimeters tall and weigh about 450 grams. The wingspan is up to 70 centimeters.

Where do Halmahera parrots live?

Eclectus parrots are found in New Guinea and the small islands around New Guinea and Indonesia. Some subspecies also live in northeastern Australia. The Halmahera Eclectus Parrots are native to the Indonesian central and northern Moluccas, including the island of Halmahera for which they are named. Halmahera Eclectus parrots can be found in forests, savannas with scattered clumps of trees, and also in mangrove forests. They can be found up to 1900 meters above sea level.

What species of Halmahera parrot are there? 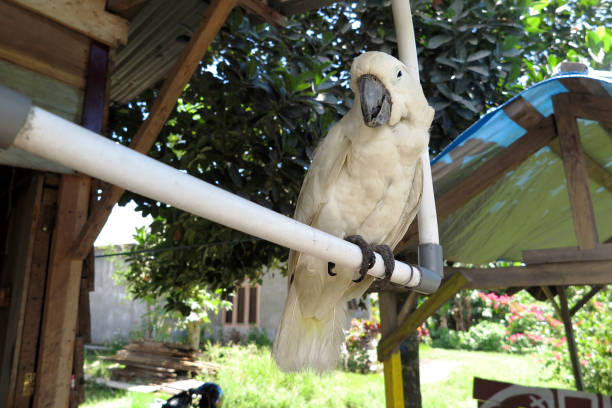 Ten different species of Eclectus Parrot are known today. In addition to the Halmahera Eclectus, these include, for example, the New Guinea Eclectus, the Salomon Eclectus, the Queensland Eclectus, and the Westermans Eclectus.

How old do Halmahera parrots get?

Like other parrots, Halmahera Eclectuses can live for several decades.

How do Halmahera parrots live?

Halmahera Eclectus Parrots are social animals. They live as a couple in small family groups. However, you usually only see pairs when they fly around in search of food. They like to come to plantations and even gardens to look for food.

Individual males are conspicuous, sitting high on branches and calling loudly. The females, on the other hand, usually sit very quietly near the trunk on a tree and, despite their bright colors, can hardly be spotted in the foliage of the tropical forest. Because in the shade of the forest, their red-blue-violet plumage is perfect camouflage.

Unlike other parrot species, the partners do not sit so close together on the branches. Males and females usually stay on different branches or even on different trees. However, many Halmahera Eclectus Parrots often gather together to sleep on so-called sleeping trees. Sometimes they sit in groups of up to 80 birds on a tree. Finally, in the early morning hours, pairs or small groups set out for food in forests or palm groves. Each female usually flies behind its male.

Halmahera Eclectus Parrots are very shy and alert. If disturbed, they fly up screaming loudly. In the afternoon between 4 and 6 p.m., the birds return to their roosting trees and spend the night there. Each pair that arrives is greeted loudly by the animals already present.

Friends and foes of the Halmahera parrot

If the Halmahera Eclectus parrots are not alert, they can fall prey to numerous enemies such as small predators and various reptiles such as snakes.

How do Halmahera parrots reproduce?

Halmahera Eclectus parrots become sexually mature at around three years of age. In the wild, they breed between August and April. Sometimes they breed several times in a row. In regions with a favorable climate, they even breed all year round.

They build their nests in the cavities of dead tree trunks at a height of 14 to 25 meters. The entrance hole has a diameter of 25 to 30 centimeters. The brood cavity is between 30 centimeters and six meters deep. Each female lays two eggs, which are incubated by the female for about 26 to 29 days. The male will come by regularly during this time to feed the female. After hatching, the small Eclectus parrots are cared for by their parents for about 85 days until they are finally independent.

How Do Halmahera Parrots Communicate?

Like all parrots, Halmahera Eclectuses can cry very loudly: Their screeching calls sound like “Skratch-Kraak”. This call is usually repeated four times. When they eat, they make a “tech-witch-wi” call. The males also have calls that sound like “chee-one”. 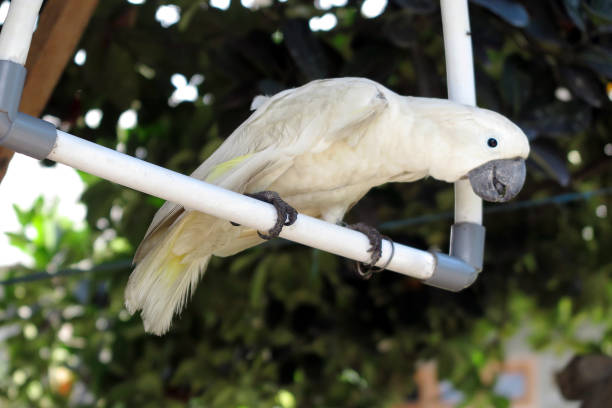 What do Do Halmahera Parrots eat?

In captivity, it is best to feed them plenty of fresh fruit and vegetables. Half-ripe corn and a mixture of buckwheat, oats, nuts, and other seeds are also suitable as feed. The birds need a lot of vitamin A. When they breed, they also get germinated seeds.

Like the other Eclectuses, Halmahera Eclectuses are often kept as ornamental birds because they are so colorful. However, they are very demanding fosterlings: they need a lot of attention and company every day.

Keeping these birds is therefore only for adults who have a lot of time and can devote themselves entirely to their animals. If you have a breeding pair that harmonizes with each other, then Halmahera eclectic will also breed in captivity. Although Halmahera Eclectus parrots are a little quieter than other parrot species, they can scream very loudly in the evening.