Everyone knows horse riding, but other horse-related sports are usually little known. This also includes vaulting – a shame, because the sport offers a unique mix of acrobatics, gymnastics and closeness to animals. We want to change that today. Here you can find out what is meant by vaulting and what it takes to do it!

Contents show
1 What is Vaulting?
2 This is How a Vaulting Lesson Works
3 Equipment for Vaulting
4 Equipment for Horses
5 Equipment for People
6 Vaulting for Children or: When Should You Start?
7 On a Healthy Path – Remedial Vaulting 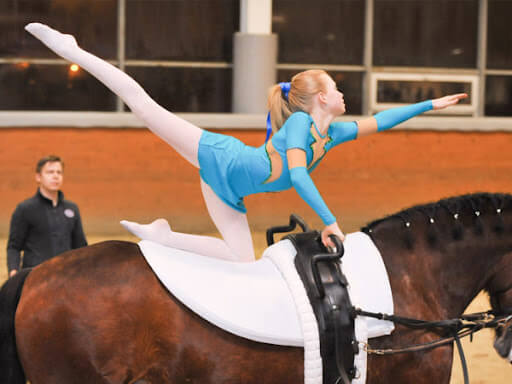 Anyone who vaults does gymnastics exercises on horseback. The animal is usually led in a circle on the lunge, while the vaulters perform exercises on its back alone or in a group.

For sport, you, first of all, need a good knowledge of your partner – the horse. This is the only way to empathize with the animal, understand it, and hold on to it. In addition, strength and endurance are essential.

Anyone who thinks that vaulting is extremely dangerous is not entirely wrong. Like any sport that takes place on and with the horse, there is also a risk of falling, and bruises and bruises cannot always be avoided. Nevertheless, the lunge and the equipment offer a lot of safety.

This is How a Vaulting Lesson Works 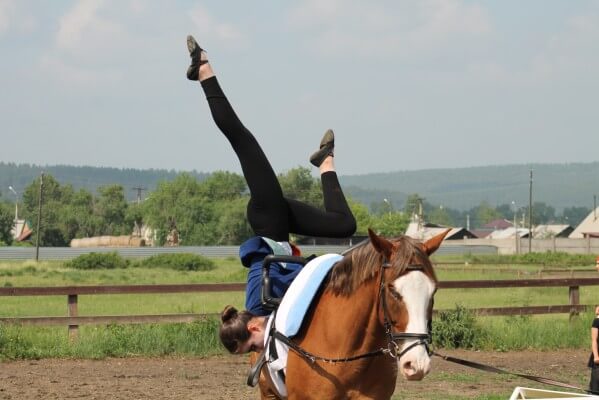 Before the actual sport can start, the horse must be properly cleaned and cared for. Then it is warmed up on the halter at a walking pace. In addition, the vaulters – those who do gymnastics on the horse – have to warm up. Jogging and stretching exercises are usually part of the program here.

When vaulting, the horse is then led on the lunge, as I said. The distance between the animal and the leader must be at least 18 m – sometimes more, depending on the tournament regulations. Depending on the choreography, the horse walks, trots, or gallops.

The vaulting man then usually pulls himself onto the horse’s back using the two hand straps on the vaulting harness. Here, either alone or with up to three partners at the same time, he performs various exercises that are known from gymnastics. This includes, for example, the handstand and the scales, but figures from cheerleading are also possible.

In order to vault successfully, you need a few pieces of equipment for horse and rider, but also for the training itself. The most important thing is the wooden horse, also called the buck. It offers space and safety for dry runs. This way, the vaulters can get used to the motion sequences in the resting state. 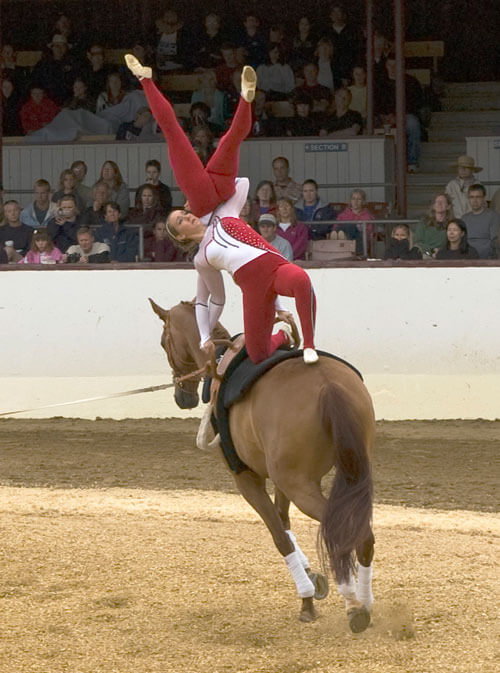 The buck as well as the right horse are equipped with a vaulting belt. This has two handles, two-foot straps and, depending on your taste, can also be provided with a middle loop. In the case of horses, a vaulting blanket (pad) and a foam pad are placed underneath to protect the back. The animal is bridled with a bridle or cavesson.

Gaiters and bandages are also essential for the horse. Spring bells, auxiliary reins, and fetlock boots are also conceivable. Of course, a lunge and a lunging whip must also be available.

The vaulters themselves wear elastic jerseys or even a special vaulting suit. These offer full flexibility and are usually also permeable to sweat. The right shoe is also part of the equipment. In the beginning, you can use simple gymnastic shoes, later there are the more expensive vaulting shoes.

The tight-fitting clothing guarantees, on the one hand, that postural errors are not concealed and can thus be corrected. On the other hand, it offers security, because you cannot get caught in the belts.

Vaulting for Children or: When Should You Start?

As in any sport, it is good to start as early as possible. That is why there are already groups of four-year-olds who swing elegantly on the horse and do gymnastics on it. However, nothing speaks against starting the sport as an adult – you should only have a love for horses and a lot of courage. However, being able to ride is not a requirement.

Vaulting is also a relatively inexpensive equestrian sport. Because there is always training in groups on a horse, there is a good sharing of costs. Sport also offers a lot of social opportunities. You have a fixed group that you can trust and have fun with.

It is also training for the whole body. Strength, endurance, and body tension are the be-all and end-all.

On a Healthy Path – Remedial Vaulting 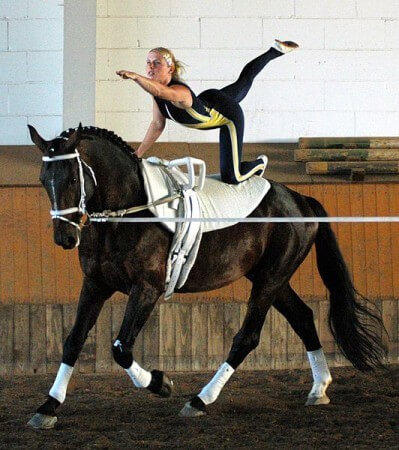 It is already known from other procedures, such as dolphin therapy. Among other things, the social-emotional maturity, as well as sensorimotor and cognitive abilities of an often mentally handicapped person, are significantly increased. It is very similar in sport with a vaulting horse. This creates close bonds between humans and animals, but also between people in the vaulting group.

The positive results have been shown by many studies and are making the sport more and more popular. In addition to curative educational vaulting, the horse can also be used for curative educational riding. Depending on the individual needs, a combination of both sports is also conceivable.

These educational measures are particularly suitable for the following groups: