As we all know, horses are naturally permanent eaters. This means that they should have constant access to feed, even when they are kept. This is not a problem in the pasture – but what about in winter or in the box? We show how a hay net is used to feed horses! 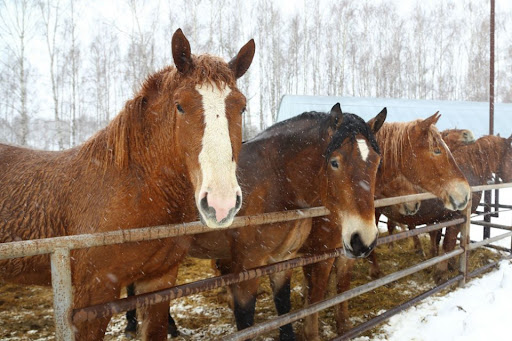 It used to be common for horses to have meals like us humans. This means that they were served a portion of hay each morning, noon, and evening. As soon as that was used up, they had to wait for the next feeding.

However, studies have shown that this method of feeding is contrary to the nature of the horse. Wild horses are busy eating about 80% of the day. On the other hand, long breaks from eating (such as occur when feeding a meal) can damage the psyche and health of the horse. Often these animals suffer from digestive disorders.

However, if you provide them with a permanently filled trough with hay, many horses will overeat. They then often suffer from being overweight, especially with particularly sugary feed. So what is the solution to this dilemma? Many horse owners agree to the hay net.

Feed the Hay – Definitely, But in Moderation

In theory, hay is the ideal roughage for our “domestic horses”. It gets the digestion of the animals going and corresponds to the natural food of their ancestors. But overfeeding with hay can have serious consequences – in addition to being overweight, many animals are also more susceptible to disease.

This means that we have to control the hay consumption, but in such a way that the horses still have constant access to the roughage. Unfortunately, the open hay troughs usually invite you to gobble up, and feed is often wasted because it is trampled on.

However, if the roughage is packed in a hay net, this has a number of advantages. On the one hand, the animals have to work more for their feed – they have to thread the individual stalks through the more or less tight meshes and so cannot loop. In general, this means that food intake takes significantly longer and the horses still consume less feed. Hay nets also have a positive side effect: the feed stays in place and is neither carried away nor scattered by the animals or the wind. 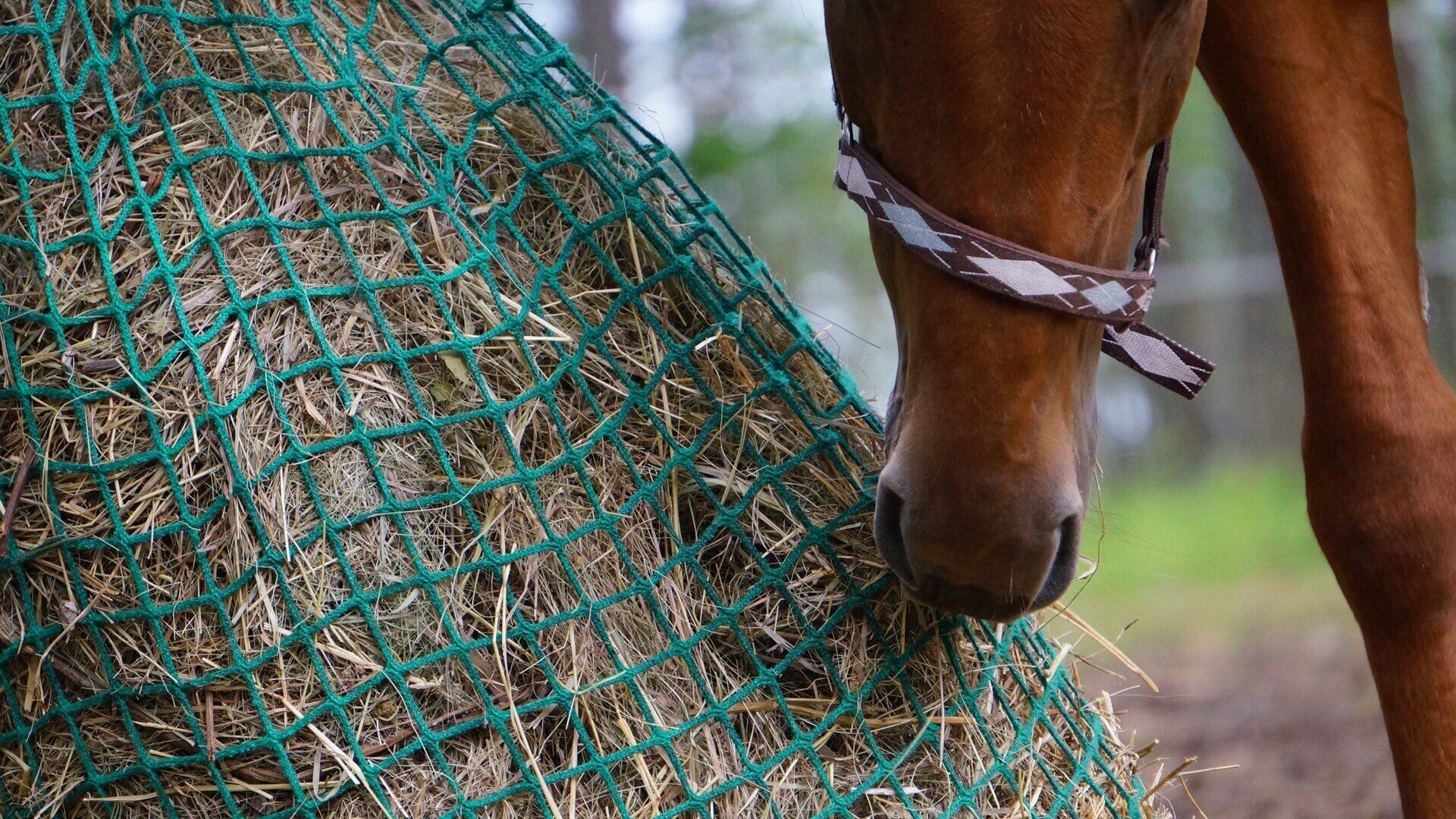 This type of feeding undoubtedly has many advantages, but the hung sack filled with roughage is not always suitable. Fortunately, the hay bag is by no means the only way to use a hay net – on the contrary, there are actually no limits to your imagination!

You can often see them in stables and in the shelter on the paddock: the hay bags or baskets. Both are filled with roughage and are attached to the ceiling with a rope. The difference between the two variants lies in the content. While the hay bag actually only consists of the net, there is a stable cylindrical wire container in the hay basket.

Basically, the hay basket is a further development of the sack. The filling is much easier thanks to the stable basic shape. In addition, the horses cannot “cheat” by pressing the net against the hay because the wire does not give way. This results in a significantly longer feeding time.

Unfortunately, both forms have one disadvantage. If they are the only source of food, the horses are in an unnatural position during the entire feeding time. Since the animals in nature mostly eat grass from the ground, their body has adapted to the bent posture of the head and neck. On the other hand, hay nets that are too high and where the horses tend to stretch can adversely affect digestion – so make sure you hang them as low as possible.

Hay Net For Round Bales …

As an alternative to hanging hay, you can also cover a whole bale of hay with a net. Here, too, the purpose is to regulate the feed intake, but filling or attaching is much easier. All you need to do is wrap the net around the bale.

You then place the prepared bale at the usual feeding place. However, always make sure that the horses do not unpack the hay again. It is best to fasten the net with strong knots or even an additional rope.

… And For the Feeding Trough

Another variant would be to simply continue to use the usual feeding trough. However, carefully cover the hay with a net. In this way, the animals maintain their natural posture, and getting used to them is not too difficult.

For this type of feeding, there are special troughs in which the net can be easily clamped. Of course, you can also tinker with something yourself – for example, a frame to which the net is firmly attached is a good solution. You then only have to put it back into the trough and fasten it after filling.

If you use a cord net, your horse can bite through it. The constant buying and repairing can quickly become annoying. That is why some clever people have come together and designed an alternative to the cord.

The so-called belt nets are made of sturdy rubber and are almost impossible to break. However, their attachment is a lot more difficult and actually, they are almost only suitable for a trough.

If you prefer to hang up a hay bag, then try a thicker cord first. This can be up to 5 mm – by default, however, it usually only varies between 2.5 and 3 mm.

Switching to hay nets often causes stress, especially with overweight horses. They have the feeling that they are not getting enough food, which is why they spend too much time at the hay racks. This leads to them sleeping and playing too little. If you notice this behavior, it is time for a combination.

It is particularly smart to make about 2/3 of the daily requirement for the horse freely accessible. If it has eaten this hay and is full, it can go to the hay under the net in a more relaxed manner. A trough, for example, in which the net is stretched deeply, is ideal. The loose hay is then placed on top. Once that has been fed away, the horses have no choice but to pull the rest of the hay out of the net.

Once you have decided on a type of hay net, there are a few more criteria to consider before you can buy it. The most important question is probably the dimension of the network. Since a horse should eat at least 1.5 kg of hay per 100 kg of body mass per day, the size of the net should be based on this. They are available as standard for fill quantities between 3 and 14 kg of hay.

The mesh size is also decisive. Close-meshed networks are usually more expensive, but they also offer some advantages. The horses clearly need length to eat because they have to work more for their feed. In addition, they are less likely to get caught in the net and the risk of injury is significantly reduced.

However, make sure that the meshes are not too small. Otherwise long and coarse stalks can be difficult to get out of. If you want to start with net feeding, a mesh size of 4 mm is probably a good compromise – if eating becomes too effortless, you can replace the net with a narrower-meshed version. 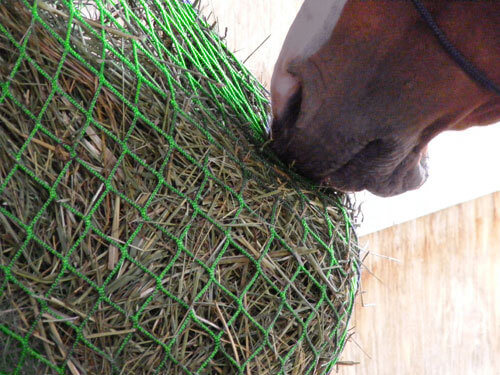 Now that we have highlighted the many advantages and variants of the hay net, we do not want to ignore the possible dangers. We have already named one of them: the step trap. However, as already indicated, the feed height can also be viewed critically. We, therefore, explain what to look out for!

If the nets are attached close to the ground, the horses can get caught with their hooves. In the case of close-meshed networks, this risk is reduced, but not completely eliminated. Horses that have just been shod can still get caught in the irons.

That is why hay nets over troughs or suspended from ceilings are more suitable. For floor feeding, however, a closed area with “windows” that are large enough for the head and neck, but through which the whole body does not fit – so no hoof can land on the net.

If a hay bag or basket hangs too far from the ground, the horse will adopt an unnatural posture. With its head raised, it pushes its lower jaw backward and the incisors are no longer one on top of the other. The animal, therefore, needs more force to chew, as it has to push its lower jaw forward – this can cause uncomfortable pain in the long run.

So make sure not to hang the net too far from the ground. An elongated sack is also well suited because here the horses can vary their posture – either they eat at the lower end or they stretch, as is comfortable for them. Because only the permanent lifting of the head does not benefit them. The short distances, however, are not a problem, after all, they also eat leaves from trees in nature.

Pay attention to these tips and tricks, then nothing stands in the way of net feeding. Because basically, one fact remains: The hay net is a wonderful and inexpensive variant to control the feed consumption of your horse without having to do without permanent feeding.