With its red color and almost round body, this frog from the island of Madagascar looks a bit like a tomato. That’s where his name comes from: his name is Tomato Frog.

The tomato frog belongs to the family of narrow-mouthed frogs and thus to the amphibians or amphibians. It looks quite different from our native frogs: its body is squat and almost rounded on top. The tomato frog has a broad head, a short snout, and even teeth. The eyes have round pupils and are set wide apart on the head. The eardrums of the ears can also be seen on the right and left of the head.

The most striking thing is the color of the tomato frog: it is orange, red, or reddish-brown on its back. The belly is yellowish-white and sometimes has black spots on the throat. With a length of ten centimeters and a weight of up to 230 grams, the females are larger than the males. They only grow six and a half centimeters long.

The tomato frog cannot jump like our frogs because its legs are quite short. At best, he can climb a bit. The tomato frog has webbed feet and so-called digging calluses on its hind feet, with which it can dig itself into the ground.

Where do tomato frogs live? 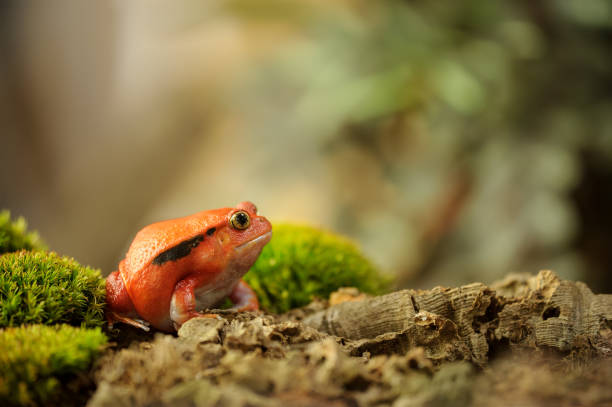 The tomato frog has a tiny distribution area: it only occurs on the east coast of the island of Madagascar off East Africa. And even there he only lives in a certain region: namely from the bay of Antongli to the region south of Tamatave. The tomato frog lives mainly on the ground. It is mainly found in the foliage layer of the rain forests.

What types of tomato frogs are there?

There are two other close relatives of the tomato frog in Madagascar. One of these is the Southern or Spotted Tomato Frog. He also lives on the east coast of Madagascar, but a little further south.

How old do tomato frogs get?

Tomato frogs can live up to five years.

How do tomato frogs live?

Tomato frogs are active at dusk and at night. The animal usually spends the day buried in the ground or hidden in the leaves. It only comes out of its hiding place when it gets dark. Then the frog goes in search of food and catches insects, insect larvae, snails, earthworms, and other small amphibians. Tomato frogs need a moist habitat. When the dry season begins in Madagascar, the animals, therefore, enter a resting phase and survive the time dug protected in the ground.

When tomato frogs feel threatened, they puff up and squirt a secretion from their skin glands. The beam can reach several centimeters. This secretion is an irritating liquid that can even cause skin swelling in humans.

How do tomato frogs reproduce?

When the rainy season begins in March, it is time for the tomato frogs to reproduce. Then the animals migrate into shallow pools and ditches filled with water. At night, the males make loud courtship calls. This song consists of a long sequence of up to 60 individual tones. Overall, the courtship song of the tomato frogs sounds a bit like cackling chickens.

When mating, the male clutches the female. After the female lays the eggs, they float on the surface of the water like a thin film The eggs are tiny, measuring only three millimeters. They are colored black and white. A female can lay about 1000 to 1500 eggs. The transparent tadpoles, which are only six millimeters in size, hatch after just two days. They have no legs but a tail. And they breathe like fish with gills.

After about two to three months, they are already four and a half to five and a half centimeters tall. Then the transformation into a frog begins, the so-called metamorphosis: the legs grow, the animals recede their tails and begin to breathe with their lungs. Finally, they go ashore. At this time, they still look very different from their parents: they are yellow in color. Only when they are about two centimeters tall do they get the typical red color. They become sexually mature at about a year.

How do tomato frogs communicate?

Even outside of the mating season, the frogs make sounds reminiscent of the cackling of a chicken. 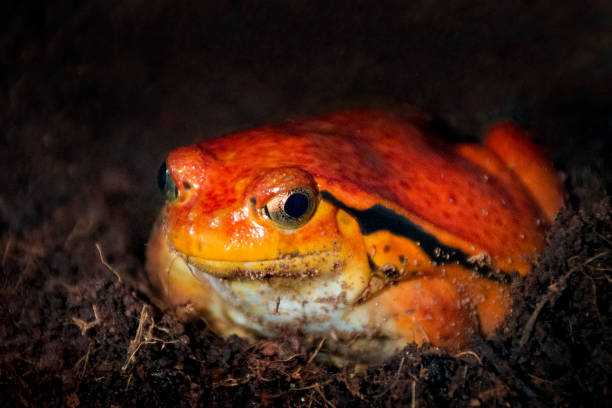 What do tomato frogs eat?

Tomato frogs feed on insects, snails, larvae, worms, and other small amphibians. Sometimes they even eat small vertebrates such as young mice.

How do you keep tomato frogs?

Tomato frogs are kept in only a few zoos. They need a terrarium with plenty of water and a bottom layer of sand and soil to burrow into. The temperature in the terrarium must be 23 to 28 degrees and the humidity must be between 80 and 90 percent.