Some happily let the dog lick both his face and the ice cream while others shudder at the mere thought. But how is it really? Is it harmless or not? We had a chat with the ethologist Carro Hellgren.
In fact, the dog’s saliva is changed very often. They have a constant flow of stimulating saliva in the mouth, which keeps the bacterial flora in healthy balance, says Carro Hellgren.

– It comes directly from the salivary glands and is there to prepare the mouth for food intake and also to clean the mouth. If we ourselves are healthy, we can salivate a healthy dog. On the other hand, there can of course be residues of other bacteria in the dog’s mouth if it, for example – woe and horror but it happens, unfortunately – has eaten feces when it has been out. Those bacteria are harmful and do not belong around our mouths.

– You really do not want those dog kisses, says Carro. But for the dog, licking us in the face is nothing more than a psychosocial behavior, their way of showing that they like us. But then maybe they do not need to enter the mouth when they lick us.

Carro says that studies have been done, however with human saliva, which shows that wound cells heal better in a saliva bath. That is, saliva has a healing effect on wounds. The dogs, like other animals, have a strong instinct to lick their wounds over and over again, although we often try to prevent them from doing so.

– If you have a superficial wound, you have to distinguish between superficial and deeper wounds here, the saliva probably has a healing effect, says Carro.

So even though some of us think that this with dogs and their licking is among the most disgusting there is, in most cases it is completely harmless.

– If the dog does not have a disease that is transmissible to humans, and if it has not just recently eaten feces or other scary, it is completely harmless with dog kisses on the face or a lick on the ice cream for that matter. My dogs have had to fetch pacifiers that my children have lost and when I was younger I could share ice cream with my dog. Today I do not do that, but because of what the ice cream contains, says Carro.

That the dog more than wants to taste our food has its explanation in our common history. It was the wolves who hung out mostly with the people and shared food with those who became domesticated. Eating our food waste is thus a natural driving force in many dogs. 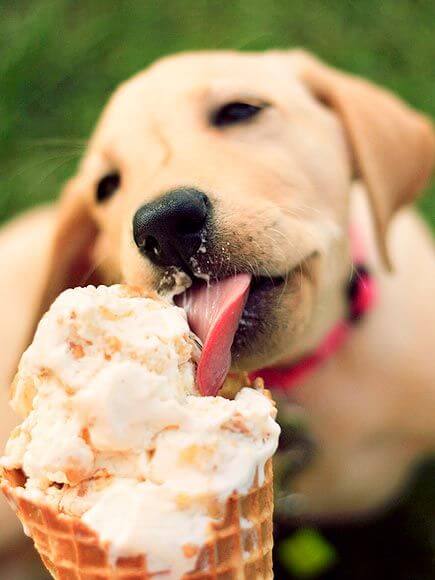 – Then we can always teach them new habits. It is we who choose what limits we want to set for the dog. And everyone there thinks very differently. But if you think, for example, that it is uncomfortable with dog kisses on the face, you can reach out your hand instead and teach the dog to kiss it, says Carro.

Sometimes it’s probably also about social control. You may not think it’s particularly disgusting that the dog takes a lick on the ice cream or gets a sip from the water glass, but what should others think?