Monitor lizards are reminiscent of primeval lizards. The sometimes very large and imposing animals are very fast and skillful predators.

Monitor lizards belong to the class of reptiles and there to the order of scaled reptiles. As is typical for lizards, their body is elongated and covered with scales. They have four relatively long legs, each with five fingers, the hind legs are longer than the front legs. The head is clearly separated from the neck, the snout is pointed. The tail is usually longer than the body. Like all reptiles, monitor lizards are cold-blooded, which means their body temperature depends on the temperature of their surroundings.

The smallest monitor species is the short-tailed monitor lizard. It measures just 23 cm from the snout to the tip of the tail and weighs 17 grams. The largest monitor lizard is the Komodo dragon. It grows up to three meters long and weighs up to 70 kilograms. The typical feature of monitor lizards is their long tongue, forked at the tip, which can be twice as long as the head. 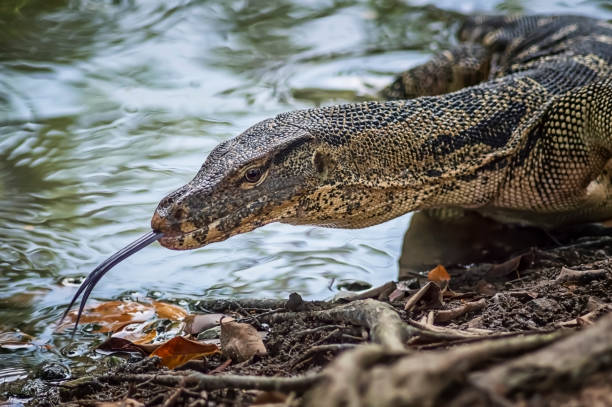 The nostrils are round or slit-shaped and sit either directly on the snout, in front of the eyes, or in between. They are an important differentiator. Because there are so many species, the coloring of monitor lizards is very different. The basic color is usually used for camouflage in the respective habitat. The emerald monitor lizard is bright green and the Panay monitor lizard is black. Others have patterns of dots or cross bands. And usually, the belly is lighter than the back.

Where do monitor lizards live?

Monitor lizards live almost exclusively in the tropics and subtropics, and only to a small extent in temperate regions. They can be found in almost all of Africa, on the Arabian Peninsula, and across Central and Southern Asia to Southeast Asia and Australia. Some species even inhabit islands in the Pacific like the Solomon Islands, the Marshall Islands, and some others.

The different monitor species live in very different habitats. Some live exclusively on the ground, others in trees. Some species also go into the water. Some are found in rainforests, others in deserts and mangroves, some near towns and villages.

What monitor species are there?

How old do monitor lizards get?

In captivity, many monitor lizard species live for about ten years, some up to 20 years. The Komodo dragon can probably live up to 30 years.

How do monitor lizards live?

Monitor lizards usually live in so-called action areas – this is the area in which they mainly stay and look for food. However, these areas are not defended against conspecifics like a territory. The animals are loners. When they meet, they usually avoid each other.

Clashes only occur when it comes to loot. During such fights, they tongue vigorously, nod their heads, and blow out their throats. Sometimes they also stand up on their hind legs, wrap their front legs around their opponent and try to push them down. 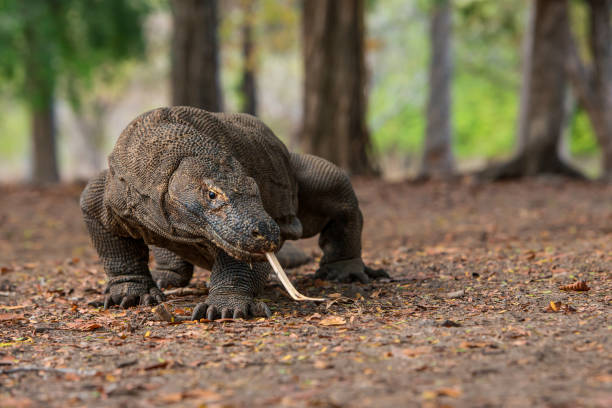 Monitor lizards are diurnal and see quite well. They are particularly good at perceiving movements. For example, they can recognize a person from a distance of 200 meters. When night falls, they retreat to tree hollows, underground burrows, rock caves, or other hiding places. They usually sunbathe first thing in the morning to warm up their bodies. If it is very hot at midday, they retreat to their hiding places.

Monitor lizards have an excellent sense of smell. They stick their forked tongues out of their mouths, move them back and forth, and then pull them back into their mouths. With the help of the tip of the tongue, odor particles from the air are brought to Jacobson’s organ, the olfactory organ of the monitor lizard, which is located in the mouth on the roof of the mouth. With this “tongue” they can also detect faint smells and even buried prey. The animals have a very powerful heart, large lungs and they breathe very efficiently. Their bodies can therefore absorb much more oxygen than that of other scaled reptiles. This makes monitor lizards particularly strong and persistent.

They can sometimes run quite fast. In short sprints, the Komodo dragon can reach a speed of up to 18.5 kilometers per hour. Because there are dry seasons in the homeland of most monitor lizards, when the animals can hardly find any food, they put on fat pads at the base of the tail in good time. They feed on this fat in the dry season.

According to recent research, monitor lizards have poison glands in their lower jaw, so their saliva is poisonous. It is not yet known exactly how the poison works. However, it is known that it inhibits blood clotting. Monitor lizards are considered intelligent. In captivity, they can become very tame and distinguish their keeper from other individuals.