A colorful reptile with a powerful voice, male Tokee emits loud calls that sound like a dog’s bark.

Tokees are reptiles that belong to the gecko family. This family is also called “Haftzeher” because the animals can walk on vertical walls and even on panes of glass. Tokees are fairly large reptiles. They are about 35 to 40 centimeters long, half of which is taken up by the tail.

Their coloring is striking: the basic color is gray, but they have bright orange dots and spots. The belly is light to almost white and also spotted orange. Tokees can change the intensity of their color somewhat: it gets weaker or stronger depending on their mood, temperature, and light.

Their muzzle is very large and wide and they have strong jaws, their eyes that are amber yellow. Males and females are difficult to tell apart: females can sometimes be recognized by the fact that they have pockets behind their heads in which they store calcium. The males are usually slightly larger than the females. A typical feature of the tokees are the toes on the front and rear legs: there are wide adhesive strips with which the animals can easily find a footing and walk even on very slippery surfaces. 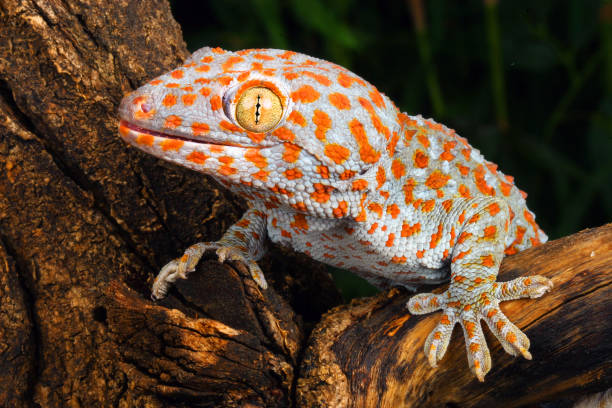 Tokees are at home in Asia. There they live in India, Pakistan, Nepal, Burma, southern China, almost all of Southeast Asia, and the Philippines, as well as New Guinea. Tokees are true “cultural followers” and like to come into gardens and even into homes.

What types of toke are there?

Tokees have a huge family: the gecko family includes 83 genera with around 670 different species. They are distributed across Africa, southern Europe, and Asia to Australia. Well-known geckos include the tokees, the leopard gecko, the wall gecko, and the house gecko.

How old do Tokees get?

Tokees can live to be over 20 years old.

Tokees are mostly active at night. But some of them wake up in the afternoon. Then they go hunting and look for food. During the day they hide in small niches and crevices. Tokees, like other geckos, are known for their ability to run up even the smoothest of walls. This is made possible by a special design of their toes: there are wafer-thin lamellae, which in turn are densely covered with tiny hairs that can only be seen under a microscope.

They are only a tenth as thick as human hair, and there are around 5,000 of these hairs per square millimeter. These hairs, in turn, have the tiniest balls at their ends. They allow the tokee to hold on to smooth surfaces in such a way that they can only be released with force: If the tokee puts one foot down firmly, the sole of the foot widens and the hairs are pressed onto the surface. The Tokee slides a little along it and sticks firmly.

The pretty lizards are often kept in terrariums. However, you have to consider that they can be a nuisance at night with their very loud calls. Also, beware of their strong jaws: tokees will bite if threatened, which can be very painful. Once they bite, they don’t let go easily. Most of the time, however, they only threaten with wide-open mouths.

Friends and foes of the Tokees

Predators and large birds of prey can be dangerous for the Tokees. 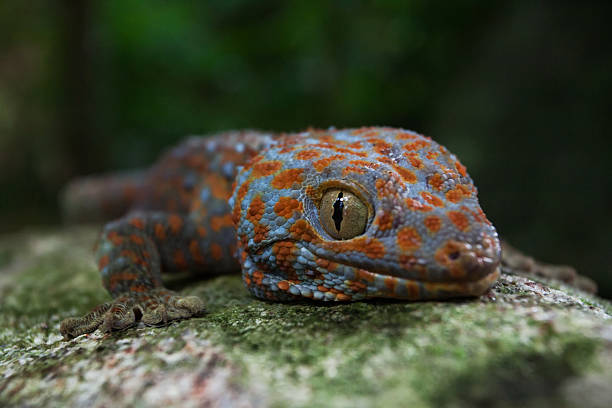 Like all reptiles, tokees lay eggs. A female, if well fed, can lay eggs about every five to six weeks. There are one or two eggs per clutch. Depending on the temperature, the young hatch after two months at the earliest. However, it can also take much longer for the tokee babies to crawl out of the egg. Females lay eggs for the first time when they are 13 to 16 months old.

Tokees take care of the brood: the parents – mostly the males – guard the eggs and later even the newly hatched young, which are eight to eleven centimeters tall. However, if young and parents are separated, the parents do not recognize their offspring and even regard the young as prey. After six months, young Tokees are already 20 centimeters tall, and by the time they are one year old, they are as tall as their parents.

The male Tokees in particular are very loud fellows: They make calls that sound like “To-keh” or “Geck-ooh” and are very reminiscent of a dog’s barking. Sometimes the calls are like loud cackling. Especially in the mating season, from December to May, the males emit these calls; the rest of the year they are quieter.

The females do not call. If they feel threatened, they just snarl or squawk.