With their eye-catching courtship ritual and their iridescent green-blue plumage, the wood grouse is one of the most beautiful birds in Europe. Unfortunately, they have become very rare with us.

Capercaillies grow to be about the size of a turkey, measuring up to 120 centimeters from beak to tail. This makes them one of the largest native birds. They also weigh four to five kilograms, some even up to six. A member of the grouse family, the birds have dark, iridescent blue-green plumage on their necks, chests, and backs.

The wings are brown. They have a small white spot on their sides, and the belly and underside of the tail are also white. Most noticeable is the bright red marking above the eye: the so-called rose. It swells a lot during courtship. In addition, at this time the capercaillie has a few feathers on its chin that look like a beard.

The females are about a third smaller and inconspicuous brown-white. Only the red-brown breast shield and the rust-red and black banded tail stand out from the simple plumage. Some special characteristics show that capercaillie are at home in cold regions: Their nostrils are protected with feathers and in autumn and winter legs, feet and especially the toes are densely feathered.

Where do grouse live? 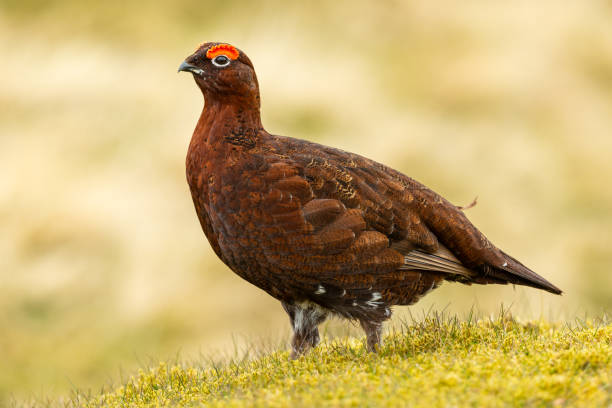 Because they were hunted a lot and there are hardly any suitable habitats left for them, these beautiful birds only live in a few regions in Europe, such as Scandinavia and Scotland. In Germany, there are probably only 1200 animals left. They are mainly found in the Bavarian Alps, in the Black Forest and in the Bavarian Forest.

Capercaillie needs quiet, light coniferous forests and mixed forests with swamps and moors. Many herbs and berries, for example, blueberries, must grow on the ground. And they need trees to retreat to sleep.

What species are capercaillie related to?

There are some closely related species of grouse: these include the black grouse, ptarmigan and hazel grouse. Grouse and prairie chickens are found only in North America.

How old do grouse get?

Capercaillie grouse can live up to twelve years, sometimes up to 18 years.

How do grouse live?

Capercaillie remain true to their homeland. Once they have chosen a territory, they can be observed there again and again. They only fly short distances and live mostly on the ground where they forage for food. In the evening, they hop up trees to sleep because they are protected from predators there.

Capercaillie is known for their unusual courtship ritual in March and April: At dawn, the rooster begins his courtship song. It consists of clicking, wheezing and clattering sounds. The bird assumes the typical courtship posture by spreading its tail in a semicircle, spreading its wings and stretching its head far up. The courtship song ends with a trill that sounds like “kalöpkalöpp-kalöppöppöpp”.

Capercaillie are persevering singers: they repeat their courtship song two to three hundred times every morning; during the main period of courtship even up to six hundred times. Capercaillie grouse have specific courtship sites that they revisit every morning. There they jump into the air and flap their wings before they start singing – usually sitting on a hill or tree stump. Even between the songs, they keep flying, fluttering, into the air.

Once the rooster has impressed a hen with his skills, he mates with her. However, grouse do not marry monogamously: the cocks mate with many hens that come to their territory. However, they do not care about raising the young.

By the way: capercaillie grouse can get pretty weird and even aggressive during the mating season. There used to be repeated reports that grouse then even regarded walkers in the forest as rivals and blocked their way.

Friends and foes of the capercaillie

Capercaillie used to be hunted a lot by humans. Natural enemies are various predators such as the fox. Young grouse in particular can fall victim to it.

How does capercaillie reproduce?

The offspring of the capercaillie is a woman’s job: only the females take care of the brood. A grouse lays about six to ten eggs in a nest hollow between roots or tree stumps on the ground, which she incubates for 26 to 28 days. The eggs are about the size of a chicken egg.

Young capercaillie are precocial: Just one day after hatching, they move through the dense undergrowth on the forest floor, protected by their mother. They remain in the mother’s care for about three weeks but still live together as a family through the winter. Capercaillie hens and their chicks are difficult to spot as they are well camouflaged with their brown and beige plumage. When the young are threatened by predators, the mother distracts them by pretending to be injured: she staggers across the ground with lame wings, attracting the attention of predators.

How do grouse communicate?

The capercaillie’s courtship song is very quiet at first but then becomes so loud that it can be heard 400 meters away. 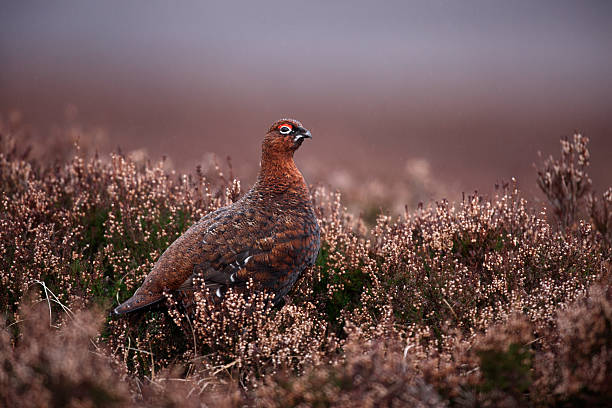 What does the grouse eat?

Capercaillie primarily feeds on leaves, twigs, needles, buds, and, in the fall, on berries. Your stomach and intestines are designed to digest the plant food. They also swallow pebbles, which help break down food in the stomach.

They also like ant pupae and other insects and even occasionally hunt for lizards or small snakes. The chicks and young capercaillie, in particular, need a lot of protein: They therefore mainly feed on beetles, caterpillars, flies, worms, snails, and ants.

Because they are very shy and withdrawn, wood grouse are rarely kept in zoos. In addition, even in captivity, they need a very special type of food that is difficult to obtain, namely buds and young shoots. However, if they are raised by humans, they can become very tame: then the roosters are even more likely to court humans than a grouse.