Their appearance alone earns them respect: hippos are powerful animals that have few enemies to fear in nature.

How do hippos see?

Hippos measure 2.9 to 5 meters from snout to bottom, the thin tail is 40 to 56 centimeters long. The animals are between 150 and 170 centimeters high and weigh 1000 to 3200 kilograms. The males are larger than the females. Their skin is gray-brown to copper-colored, the back is darker than the belly. They often have pink spots around their eyes and ears and on their cheeks. There are only a few bristly hairs on the head and tail.

The four legs are relatively short and strong. There are four toes on each foot with webbed feet in between. The huge head with the snout, which is very wide at the front, is striking. Huge canines and incisors protrude from the upper and lower jaws. The lower canines are up to 50 centimeters long. Nostrils, eyes, and ears are positioned on the head in such a way that they protrude above the surface when the animals are in the water.

Where do hippos live? 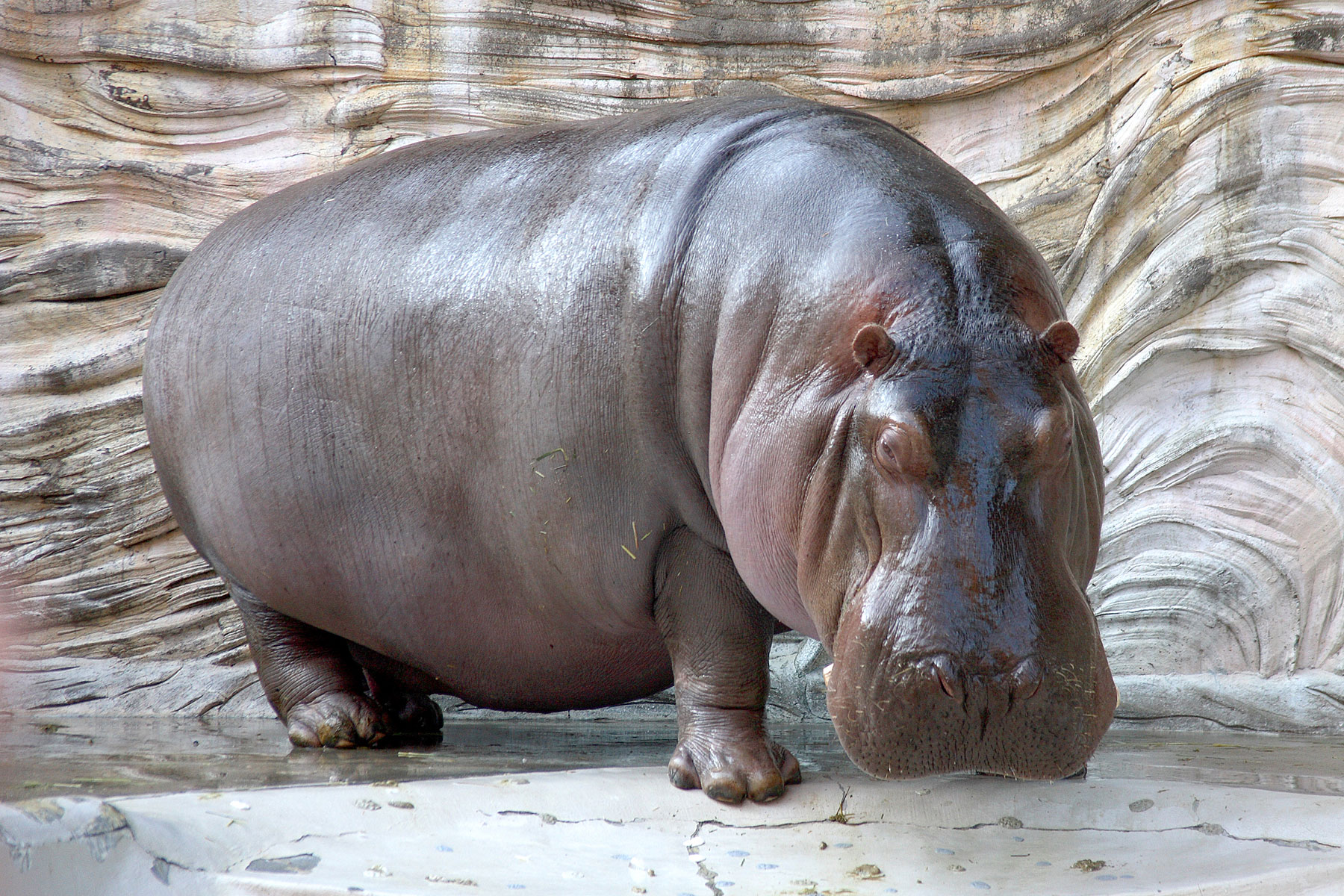 Hippos are now only found in sub-Saharan Africa. They used to be widespread. They have become rare, especially in western Africa. Most animals now live in eastern and southern Africa. In some regions, they are extinct, for example in the Nile Valley in Egypt, where they disappeared in the early 19th century. Hippos need water: they live in regions with deeper lakes and slow-flowing rivers. The bodies of water must have sandbars and be surrounded by grassland for hippos to graze on.

What hippopotamus species are there?

While there were several species of hippopotamus in prehistoric times, today there is only the much smaller pygmy hippopotamus, which lives mainly on land, alongside the hippopotamus.

How old do hippos get?

How do hippos live?

Hippos are active day and night. During the day they sleep for many hours or doze in the water with only their ears, eyes, and nostrils protruding above the surface. They sink to the bottom when they sleep and regularly surface to breathe automatically.

At night, the animals migrate to the surrounding pastures to graze. They can cover several kilometers. Because they keep returning to the same grazing areas, real footpaths are created that entire groups of hippos use to search for food.

Although hippos are well adapted to aquatic life, they are quite poor swimmers. Rather, they walk on the bottom of the water. To breathe, they push off from the bottom to the surface of the water. They usually only dive for three to five minutes. They close their ears and nostrils. On land, the animals are surprisingly fast: they can reach a speed of up to 50 kilometers per hour for a few hundred meters.

Hippos have skin about two inches thick. It acts as an insulating layer and serves to equalize temperature both in water and on land. However, once the animals are on land, it dries out quickly and is also sensitive to the strong African sun.

To protect themselves from sunburn, hippos produce their own sunscreen: skin glands secrete a colorless liquid that turns reddish-brown. It blocks out the dangerous rays of the sun, keeps the skin moist, and also protects it from infections. Ten to 15 animals usually live together in a herd, but groups of up to 150 animals can also form. Especially the females with their young animals form herds, the males tend to be loners.

The males try to form a territory in the water in which a group with several females lives. They defend these territories for life. They mark their territory with large heaps of dung. They also disperse feces by spreading it with swift tail movements, like a whisk. Although the bulls accept males who do not have their own territory into their territory, they are not allowed to mate with the females. 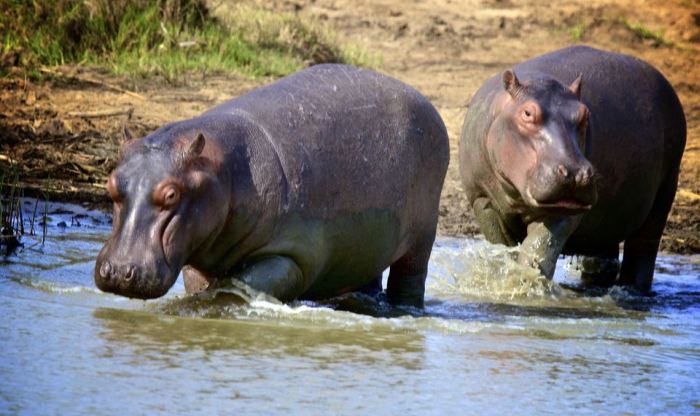 The males make sure that no other territory owners invade their territory. Most of the time the encounter is peaceful. Bulls earn respect by raising their heads above the water, gaping their mouths wide, or staring at one another.

If you don’t succeed in intimidating a rival with this showmanship, violent fights can ensue. The lower canines serve as dangerous weapons, and bulls can often be seen bearing large scars from such fights. Some fights even end fatally. Hippos can also be dangerous to humans. There are reports that especially mothers with young sometimes attack boats.

Friends and foes of the hippo

Adult hippos have almost no natural enemies. They are so big and strong that they don’t even shy away from a fight with crocodiles. Young animals are sometimes prey to crocodiles or predators such as lions, leopards, or hyenas. However, the females usually defend their young very aggressively.

How do hippos reproduce?

Hippos mate in the water. After about eight months, a young is born. Mostly the young are born between October and March or April, but this varies from region to region.

Female hippos have offspring about every two years. Birth takes place in water or on land. A baby hippo weighs around 50 kilograms. It can run and swim immediately, in deeper water the mother often carries it on her back. The little ones are suckled in the water. They always stay close to their mother and also follow her out into the country at night. After about a year, they are weaned and only feed on grass. But they remain close to their mother for around seven years. The animals become sexually mature at around six years of age.

How do hippos communicate?

The males in particular can make wheezing or roaring noises that can be heard from afar.