The Latin name comes from “mus” = mouse and “putorius” = smell bad, because ferrets hunt mice and have a stinky gland to ward off their enemies.

Ferrets are not wild animals but were bred from wild polecats.Like polecats, martens and weasels, they belong to the marten family and are small land predators. Ferrets have an elongated body. The females (females) are about 35 cm long and weigh 550 to 850 grams, the males (males) 40 to 45 cm long and weigh up to 1900 grams.

Ferrets have five clawed toes on each of their short, strong legs. Their long bushy tail is half the length of their body. The head has small, round ears and a rounded snout.

Ferrets can’t see very well: no wonder, because they are mainly active at night and mostly live and hunt in underground burrows. That is why it is much more important for them to hear and smell well. They also have whiskers all over their faces.

Where do ferrets live? 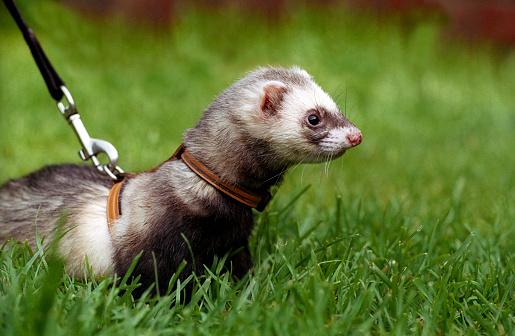 Ferrets are believed to be descended from South European or North African polecats. More than 2000 years ago, Egyptians, Greeks and Romans had bred ferrets to hunt mice, rats and snakes in their homes. Today ferrets are kept as pets; however, on the islands of Sicily and Sardinia there are also ferrets that have gone feral.

Wild European polecats (Mustela putorius) live in a varied little world: They like meadows and small forests and like to stay near a body of water, but also venture into settlements and gardens. They live almost exclusively on the ground and in underground passages and caves. Pet ferrets need a large cage and need daily exercise like a dog. As a substitute for a cave, they use a sleeping house in which they feel safe.

What types of ferrets are there?

The first ferrets that were bred were all albinos: they have white fur and red eyes. Today ferrets come in different colors. The polecat ferrets are particularly pretty. They were created by crossing ferrets with wild polecats. Their undercoat is white to beige, the upper hair is brown to black. Her black and white facial markings are a bit reminiscent of a badger.

How old do ferrets get?

How do ferrets live?

Ferrets are curious and nothing is safe from them: They examine everything that comes their way. They climb on tables and window sills, nibble on everything and rummage around in open cupboards and drawers and in wastepaper baskets.

Sometimes they even carry around pieces of cloth, blankets or scraps of paper and hide them in their sleeping den. That’s why you have to take good care of them when running free. You can easily train ferrets on a leash and then walk them like you would a dog. But one must never forget that they are predators. While they become tame when you get them very young, they can hiss and become aggressive when frightened or frightened. Therefore, an adult should always share responsibility when keeping a ferret as a pet.

Friends and foes of the ferret

To protect themselves, ferrets have stinky glands: they use them to squirt a foul-smelling liquid at enemies to scare them away. Ferrets usually get along well with dogs and cats – especially if they’ve known each other from a young age. However, hamsters, guinea pigs, mice or rabbits cannot be kept together with ferrets: they awaken the hunting instincts of the little predators; a ferret would immediately attack and even kill these animals.

How do ferrets reproduce?

In the beginning, the young ferrets are only nursed by their mother. When they are about three weeks old, the puppies need to be fed at least three times a day. They are separated from their mother at around eight to twelve weeks. They then need their own cage.

How do ferrets hunt?

Like their wild ancestors, the polecat, ferrets primarily hunt mice, rats and snakes. Because they are so long and low, they can easily follow their prey into underground passages and burrows. Ferrets were also used to hunt rabbits in the past: they flushed out the rabbits in their burrows and the hunter then only had to intercept the fleeing rabbit at the other exit of his burrow. What do ferrets eat?

Ferrets eat mostly meat and eat very little plant food. Ferrets are usually given special canned or dry food twice a day, which contains all the nutrients, vitamins, and minerals they need. An adult ferret needs about 150 to 200 grams of food per day.

Ferrets need a cage that is at least 120 x 60 x 60 centimeters. In the cage, there must be a well-padded sleeping area where the ferrets can retreat. The cage should be a real adventure playground, with stairs to climb, tubes to hide, old rags, and lots of other things to play with. The cage can be placed indoors or outdoors in a sheltered spot. But then the sleeping house must be particularly well insulated against the cold.

Ferrets are very clean animals. Only when they change their fur in spring and autumn should the old hair be combed out with a soft brush from time to time. Once a week the cage must be thoroughly cleaned with hot water and neutral soap and the bedding renewed. The feeding bowl and drinking bottle are cleaned daily. And of course, the toilet box has to be emptied and cleaned every day.