Typical of gazelles are their elegant movements and jumps. The delicate even-toed ungulates are mainly at home in the steppes and savannas of Africa and Asia.

Gazelles belong to the order of even-toed ungulates and there – like cows – to the suborder of ruminants. They form the subfamily of gazelles, which includes about 16 different species. All gazelles have a petite, streamlined body and slender, long legs.

Depending on the species, gazelles are as big as a deer or a fallow deer. They measure 85 to 170 centimeters from the snout to the bottom, have a shoulder height of 50 to 110 centimeters, and weigh between 12 and 85 kilograms. The tail is 15 to 30 centimeters long.

Both males and females usually have horns that are 25 to 35 centimeters long. In the females, however, they are usually somewhat shorter. The horns have transverse rings in all antelopes, but the shape of the horns varies between species. In some gazelles the horns are almost straight, in others, they are curved in an S-shape. 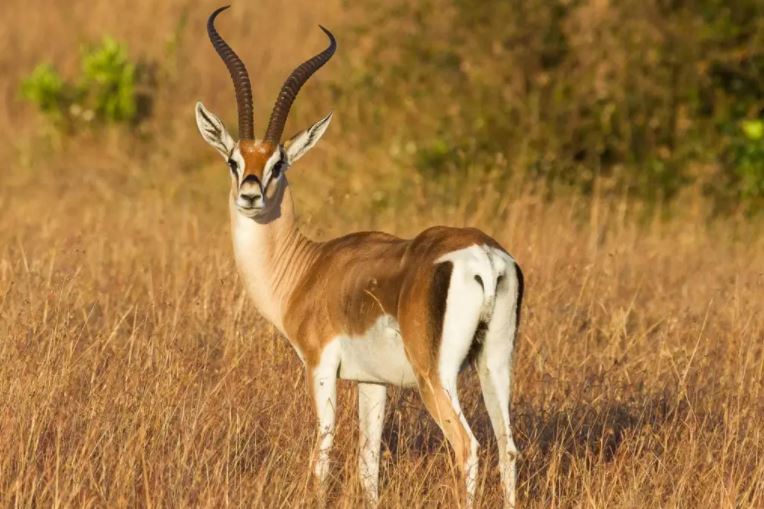 Gazelle fur is brown or yellowish-grey, darker on the back, and white on the ventral side. Many gazelle species have a black stripe running down the sides of the body. Thanks to this coloring and the black stripe, gazelles can hardly be seen in the shimmering heat of the savannas and steppes. The most common and well-known gazelle is Thomson’s gazelle. She is just 65 centimeters high at the shoulder and weighs only 28 kilograms. Their fur is colored brown and white and they have the typical black horizontal stripe on the side.

Where do gazelles live?

Gazelles can be found throughout Africa as well as much of Asia from the Arabian Peninsula to northern India to northern China. Thomson’s gazelle is only found in East Africa. There she lives in Kenya, Tanzania, and southern Sudan. Gazelles inhabit savannas and grass steppes, i.e. dry habitats in which there are relatively few trees. Some species also live in semi-deserts or even in deserts or in treeless high mountains.

What types of gazelles are there?

Researchers don’t yet know exactly how many different gazelle species there are. Today the subfamily of gazelles is divided into three genera and distinguishes about 16 species. Other well-known species besides the Thomson’s gazelle are the Dorka gazelle, the Speke gazelle, or the Tibetan gazelle

How old do gazelles get?

Thomson’s gazelles live up to nine years in the wild but can live up to 15 years in captivity.

How do gazelles live?

After cheetahs, gazelles are the second fastest animals on the savannah. Thomson’s gazelles, for example, can maintain a speed of 60 kilometers per hour for up to four minutes, and their top speeds are even 80 to 100 kilometers per hour. When on the run and running very fast, gazelles often jump high in the air with all four legs. These jumps give them a better view of the terrain and where the enemies are. In addition, gazelles can see, hear and smell very well, so that predators hardly escape them.

Gazelles are only active during the day in the mornings and late afternoons. Some species live in herds of 10 to 30 animals. In the African savannas, where the living conditions are good, there are also herds of gazelles with several hundred or even several thousand animals. In the case of Thomson’s gazelle, the young males live together in so-called bachelor herds. When they become sexually mature, they leave these herds and claim their own territory. Females that come into this territory then belong to this male and are defended against competitors. However, the females repeatedly leave their herd and then join another herd.

Friends and foes of gazelles

Gazelles are very fast and alert, so they have a good chance of escaping predators. Your biggest enemy is the cheetah, which can run at a speed of 100 kilometers per hour for a very short time. If he manages to stalk a gazelle very closely, it can hardly bring her to safety. In addition to cheetahs, gazelles’ enemies include lions, leopards, hyenas, jackals, wolves, and eagles.

How do gazelles reproduce? 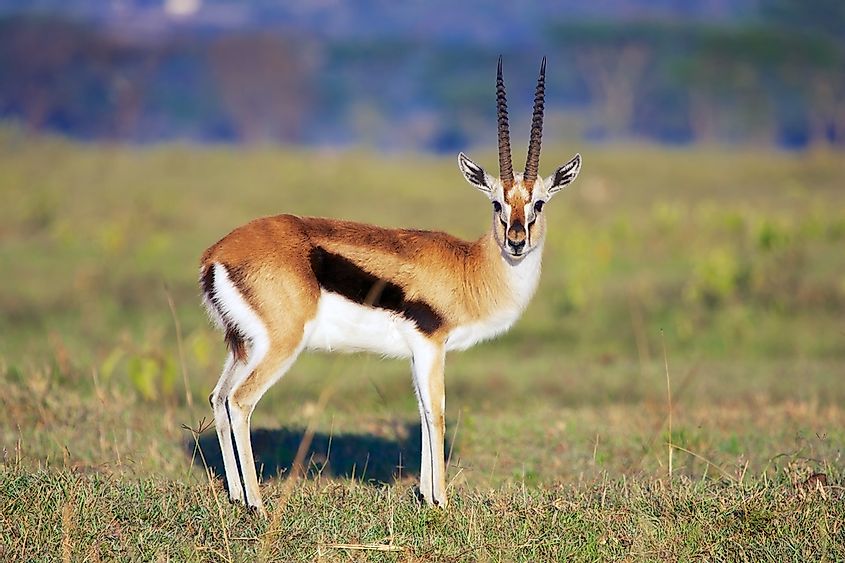 The gestation period for gazelles lasts five to six months. Some species have one young twice a year, others have twins or even three to four young once a year.

Before giving birth, the females leave the herd. They give birth to their offspring alone. Thomson’s gazelle mothers deposit their young in a safe spot and guard the young ones against 50 to 100 meters away. After a few days, the gazelle mothers rejoin the herd with their young.

How do gazelles communicate?

Gazelles communicate with each other primarily by tail wagging. For example, if a mother gazelle slowly wags her tail, her young will know to follow her. If a gazelle vigorously wags its tail, it shows its fellows that danger is imminent. And because gazelles usually have a white spot on their buttocks and their tails are black, the wagging of their tails can be seen from afar.

What do gazelles eat?

Gazelles are strictly herbivores and feed on grasses, herbs, and leaves. Sometimes they stand on their hind legs to reach acacia leaves. During the dry season, some gazelle species migrate hundreds of kilometers to wetter areas where they can find more food.