Fruit bats are related to bats. They got their name because their head is a bit reminiscent of that of a dog with the typical snout.

Flying foxes look like our bats and, like them, belong to mammals. Depending on the species, they measure between six and 40 centimeters from head to bottom. The front legs with the wing skin reach spans of 25 to 150 centimeters and the animals weigh between 15 grams and one kilogram.

Fruit bats have a dog-like head and large eyes that allow them to see well at dusk and in caves. Also, they have a very good smell. On the other hand, their ears are relatively small and they cannot hear as well as bats. The tail is short or absent. One of the most well-known fruit bats is the Nile fruit bat. It is also called Egyptian flying fox and belongs to the smaller species:

It is 15 centimeters long, has a 1.5-centimeter long tail, and its wingspan is between 40 and 60 centimeters. However, this makes it significantly larger than our native bats. The Nile fruit bat is grey-brown on the back, the underside is clearly lighter. The males are larger than the females.

Where do flying foxes live?

Fruit bats live in the tropical and subtropical regions of Africa, Asia, and Australia. Where it is humid and warm. 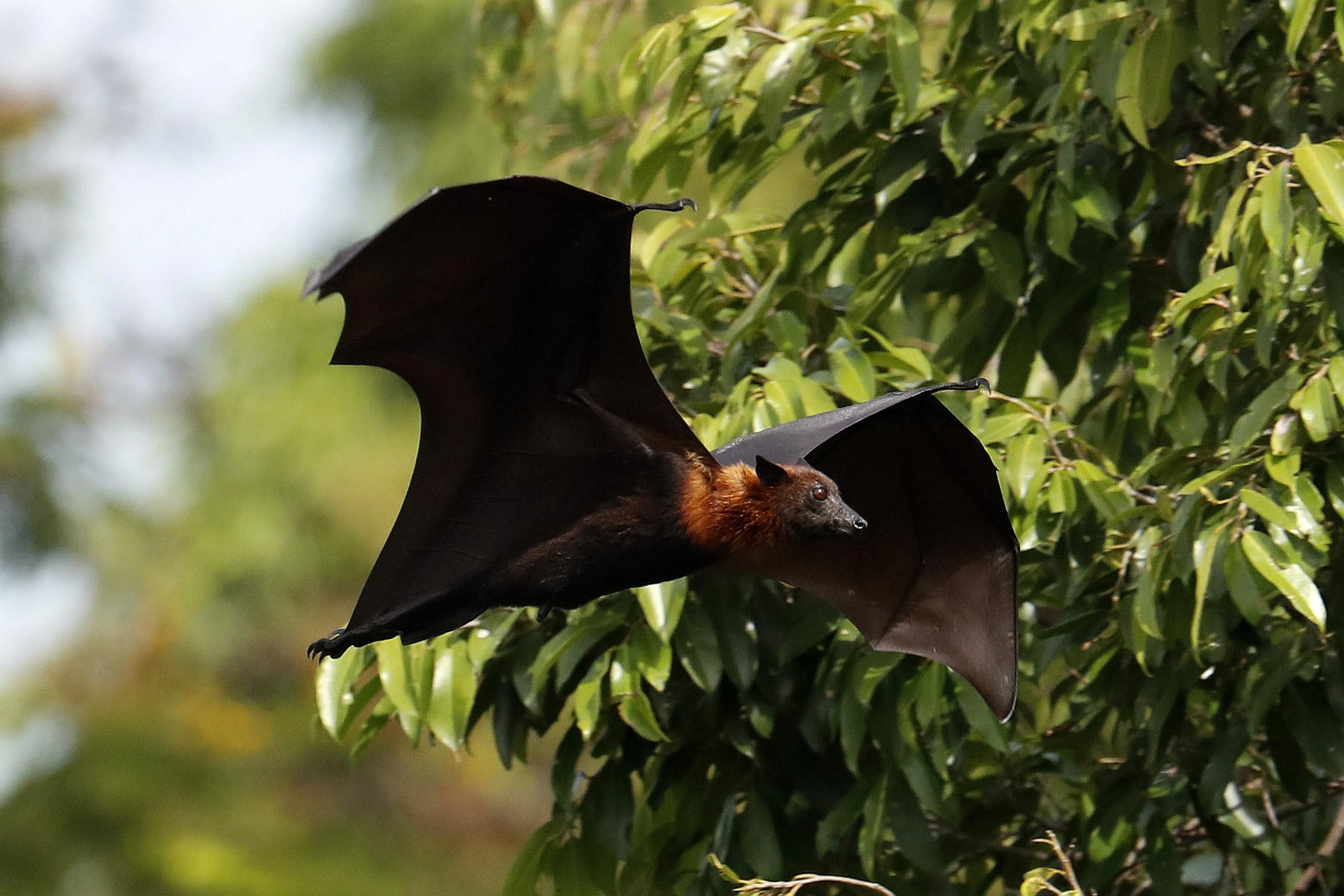 Only one makes an exception: the Nile fruit bat strays to Europe from time to time. Although it is mainly found from Africa, through Iran to Pakistan, it also lives on the Mediterranean island of Cyprus and in southern Turkey. Flying foxes of the tropical regions inhabit the rain forests. They live in trees and bushes, where they feed on the pollen and nectar of the flowers. Others, including the Nile fruit bat, like our bats, often live in caves or ruins, for example in ancient temples and tombs in Egypt. In warm regions, they occur at altitudes of up to 1600 meters.

What flying fox species are there?

How old do fruit bats get?

Not all flying foxes know how old they can get. However, Nile fruit bats that have lived in human care are known to live up to 22 years.

How do flying foxes live?

Depending on the species, flying foxes live individually or in colonies. Nile fruit bats, for example, are very sociable and live in groups of up to 2000 animals.

Unlike bats, most flying foxes cannot use ultrasound to orient themselves. However, there are species, such as the Nile fruit bat, which, like our bats, also use echolocation to orient themselves. They emit sounds in the ultrasonic range, which are produced with the tongue and sound like a double click. These sounds are reflected off objects or other animals like an echo.

The Nile fruit bats perceive this echo and can thus precisely recognize obstacles and fly around them. However, their echolocation does not work as perfectly as in bats. Fruit bats, therefore, use their sense of smell and their eyes, with which they can see well even in the twilight, to find their way around.

Many fruit bats, like the Nile fruit bat, are active at dusk and at night. They only really wake up when the sun goes down. 20 to 40 minutes after sunset they then set out in search of food. During the day, they mostly sleep by hanging upside down by their hind legs from trees or the ceiling of their den. They have a tendon in their leg that snaps into place once the toes are flexed. That’s why flying foxes don’t fall from the ceiling.

Friends and foes of the flying fox 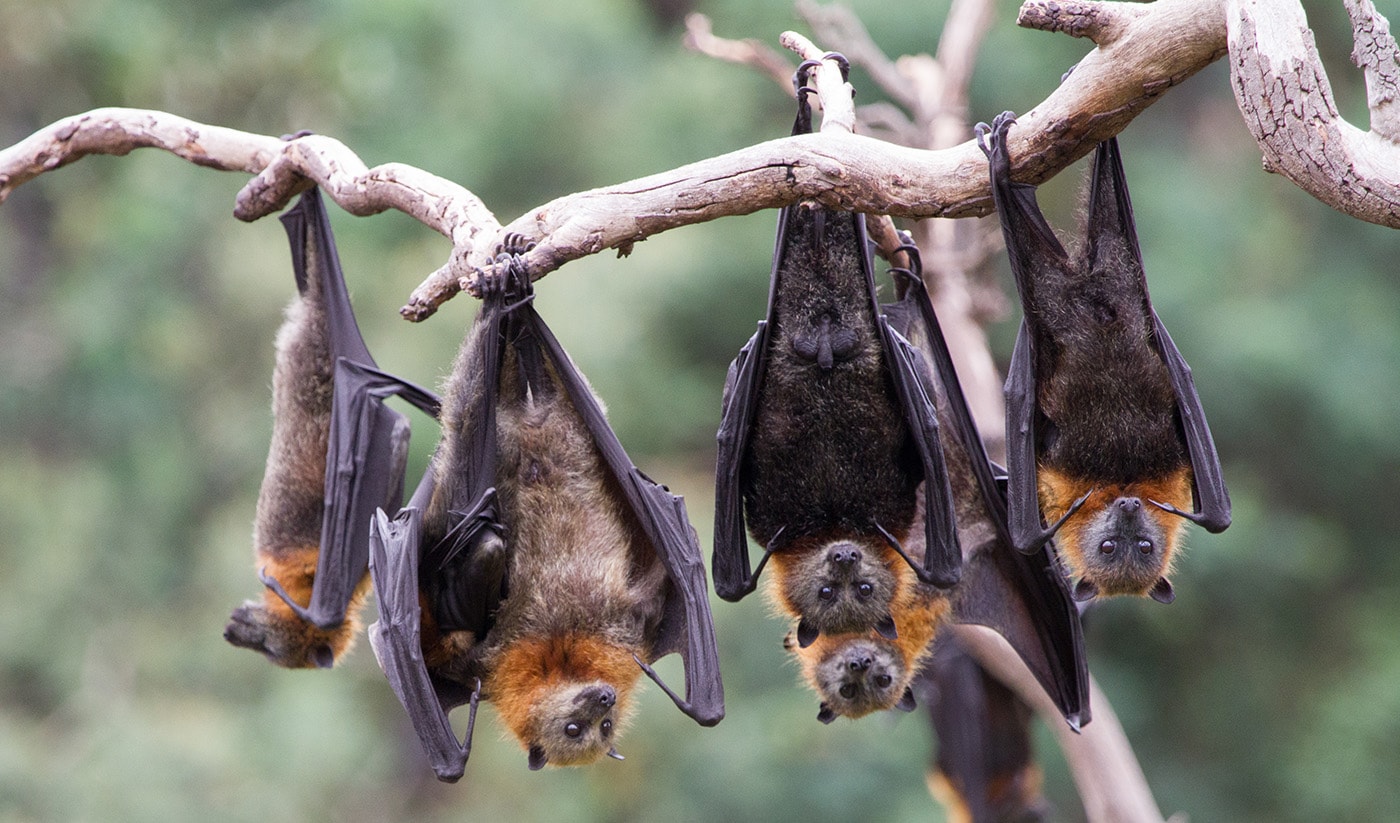 Birds of prey in particular can be dangerous to flying foxes. However, they are also hunted by humans because they are considered pests in orchards.

How do flying foxes breed?

The breeding season for Nile fruit bats in the wild is between June and September. The gestation period lasts four months and usually lasts from October to December or January. Then the females in the burrows usually only give birth to a single young. Only very rarely do they give birth to twins.

How do flying foxes communicate?

When startled at their roosting sites and fleeing, flying foxes may emit a loud screech.