The International Basnight takes place every year in August. To draw attention to the bats, there are then many exciting events about the exciting insect hunters. Maybe also in your area?

Bats are mammals and together with the closely related flying foxes, they form the group of bats. They are not only the only mammals but, along with birds, the only vertebrates that can actively fly. Bats can vary in size. The largest is the Australian ghost bat, which is 14 centimeters long, has a wingspan of 60 centimeters, and weighs around 200 grams. The smallest is the tiny bumblebee bat, which is only 3 centimeters and weighs just two grams. The females are often slightly larger than the males, otherwise, the two sexes look the same.

Bats have thick fur that is usually colored brown, gray, or almost black. The belly is usually lighter than the back. Bats are unmistakable because of their flight skin, also called flight membrane, which stretches from the wrists to the ankles. Skins also stretch between the wrists and shoulders, between the fingers, and between the legs.

The front legs are greatly extended, and the four fingers of the front legs are also extended and help stretch the flight skin. The thumb, on the other hand, is short and has a claw. The five toes of the hind legs also have claws. With these, the animals can hang themselves on branches or rocks when they are resting or sleeping. 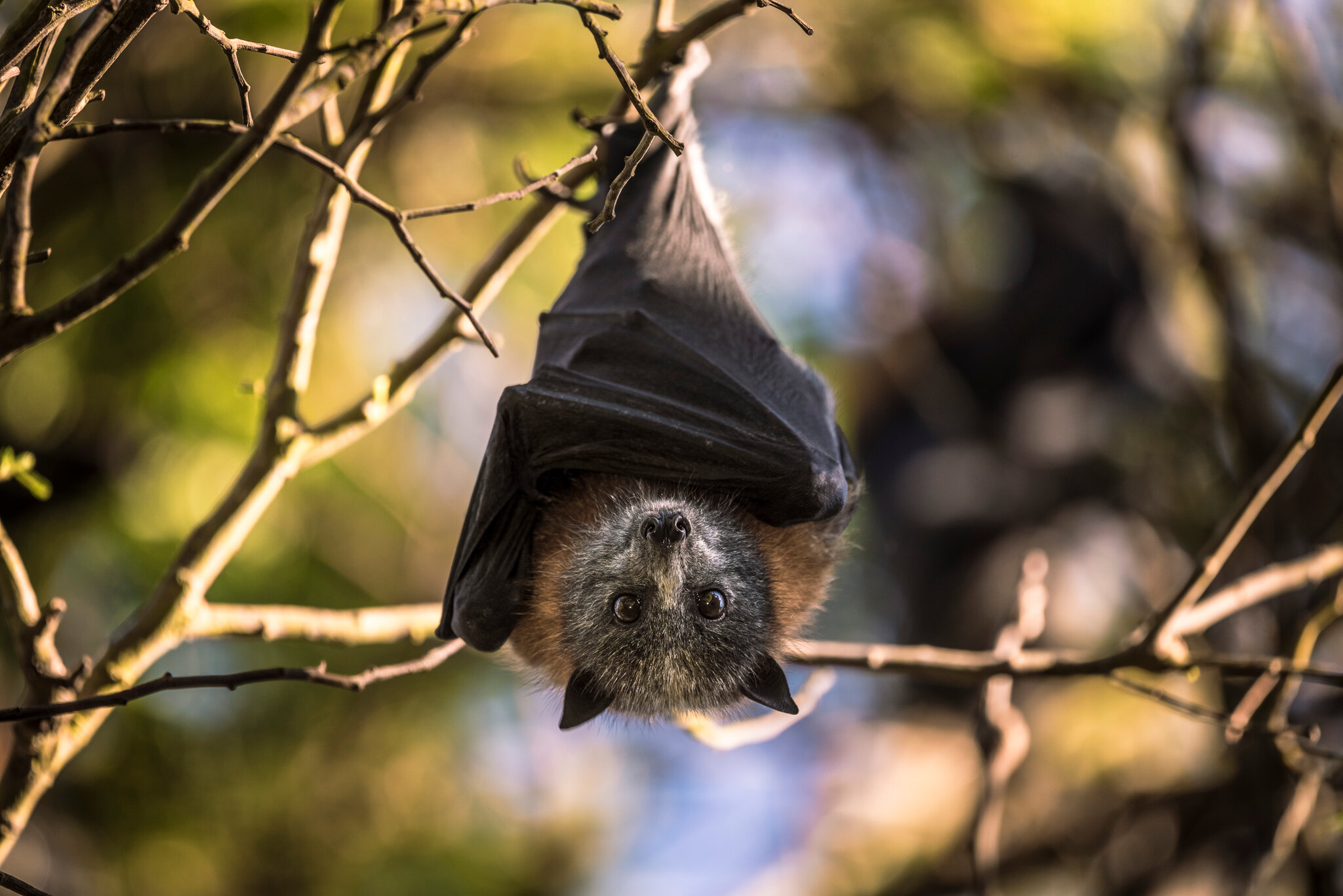 The different bat species differ not only in their size but are particularly recognizable by their faces. Some have specially shaped noses or special structures that amplify the ultrasonic sounds the animals emit. The very large ears with which the animals catch sound waves are also typical.

Bats can see primarily in black and white with their small eyes, but some can also see UV light. Some have sensory hairs around the mouth.

Where do bats live?

Bats can be found on almost every continent on earth, with the exception of Antarctica. They live from the tropics to polar regions. Some of them, for example, the mouse-eared bat genus, are one of the most widespread mammalian genera.

The various species of bats colonize very different habitats: Here they are found in forests, but also in parks and gardens.

What species of bats are there?

Around 900 different bat species can be found around the world. They are divided into seven superfamilies. These include horseshoe bats, smooth-nosed bats, and free-tailed bats. There are around 40 species of bats in Europe and around 30 in Central Europe. The most well-known species here include the common noctule bat, the very rare greater horseshoe bat, the greater mouse-eared bat, and the common pipistrelle.

How old do bats get?

Bats can get surprisingly old, living for 20 to 30 years.

How do bats live?

Bats are nocturnal and use echolocation to navigate in the dark. They emit ultrasonic waves that reflect off objects and prey such as insects. The bats perceive this echo and can thus determine exactly where an object is, how far away it is and how it is shaped. They can even perceive, for example, how fast a prey animal is moving and in which direction it is flying.

In addition to echolocation, bats also use their magnetic sense: They can perceive the lines of the earth’s magnetic field and use them to orient themselves on long flights, similar to migratory birds.

Some species of bats not only fly but are also surprisingly agile on the ground. A few can even swim and launch into the air from the water. Many species of bats are skilled hunters, catching their prey, such as insects, in flight.

Bats spend the day resting and sleeping in their hiding places. These can be tree or rock caves, attics, or ruins. There they usually cuddle up close to each other.

Here in Europe, they are mainly active in the warm season and when autumn comes they look for sheltered winter quarters, for example, a cave, in which they hibernate together with many other species.

Friends and foes of the bat

Bats are mainly prey to predators such as cats and martens, as well as birds of prey and owls. But bats are most threatened by humans because they are destroying their habitats.

How do bats reproduce? 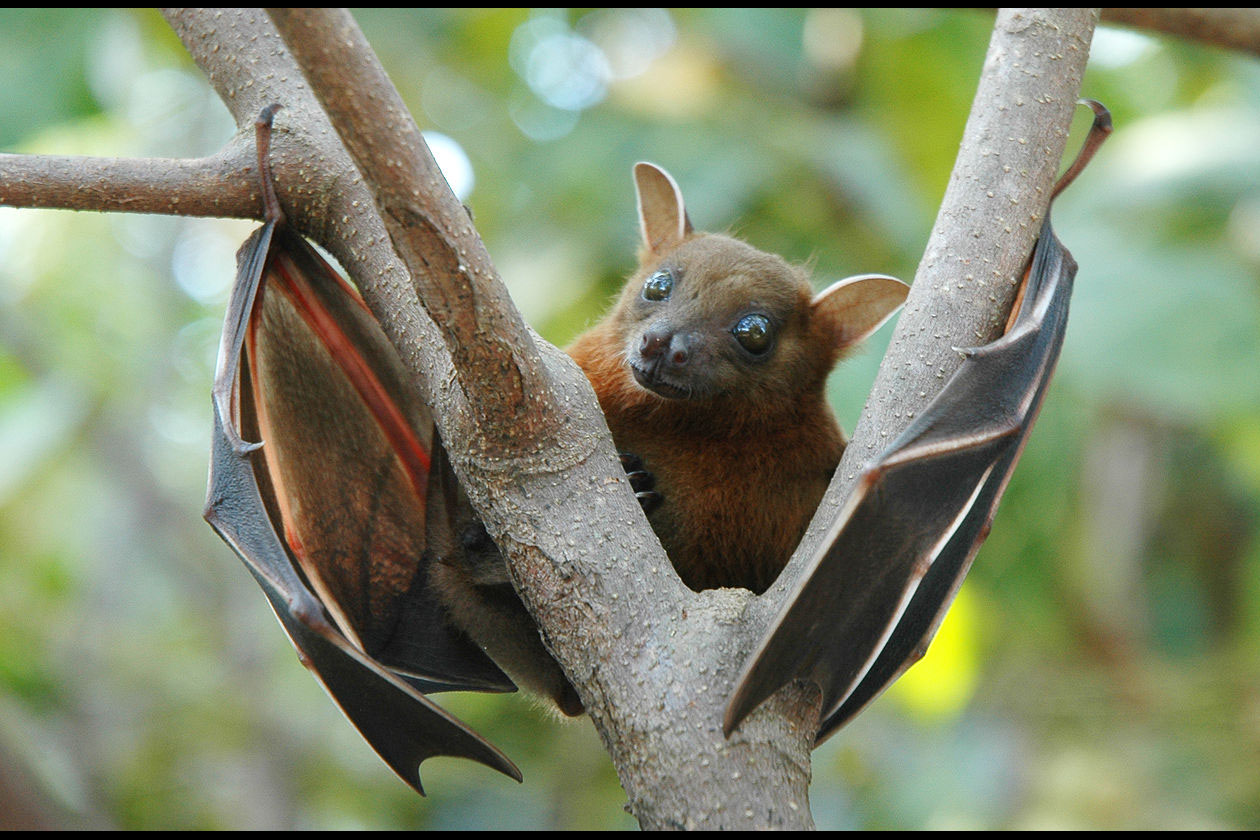 Most bat species only give birth to young ones once a year. As is usual with mammals, they are born alive. Usually, a female has only one young.

In Europe, mating usually takes place in the winter quarters. However, the development of the young is delayed for a long time and these are then born much later in the warm months. The females usually form groups in caves and give birth to their young there. The young are suckled by the mothers. At the end of August, the little bats become independent.

How do bats communicate?

Bats use numerous calls to communicate with each other. However, since these calls are in the ultrasonic range, we cannot hear them.

What do bats eat?

The different bat species feed very differently: some mainly eat insects, others also small vertebrates such as mice or small birds as well as frogs and fish. Other species, which mostly live in the tropics, feed mainly on fruit or nectar. Only three species feed on the blood of other animals by scratching them with their teeth and sucking their blood.