Freshwater stingrays are more feared than piranhas in South America: they can cause painful injuries with their poisonous stingers!

Freshwater stingrays, as their name suggests, are freshwater fish. Like sharks, they belong to the so-called cartilaginous fish. These are very primitive fish that do not have a skeleton made of bones but only made of cartilage. Freshwater stingrays are almost round and very flat in shape. Depending on the species, their body has a diameter of 25 centimeters to about one meter.

Both males and females carry a tail at the end of their body with a calcareous venomous spine about three inches long that falls out every few months and is replaced by a new, regrowing spine. The skin of freshwater stingrays is very rough and feels like sandpaper. This comes from the tiny scales on the skin, also called placoid scales. Like teeth, they consist of dentin and enamel.

Freshwater stingrays are colored differently. Leopold’s stingray has an olive-green to grey-brown upper body with white, yellow, or orange spots with dark borders.

However, the ray is light-colored on the belly side. At the top of the head are the raised eyes, which can also be retracted. Freshwater stingrays can see very well even when the light is dim. This is because their eyes, like cats’ eyes, have so-called residual light intensifiers. The mouth, nostrils, and gill slits are on the underside of the body. 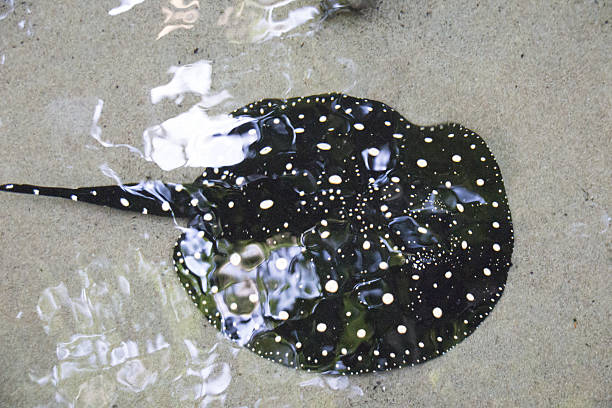 However, as a special adaptation to life on the bottom of the water and in the mud, they have an additional breathing opening: In addition to the gills, they also have the so-called spray hole behind the eyes on the top of the head so that they can suck in breathing water that is free of silt and sand. Rays’ teeth grow back throughout their lives; this means that old, worn teeth are constantly being replaced with new ones.

Where do freshwater stingrays live?

Which freshwater stingrays are there?

Another species, the closely related peacock-eyed stingray, has a larger range. It occurs in large regions in the major rivers such as the Orinoco, Amazon, and La Plata. This species usually has a lighter base color and is larger than Leopold’s stingray. Depending on the region, about 20 different colored variants of the peacock-eyed stingray are known.

How do freshwater stingrays live?

Not much is known about freshwater stingrays. Some species, such as the Leopold stingray, have only been known as separate species since the early 1990s. The researchers don’t even know exactly whether they are active during the day or at night.

They bury themselves in the mud at the bottom of the river to sleep. When awake, they rummage in the ground for food. They hardly swim freely in the water, which is why you rarely see them in nature – or only the almost circular imprint that they leave in the ground when they leave their sleeping places.

In South America, freshwater stingrays are more feared than piranhas: when people accidentally step on the rays lying hidden at the bottom of the rivers. To defend itself, the fish then stabs with its poisonous sting: the wounds are very painful and heal very poorly. The poison can even be deadly in small children.

To avoid such accidents, the people of South America have developed a trick: when they cross sandbanks in shallow water, they shuffle their steps in the sand: they only bump the side of the ray with their foot, which then quickly swims away.

Friends and foes of freshwater stingrays 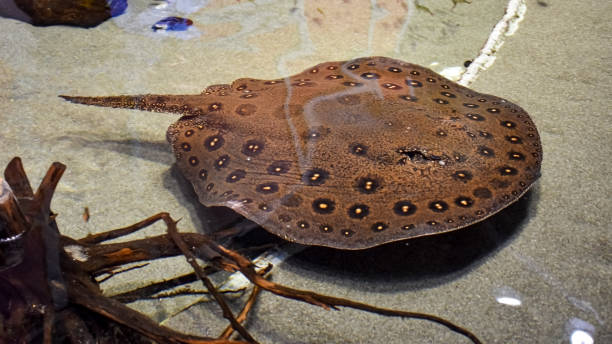 Since freshwater stingrays like the Leopold stingray live very hidden and can defend themselves very well thanks to their poisonous stingers, they hardly have any natural enemies. At most, young rays fall victim to other predatory fish. However, they are hunted and eaten by the locals, and they are also caught for the ornamental fish trade.

How do freshwater stingrays reproduce?

Freshwater stingrays give birth to live young. The females become sexually mature at the age of two to four years. Formating, which can last 20 to 30 minutes, the animals lie belly to belly.

Three months later, the females give birth to up to twelve young, which have a diameter of six to 17 centimeters. The baby rays are already fully developed and completely independent. It is believed, however, that they stay close to their mother for the first few days to protect themselves from predators.

How do freshwater stingrays hunt?

Freshwater stingrays are predatory fish. The fringe-like pectoral fins, on which sensory organs sit, sit on the side of the body. This is how they perceive their prey. As soon as they touch prey with their pectoral fins, they react and carry it to their mouths. They put their whole body over larger fish and flap their pectoral fins down to hold them in place.