For many, the great white shark is the monster from the deep and is one of the most fascinating sea creatures. In reality, it is not a particularly aggressive predatory fish.

The great white shark is one of the so-called real sharks. Because he has the typical shape of a shark: The body is torpedo shaped, making it a perfect swimmer. The snout is conical and pointed. The sickle-shaped caudal fin, the triangular dorsal fin, and the long pectoral fins, which are darkly colored at the tips, are unmistakable. The belly is whitish, the back blue to grey-brown.

On average, the great white shark is 4.5 to 6.5 meters long, some even up to seven meters. Smaller specimens weigh an average of 700 kilograms, the largest up to 2000 kilograms. The mouth is wide and slightly round, the teeth are triangular. The large eyes and the large gill slits are striking.

Where do great white sharks live?

The great white shark is found in almost all seas, especially in temperate regions. However, it also appears in subtropical and tropical seas, where it is usually only found in winter. It is particularly common to see off the coasts of South Africa, Australia, New Zealand, and California.The great white shark hunts in shallow waters near shores where many seals and sea lions live. Otherwise, he usually stays above the continental shelves and on their slopes. These are the areas in the sea where the edges of the continents drop steeply into the deep sea. 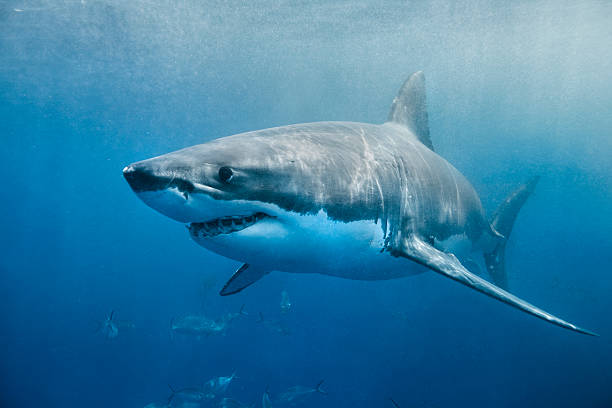 The great white shark swims both directly on the water surface and at depths of up to almost 1300 meters. Sometimes he travels very long distances.

How old do great white sharks get?

It is not known what age great white sharks can reach. However, researchers suspect that they can be about as old as humans. The age of a shark can be roughly determined using its body size: a five to a six-meter-long great white shark is around 21 to 23 years old.

How do great white sharks live?

The great white shark is a perfect predator. Because he has a special organ in his nose: the so-called Lorenzini ampoules. These are openings filled with a gelatinous substance. With these, he can sense the electromagnetic fields of his prey from a great distance. The eyes and nose are much better developed than other sharks. For example, he can also see colors and perceive even the tiniest traces of scent in the water.

In addition, a special network of blood vessels supplies the eyes and nose so that they can react more quickly. Good blood circulation is also a reason why the great white shark has an increased body temperature and is not really cold-blooded and dependent on the temperature of the environment.

The body temperature of the great white shark is always 10 to 15 degrees Celsius higher than the water temperature. On the one hand, this enables him to swim faster and, on the other hand, he can also stay in colder seas. Similar phenomena only exist in other large sharks and in large tuna or swordfish.

When something moves in the water, the sharks swim toward that source of the noise. That’s why it happens that they want to “test” a potential prey animal – which can also be a human – with a trial bite. However, a single such bite inflicts serious injury on humans and is often fatal.

Friends and foes of the great white shark 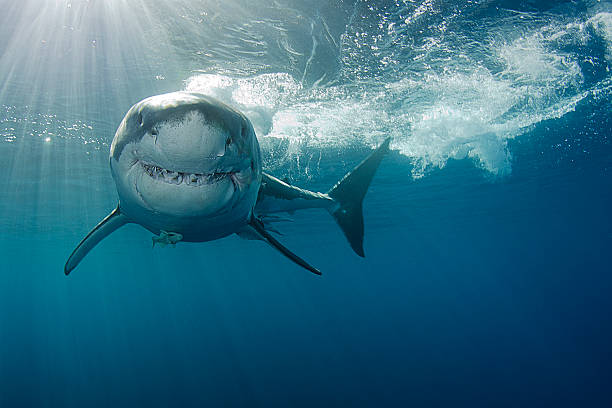 How do great white sharks reproduce?

Not much is known about the reproduction of great white sharks. They are viviparous, meaning the young develop in the womb. However, it is not known exactly how long the females are pregnant. Researchers assume that it takes twelve months for the young sharks to be born. Then they are already up to 150 centimeters long.

It is also not known how many cubs a female can have at one time. Animals with nine young have already been observed. There is a strange phenomenon in the great white shark: it happens that the young fight each other in the womb of the mother