At first glance, fallow deer are reminiscent of roe deer or stags. Luckily, they have one feature that makes them unmistakable: their white dotted fur.

Fallow deer are larger than a deer but smaller than a stag. The animals measure 120 to 140 centimeters from head to bottom and have a shoulder height of 80 to 100 centimeters. The tail measures about 20 centimeters.

The males weigh 53 to 90 kilograms, some even up to 110 kilograms. The females, on the other hand, only weigh 35 to 55 kilograms. Only the males have antlers. It is shovel-shaped, about 55 centimeters long, and weighs two kilograms. In older males, it can also weigh up to four kilograms.

The neck is rusty brown. The underside of the belly and the legs are light in color. The hooves are black. You can’t miss the so-called mirror: that’s what the white part on the bottom of the animals is called. It is outlined in black and the tail, which is also black, stands out very clearly.

In winter, the fur of fallow deer turns blackish on the back and sides, and the underside is gray. The head, neck, and ears are brown-grey. The stains can only be seen very little.

Where does fallow deer live? 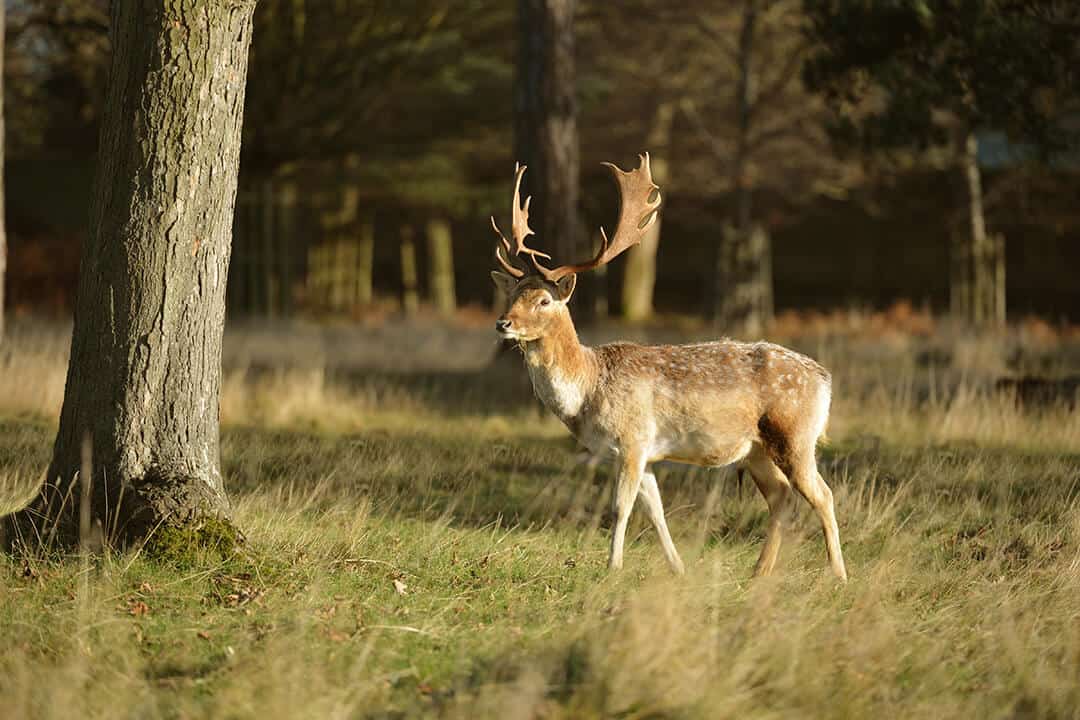 Originally, the fallow deer was at home in central and southern Europe and in Asia Minor. However, it was introduced in other countries centuries ago, for example in Great Britain, and later also in Denmark. From there it came to Central Europe. The animals were mostly kept in game reserves and hunted as a substitute for red deer.

Later, fallow deer were also brought to countries on other continents, such as Argentina, South Africa, Japan, and New Zealand. Fallow deer-like light forests with large meadows. A mixture of forest, meadows, and fields is ideal. The animals find protection and cover in the forest and food in the meadows and fields.

What types of fallow deer are there?

How old do fallow deer get?

Fallow deer live to be 15 to 20 years old. The oldest known animal reached the age of 32 years.

How does fallow deer live?

Fallow deer are very social and always live in packs. However, females and males form separate groups. They only come together during the mating season in autumn. The rather shy animals are active during the day, move quietly across the meadows and graze, or rest lying on the ground.

The animals can move their ears independently of each other and thus locate exactly where a sound is coming from without having to move their heads. This protects them from predators, as they primarily perceive movement. The spotted fur provides good camouflage.

The tail is used for communication: when they are relaxed, it hangs loosely or is slightly moved back and forth. When in danger, they raise it horizontally, and when they flee, it is erected steeply. Since the black tail stands out very well against the white mirror, it is a very good signal for the pack members to see.

The animals remove these scraps by rubbing the antlers on the branches of trees and shrubs – this is called sweeping. This also changes the color of the antlers. It is light at first but darkens with the saps of the plants.

Fallow deer can walk, trot and gallop and jump up to 180 centimeters in height. The animals also perform so-called bouncing jumps, in which they push off the ground with all four legs at the same time and land almost on the same spot again.

Friends and foes of the fallow deer

Thanks to its good senses, fallow deer perceive danger very quickly. The animals flee. At some distance from the source of danger, they stop and observe it very closely. Here fallow deer have hardly any natural enemies, but the animals are hunted by humans. Only young animals can fall prey to foxes.

How does fallow deer reproduce?

During the rutting season between October and December, the animals meet at special rutting grounds. During this time the males let out their rutting cries and fight with each other for the females. They scratch hollows in the ground with their hooves and mark them with their fragrant secretion and urine. All this should attract the females and say to the competitors: This is my territory! 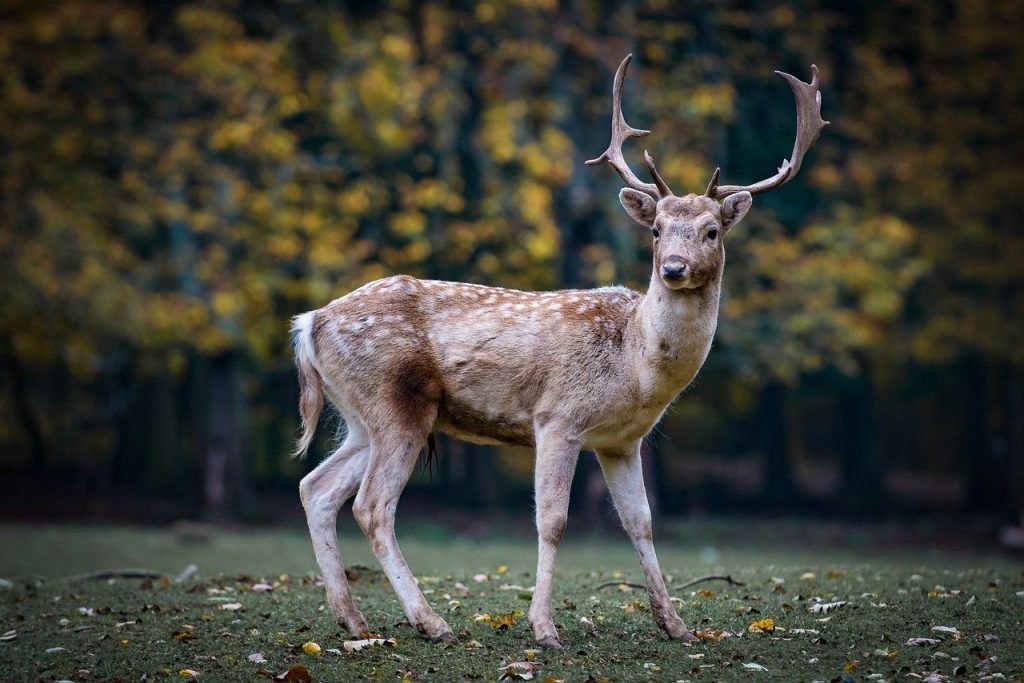 After mating, a female is pregnant for 33 weeks and usually only gives birth to one young. To do this, the female withdraws from her pack and gives birth to her calf in a sheltered place. The calf weighs 4.4 to 4.6 kilograms. After half an hour to an hour, he drinks for the first time and can already stand and walk. When the mother goes to eat, the calf stays behind and hugs the ground. Thanks to its spotted fur, it is well camouflaged there.

After about two weeks, mother and calf return to the pack. There the young form small groups, which are cared for by all pack members. The animals become sexually mature at the age of two to two and a half years. Then the male cubs leave their mother’s pack and join a pack of males.

How do fallow deer communicate?