The badger is a shy animal – that’s why you rarely see it. In the fable, the badger is also called “Grimbart”.

Badgers look like they’re wearing a black and white face mask. The white head has two wide black stripes that start about two centimeters in front of the nose and go over the eyes to the ears. The ears themselves are quite small and have a white border.

Badgers are predators and belong to the mustelid family. Even though they are about as long as foxes, namely 60 to 72 cm, they appear much larger because they are quite chubby:

A badger can weigh 10 to 20 kilograms, while a fox only weighs seven kilograms! Badgers aren’t slim, sporty sprinters, they’re made for life underground: They’re fairly broad and have short legs.

And because they have a broad rump, their gait is a bit waddling. However, they can run fairly quickly and, although they don’t like water, are also good swimmers. 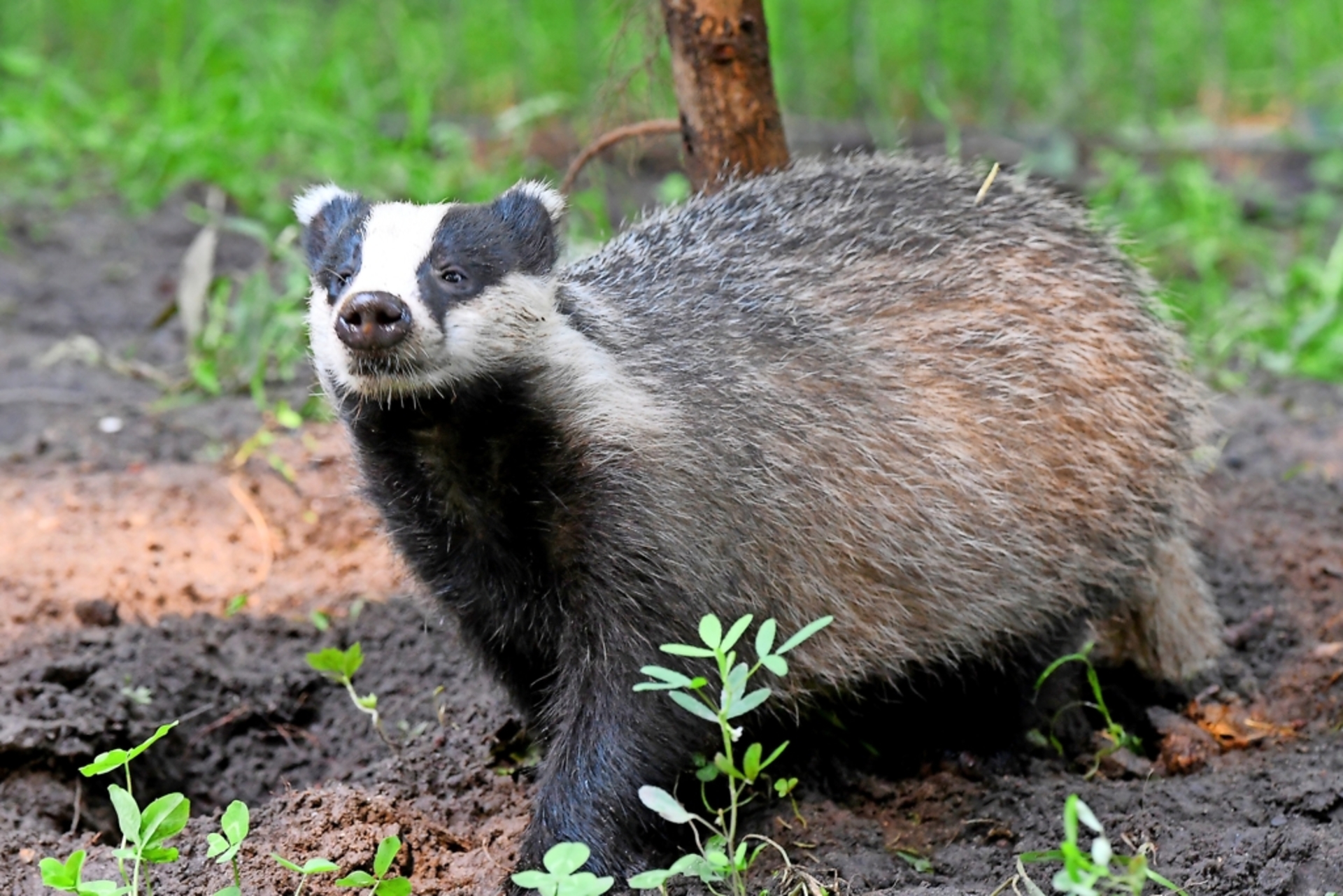 Their bodies are gray with a dark line down their backs, while their legs and neck are black. Their tail is short, measuring only 15 to 19 centimeters. That’s why they remind you a bit of a little bear. The front legs with long, strong claws are excellent tools for digging. And the long snout is great for sniffing and digging in the ground.

Where do badgers live?

Badgers are found almost all over Europe up to the Arctic Circle. They are missing only in Iceland, Corsica, Sardinia, and Sicily. They also live in Asia as far south as Tibet, southern China, and Japan – but also in Russia.

Badgers like forests best, especially they live in deciduous and mixed forests. But they also feel at home in steppes and swamp areas and even in mountains and on the coast. Today, badgers can even be found in large gardens and city parks.

What types of badgers are there?

Our European badger has relatives almost all over the world: the honey badger is found from Africa and Western Asia to Nepal and western India, the giant badger lives in China and western India, the Malayan stink badger on Sumatra, Borneo, and Java, the American badger in North America and various others Sun Badgers in Southeast Asia.

How old do badgers get?

Badgers can live up to 20 years.

How do badgers live?

Badgers are very shy and only active at night. They rarely cross streets, so you almost never see them. At most their burrows can be found:

They are caves dug into the earth, in the entrance tubes of which the “slide channels” can be seen. When the badger crawls into its burrow, its claws dig typical furrows in the ground.

The tubes of the badger burrows lead up to five meters deep into the ground and can be up to 100 meters long. Many generations of badgers often live in one burrow one after the other – this means that first the great-grandparents, then the parents of a badger, and finally its offspring live in the same burrow.

They gradually create real labyrinths and caves at different depths, until the earth is riddled with holes like Swiss cheese. In addition to the badgers, foxes, and martens often live in such a large burrow. The badgers line their burrows with grass and leaves. To keep everything clean, the badgers replace this cushion every spring and bring new grass and leaves into the den. 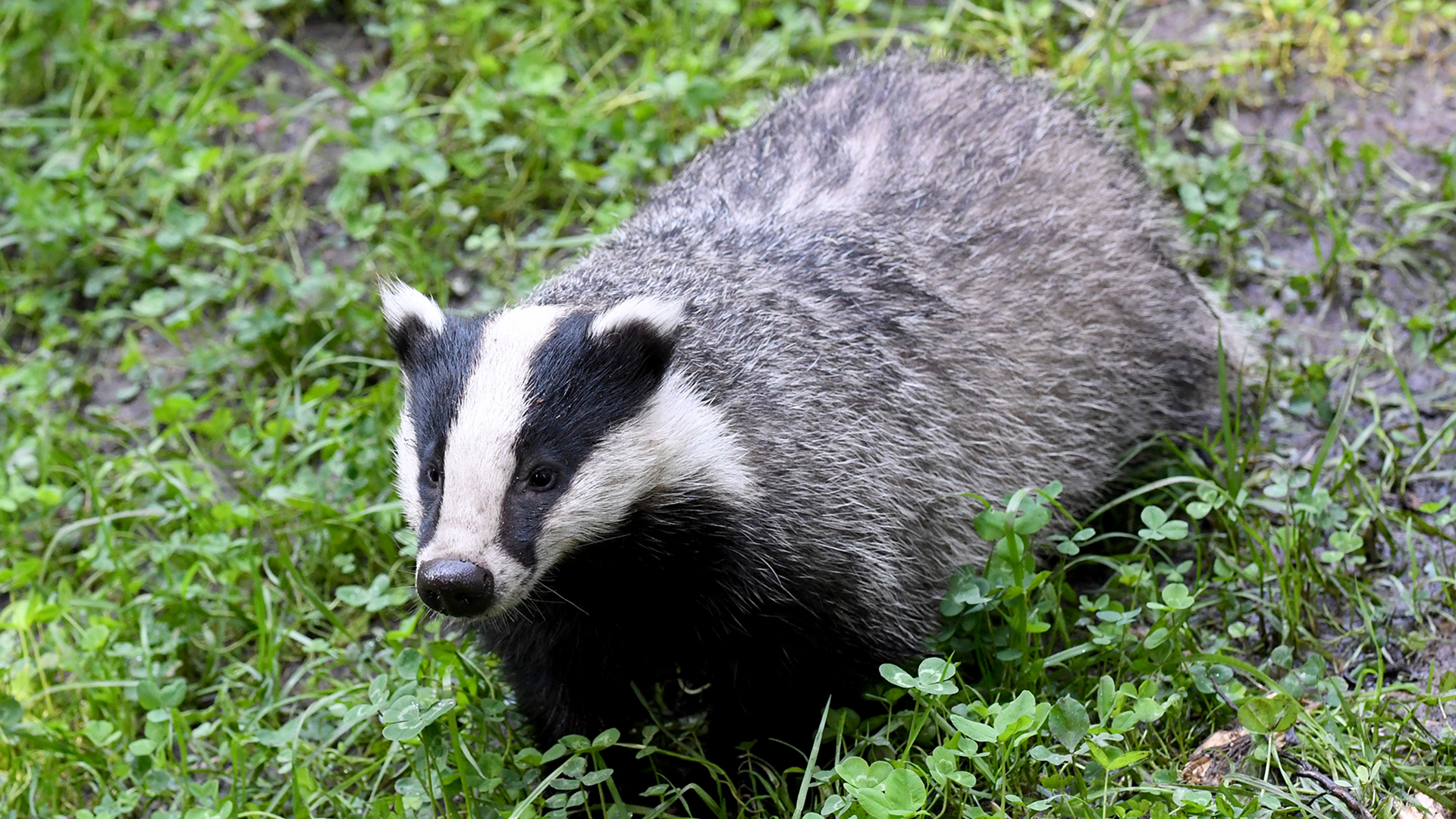 When it gets cold and uncomfortable, badgers often stay in their burrow for weeks. In winter they don’t hibernate but do hibernate. During this time they sleep a lot and live off their thick layer of fat. In spring, when they come out of their burrow for the first time, their fur shakes a bit because they have lost so much weight.

Badgers have a good nose: With their sense of smell, they not only track down their prey but also recognize their family members by their scent. They mark their territories with scent marks. With that they say to their competitors: This is my territory, this is where I live. Badgers live either alone, in pairs, or as families.

Friends and foes of the roof

Badgers’ natural enemies are wolves, lynxes, and brown bears. Here they are hunted by humans. When foxes were killed with gas in their burrows about 30 years ago to combat rabies, many badgers that lived in the same burrows died with them.