Degus look a little like chinchillas but have a much thinner tail.

Degus are rodents. When they were discovered, they were thought to be mice or rats. To some people, they looked like squirrels. Then you realized that degus are much more closely related to guinea pigs and chinchillas.

Her Latin name is Octodon (the word “octo” means “eight” in English). Because the chewing surfaces of their molars are reminiscent of the number eight, the degus got this name.

Degus are about 15 centimeters long. The tail measures 12 centimeters but has short hair and dark, bristly hairs at the tip of the tail.

They look pretty cute with their round ears and button eyes. Degus’s eyes and hearing are very good, allowing them to spot enemies in good time. In addition, they can smell very well and have whiskers all over their bodies, which they can use to orientate themselves even in the dark.

The hind legs of the degus are slightly longer than the front legs, so they are very good at jumping. The feet have claws for gripping and digging. The tail is mainly used by the degus for balancing, they use it to keep their balance when jumping; when they are sitting, the tail serves as a support. It also has another important function:

For example, if a degu is grabbed by the tail by a bird of prey, it tears off and the animal can flee. The injury hardly bleeds and heals; however, the tail does not grow back. You should never hold or lift degus by their tails!

Where do degus live? 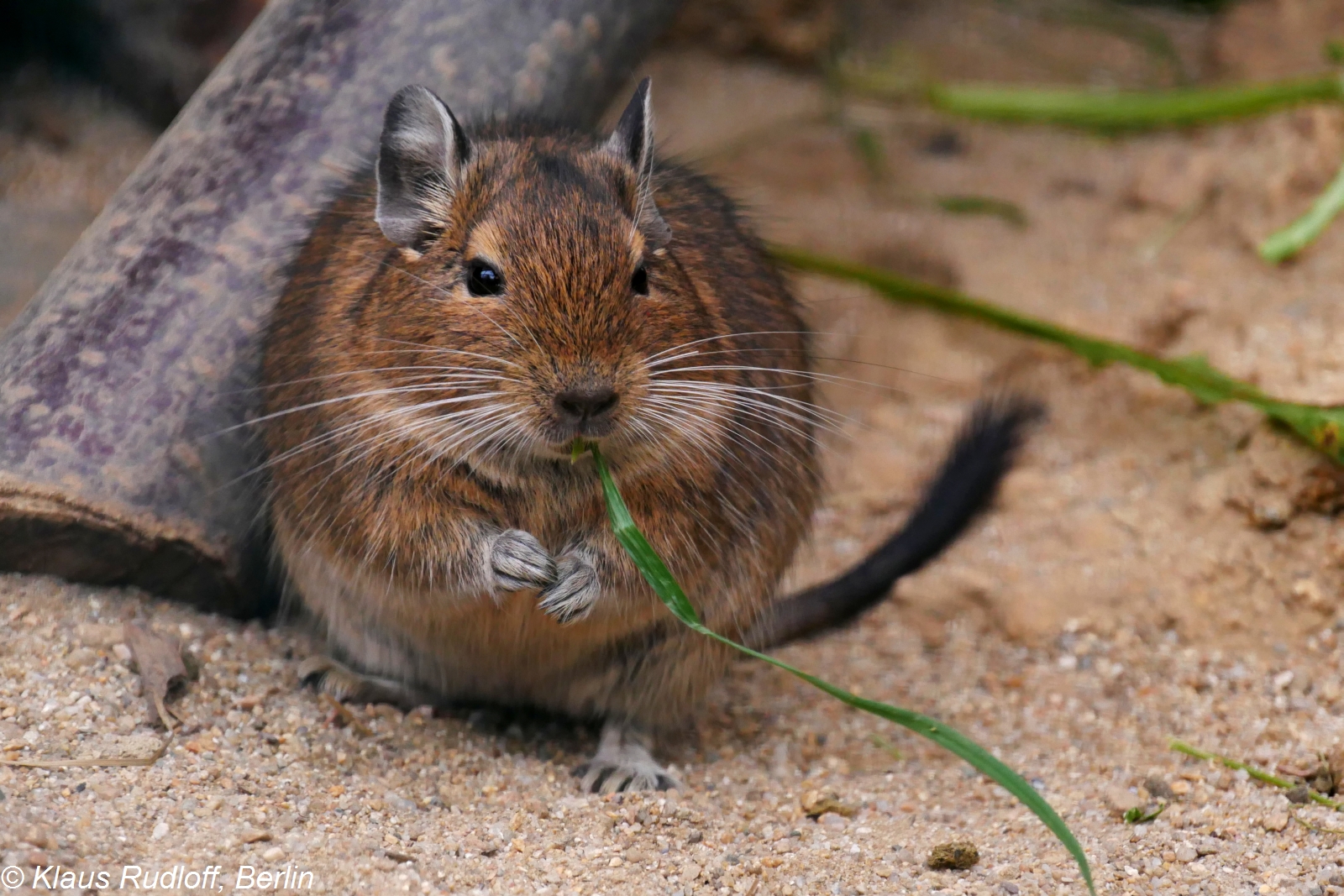 Degus only live in Chile; Chile is in South America. There they inhabit the plateaus and low mountain ranges up to 1200 meters above sea level.

Degus like open country – areas without bushes or trees – because there they have a good overview and can see if enemies are coming. Today, however, they also feel at home on pastures and in gardens and plantations. They live there in underground burrows.

What species are degus related to?

There are no different breeds of degu. Closely related species are the cururo, the South American rock art, and the viscacha rat.

How old do degus get?

Degus are five to six, some up to seven years old.

How do degus live?

Degus are very social animals. They live in families of five to twelve animals. Several males also live peacefully together in these groups. Degus have a territory that they mark with scent marks and defend against intruders – even against conspecifics. Only animals that belong to the family are allowed in the area.

While the others forage for food, one family member is always on guard. Most often this animal sits on a small hill. If danger threatens, it emits a warning cry and all degus flee into their burrows. Degus are mainly active from morning to afternoon. Wild degus live in the wild among many hundreds of animals. They mostly stay on the ground, but sometimes they climb into the lowest branches of the bushes.

Friends and foes of degus

Snakes and foxes, but especially birds of prey, hunt degus.

The little degus are born three months after mating. The females pad the place where they give birth with hay and leaves. The little degus are suckled not only by their mother but also by every other female belonging to the family group. A female degu can have cubs up to four times in a year. Young degus leave the nest on the second day and explore the area. They are suckled for about two weeks. Then they begin to eat solid food but still drink from their mother from time to time.

How do degus communicate?

Degus use many different sounds to communicate with each other. When they are satisfied or greet each other, they make chirping sounds. With a beep, they indicate that they are upset. And if they are not happy with their surroundings, they express it with long, shrill noises.

What do degus eat?

In nature, the diet of the degus is quite meager and simple, they mainly eat grass and bark. Therefore, when they are kept as pets, they are mostly fed hay. They also like vegetables such as endive, lettuce, savoy cabbage, Chinese cabbage, and carrots, and they also eat grass and herbs.

However, degus cannot tolerate fruit because it contains too much sugar. A bit of stale brown bread, dog biscuits, or crispbread are good treats. However, they must not be given too much of it, otherwise, they will become ill. The degus only need water to drink.

Degus are not petted animals. They just want to cuddle with their peers and don’t particularly like people touching them. 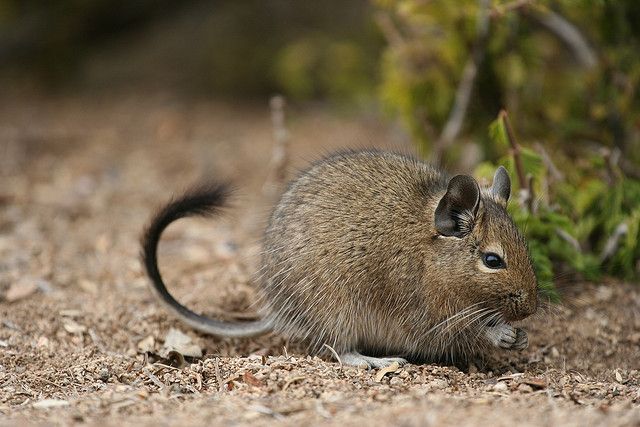 Because degus are very active, they need a lot of space. In addition, you must not keep them alone, but always buy at least two degus, otherwise, they will become lonely and sick. If you don’t want offspring, you can keep two males or two females together.

Normal cages for small animals are not suitable for degus because they like to dig in the litter and scatter everything around. A terrarium made of glass that the degus cannot chew is best.

The bigger it is, the better it is for the animals: for two degus, the floor space must be at least 100 x 50 x 100 centimeters (width x depth x height). Small animal bedding serves as bedding in the terrarium. In addition, degus need caves, which can be built from bricks and a stone slab, for example, and branches to climb.

Degus also like to hide in hollowed-out tree trunks. They need a sand bath to care for their fur. The feeding bowl should be made of porcelain or clay so that the animals cannot chew it. There should always be enough twigs in the terrarium so that the degus can wear off their teeth.

Fur care is usually not necessary, as the degus clean themselves and each other. The sand bath ensures that the fur does not become greasy. If the degus find enough to gnaw and sharpen their claws in the terrarium, their claws and teeth will automatically wear out. If they do get too long, they have to go to the vet so that the animals can eat properly again.