Dolphins are not fish but mammals. They belong to the order of whales, there to the suborder of toothed whales, and to the family of dolphins. Their ancestors were terrestrial mammals that transitioned back to aquatic life millions of years ago.

Dolphins have a streamlined bodies, making them perfect swimmers. Depending on the species, they are between 1.5 and four meters long. The largest dolphins, the killer whales, even reach a length of eight to nine meters. Dolphins have a triangular dorsal fin, the fin, two front fins, the flippers, and a typically shaped caudal fin, called the fluke. The dolphins’ jaws are formed into a beak-shaped, long snout.

They have around hump-like bulge on their heads: the melon. This is a special organ that allows the dolphins to orient themselves with the help of echo sounds. The blowhole through which the animals breathe is located on top of the head.

Depending on the species, dolphins are colored in different shades of gray. The upper side is usually darker than the ventral side. Dolphins have a relatively large brain, which is why they are considered among the most intelligent animals. Their sense of hearing and smell is very well developed. 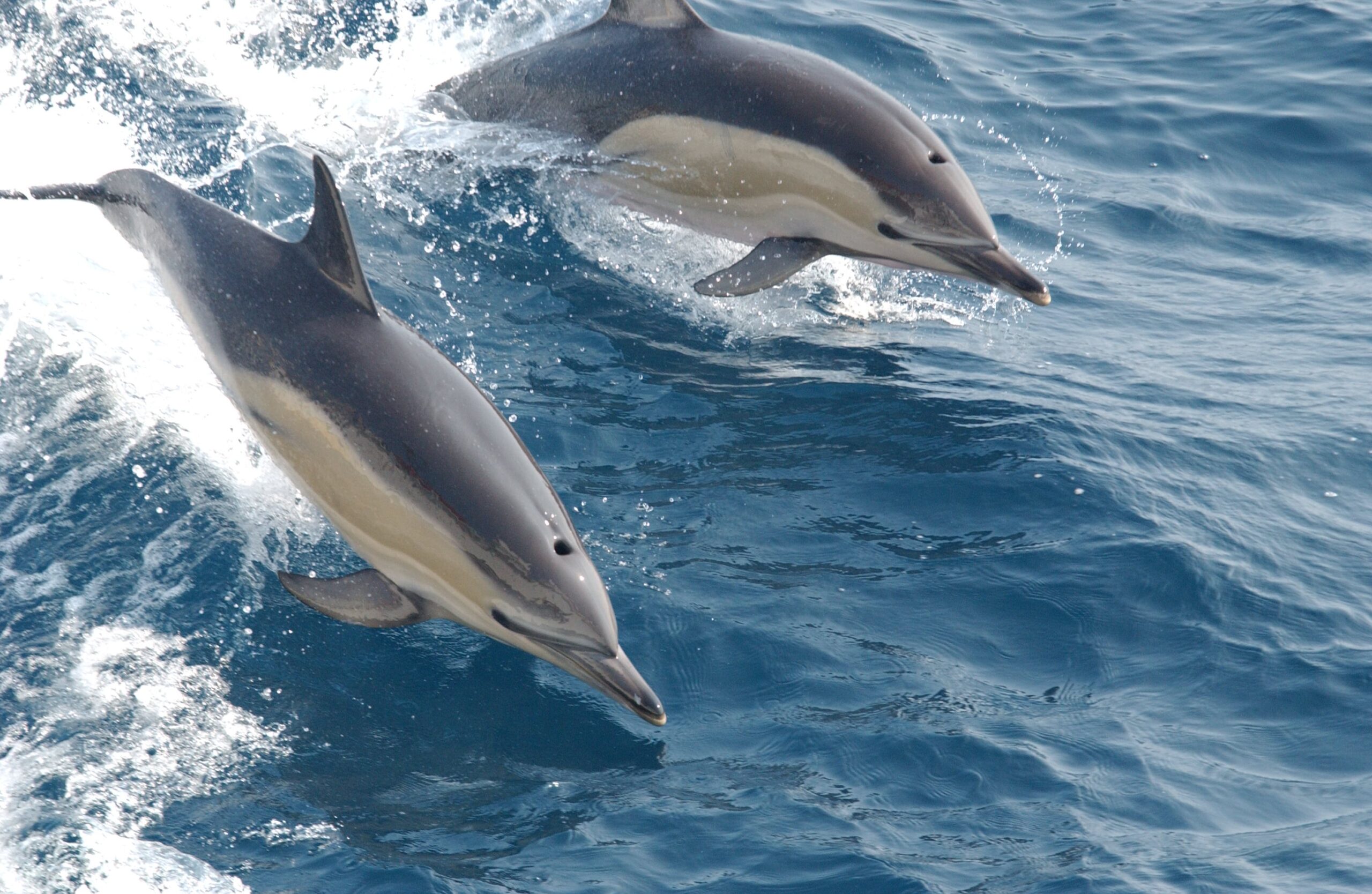 Bottlenose dolphins are one of the best-known species of dolphins. They are two to four meters long and weigh 150 to 200 kilograms. They are dark gray on the back, slightly lighter on the flanks, and almost white on the belly. Her seemingly “smiling” facial expression is typical. River dolphins form a superfamily of their own. They differ greatly from the real dolphins in some characteristics. For example, they can only see very poorly.

But they can orientate themselves even better with their echolocation system. In addition, the snout of all river dolphins is much longer than that of marine dolphins. The largest river dolphin is the Amazon river dolphin: it grows up to 3 meters long and weighs 160 kilograms.

Where do dolphins live?

Dolphins are found in almost every sea in the world. However, the individual species have very different distribution areas. Some live in large marine regions, others, such as the dusky dolphin, only on the coasts of South America and South Africa. The bottlenose dolphin is found worldwide in temperate and tropical seas, and also in inland seas such as the Mediterranean and Black Seas.

The river dolphins are an exception: they only live in rivers. Dolphins live both in coastal waters and on the high seas. River dolphins, on the other hand, inhabit muddy, murky river systems in tropical regions.

What types of dolphins are there?

A total of 26 species belong to the dolphin family. In addition to the bottlenose dolphin, other species are particularly well known: The common dolphin, the white-sided dolphin, the slender dolphin, the spinner dolphin, and the spotted dolphin. There are five species of river dolphins. They are mostly named after the rivers they live in:

How old do dolphins get?

The life expectancy of the different dolphin species varies. It is not known for many species. It is known that bottlenose dolphins can get quite old: the animals reach an age of around 37 years.

How do dolphins live?

Dolphins are very social animals. They live together in groups called schools. That can be 100 animals and more. However, the same animals do not always stay together. It happens that they also switch between different groups. Nevertheless, many dolphins have a close bond with their fellow dolphins. This is also reflected in the fact that they try to help sick and injured members of their own species.

Dolphins are also very good at diving: when hunting, they dive up to 300 meters deep and can stay underwater for 15 minutes. Some species can dive to depths of 600 meters. However, because they are mammals, they need to come to the surface of the water regularly to breathe. 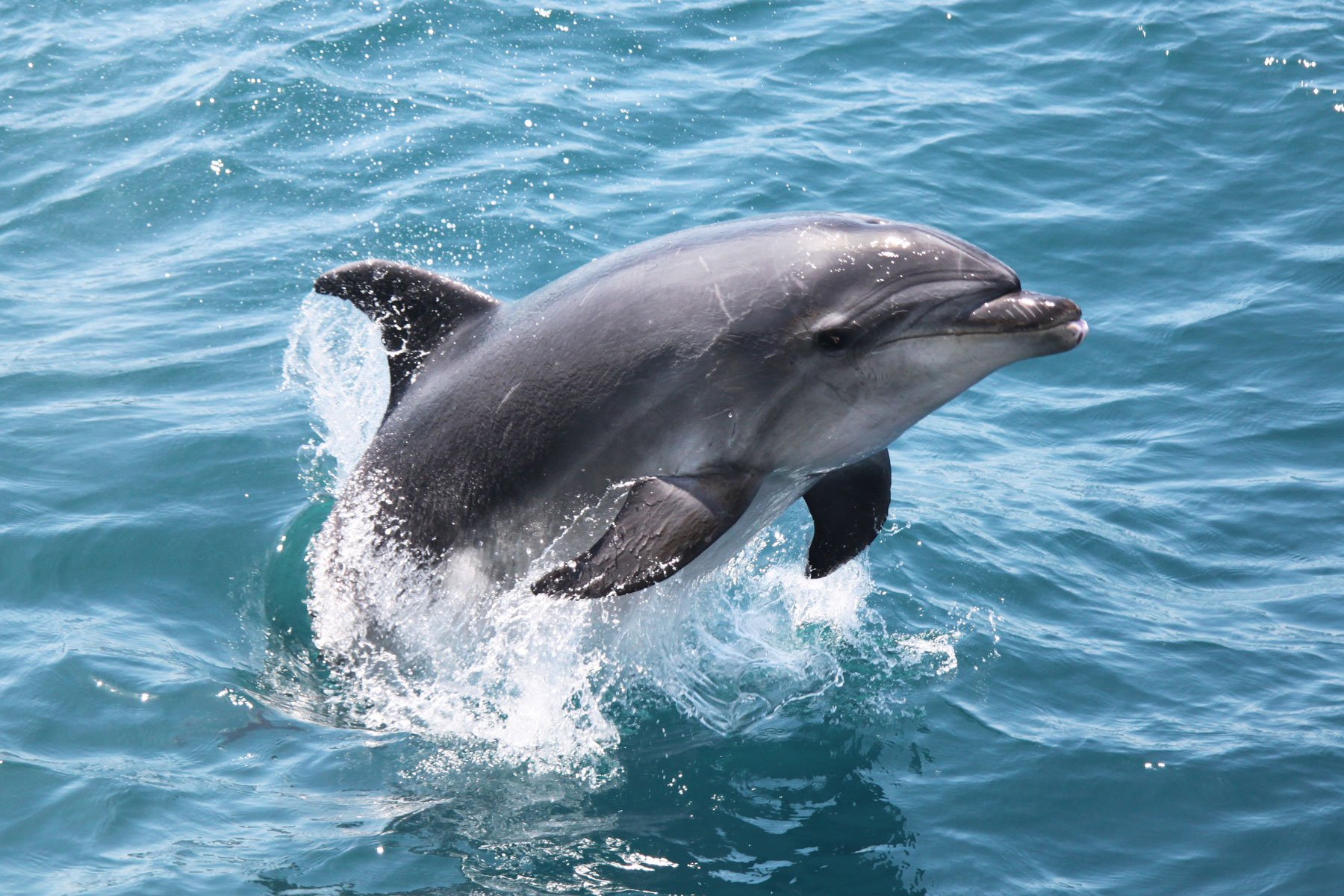 Relatively little is known about the life of river dolphins. This is partly because they are difficult to spot in the murky waters of their habitat. What is known, however, is that they hardly ever jump out of the water. In addition, they often swim lying on their side in the water. They scan the bottom of the river with their fins. Amazon river dolphins also commonly swim on their backs.

Friends and foes of dolphins

Dolphins can fall prey to the killer whale, one of their relatives. But animals of the same species can also become dangerous: if dolphins meet strangers who do not belong to their group and who they do not know, they drive them away or even attack them.

How do dolphins reproduce?

Dolphins only give birth to one young at a time. The gestation period varies greatly from species to species. Bottlenose dolphins, for example, mate from spring to fall. After a gestation period of 12 months, a young is born that is already 100 to 130 centimeters tall.

The young are nursed by the mother for 18 months. Although the animals become sexually mature at the age of five to twelve years, they only reproduce at the age of nine to 13 years. Female bottlenose dolphins only give birth to a young every two to three years.