Dogs are not picky about their food, so stomach problems, as a result, are not uncommon. Aside from poor nutrition, your dog may have other causes.

Every owner knows that a dog is vomiting. Since this happens sporadically, this is usually not a cause for concern. However, vomiting is a symptom that can indicate many diseases, both mild and severe.

By far the most common cause of vomiting in an animal is its feeding behavior. For many, it doesn’t matter what is in front of them: used handkerchiefs, vomiting of another dog – they eat everything. It can quickly happen that something is wrong with your stomach. Even if they eat too quickly or gnaw on grass, the contents of the dog’s stomach are quickly released again.

If your dog vomits only once but otherwise appears awake, this is an indication of improper or too fast feeding. To help his stomach recover, you can allow him to fast for up to six hours and then slowly feed him back on easily digestible food.

However, if your dog vomits more than one or two times, it is best to take him to the vet.

Other common causes of vomiting in dogs include:

To prevent your dog from eating indigestible or poisonous food or items, you should always remove these items. For example, some dogs swallow nearby socks that they cannot digest, which then have to be removed in an expensive surgery.

In addition, certain foods such as chocolate and plants such as poinsettia can be toxic to dogs. If you suspect poisoning in your dog, you should contact your veterinarian immediately.

Illness as a Cause of Vomiting 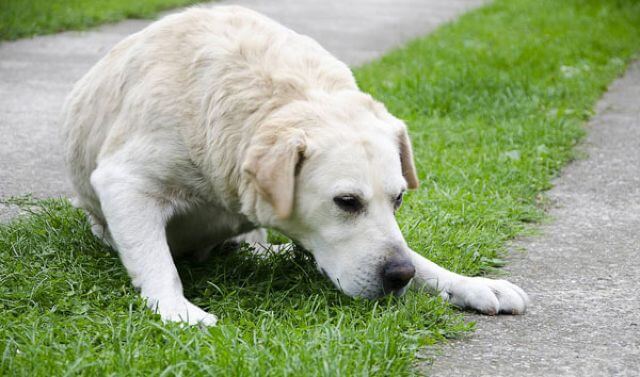 In addition to what your dog eats, the disease can also make him nauseous. For example, from inflammation of the pancreas. At first, it manifests itself in vomiting and loss of appetite. Fortunately, many dogs recover quickly with veterinary treatment. The situation is similar to other inflammations of the gastrointestinal tract, which can also be manifested by diarrhea, vomiting, and loss of appetite. If your dog has other symptoms in addition to vomiting, you should definitely show it to your veterinarian.

An extremely dangerous cause of vomiting in dogs is bloating, for example, from eating fermented food. The stomach expands greatly due to the formation of gas – in the worst case, this leads to a dislocation of the stomach. If your dog is not treated in time for bloating, it can quickly be fatal. A typical sign of bloating is if the dog vomits all the time, but it is almost not suppressed.