Crocodile Tejus lead a very hidden life: They inhabit the waters of swampy areas that no human can enter. They only come ashore at night.

Crocodile tejus belong to the family of the rail lizards and thus to the reptiles. The German name of ‘Speisenzechsen’ comes from the regularly arranged shields or rails that the animals wear on their stomachs. Rail lizards are found only in North, Central, and South America and correspond to the lizards we know from the Old World.

They also look a bit like giant lizards. Depending on the species, the tail of the rail lizard is round like that of lizards or flattened at the side like that of species that live in water. Rail lizards are not only more diverse than our lizards, but they also sometimes grow much larger than these: a crocodile teju, for example, grows to be 120 to 140 centimeters long.

The animals are colored olive to dark brown. Males have orange heads, females green. Their body is very strong and the long tail is flattened at the sides because it is used for rowing in the water. Two rows of thick scales run along the tail, forming what is known as a scale crest.

Where do crocodile tejus live? 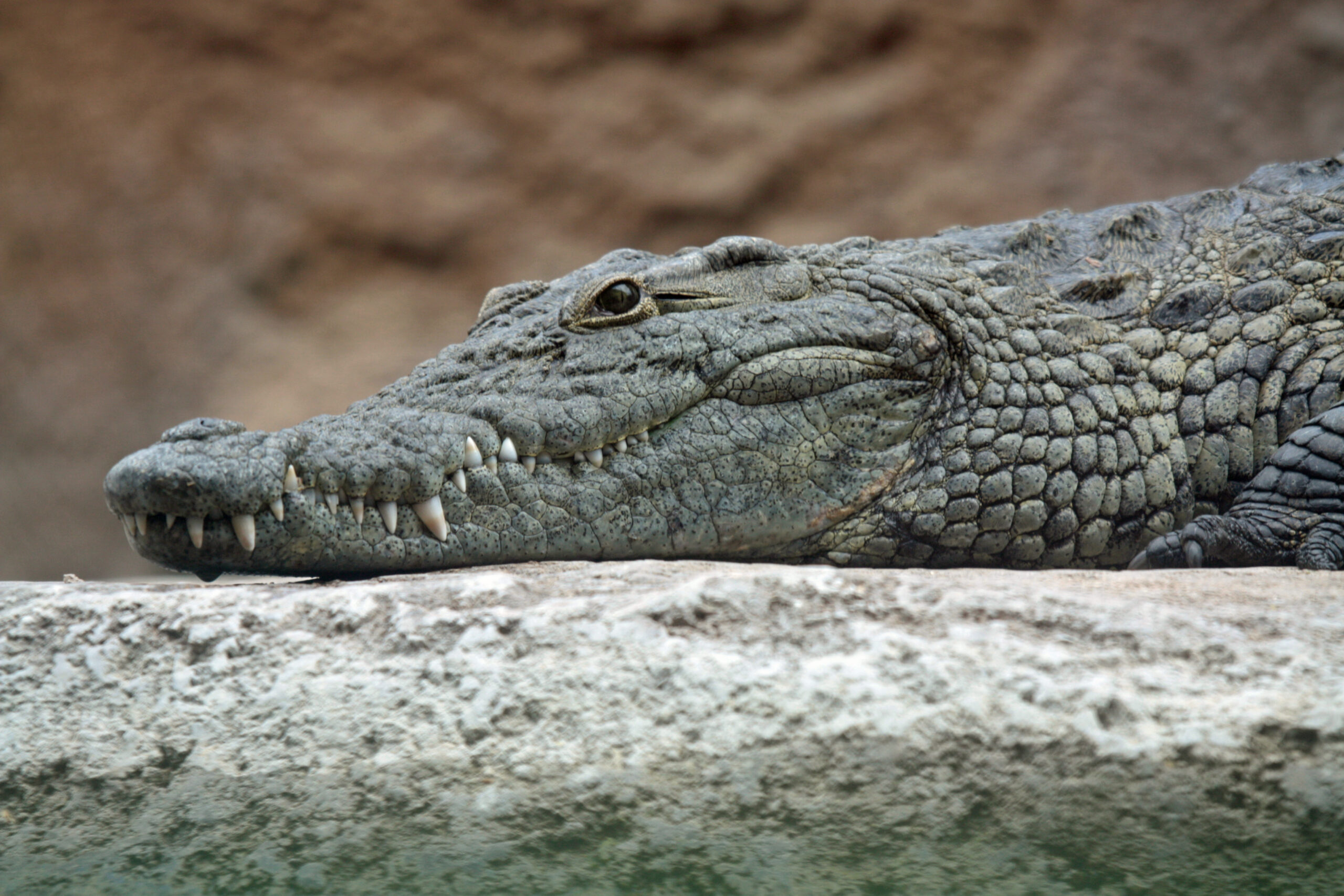 Related species of the crocodile tejus occur from the USA to Argentina and Chile. The Crocodile Teju itself lives in northern South America in Colombia, Peru, Ecuador, French Guiana, Suriname, and Brazil. Crocodile Tejus live exclusively in the flood forests of South America – in the so-called Igapo forests.

These are swamp forests of medium-sized trees, shrubs, and reeds that are crisscrossed by water channels and tributaries. This landscape is mainly found at the estuaries of the Amazon. The ground is flooded at least half the year. Grass and herbaceous plants only grow there during the dry season.

Which species are crocodile tejus related to?

Even for scientists, it is difficult to distinguish rail lizards from lizards if they do not know which continent and region an animal came from. Altogether, the family of the rail lizards includes 45 different genera with around 200 species.

Some species live on the ground, others in the water, and still others in trees. The Chilean teju, which lives in arid regions, is known, as the rat lizard in the USA, the Ameiven in Central and South America, various large tejus such as the banded tegu from South America and the monitor lizard, which occurs in the deserts of Peru

How old do crocodile tejus get?

It is not known what age crocodile tejus can reach.

How do crocodile tejus live?

Not much is known about the life of the crocodile tejus in the wild. The animals live in inaccessible swamp forests whose soil does not support humans. During the day, crocodile tejus mostly stay in the water. Only at night do they wander into hiding spots on dry patches of land.

Crocodile tejus are excellently adapted to life in the water: They are excellent swimmers and divers. Their laterally flattened tail, which they use as an oar, helps them with this. When they dive, the air they exhale rises from their nostrils to the surface with a gurgling noise. When kept in captivity, the animals are very peaceful.

Friends and foes of the Crocodile Tejus

Hardly anything is known about the enemies of the Crocodile Tejus. Young, newly hatched crocodile tejus are presumably the victims of other lizards, snakes, and birds of prey.

How do crocodile tejus reproduce?

Like most reptiles, crocodile Jesus lays eggs. After mating, the females supposedly lay their eggs, about three inches long, in the abandoned nests of tree termites. 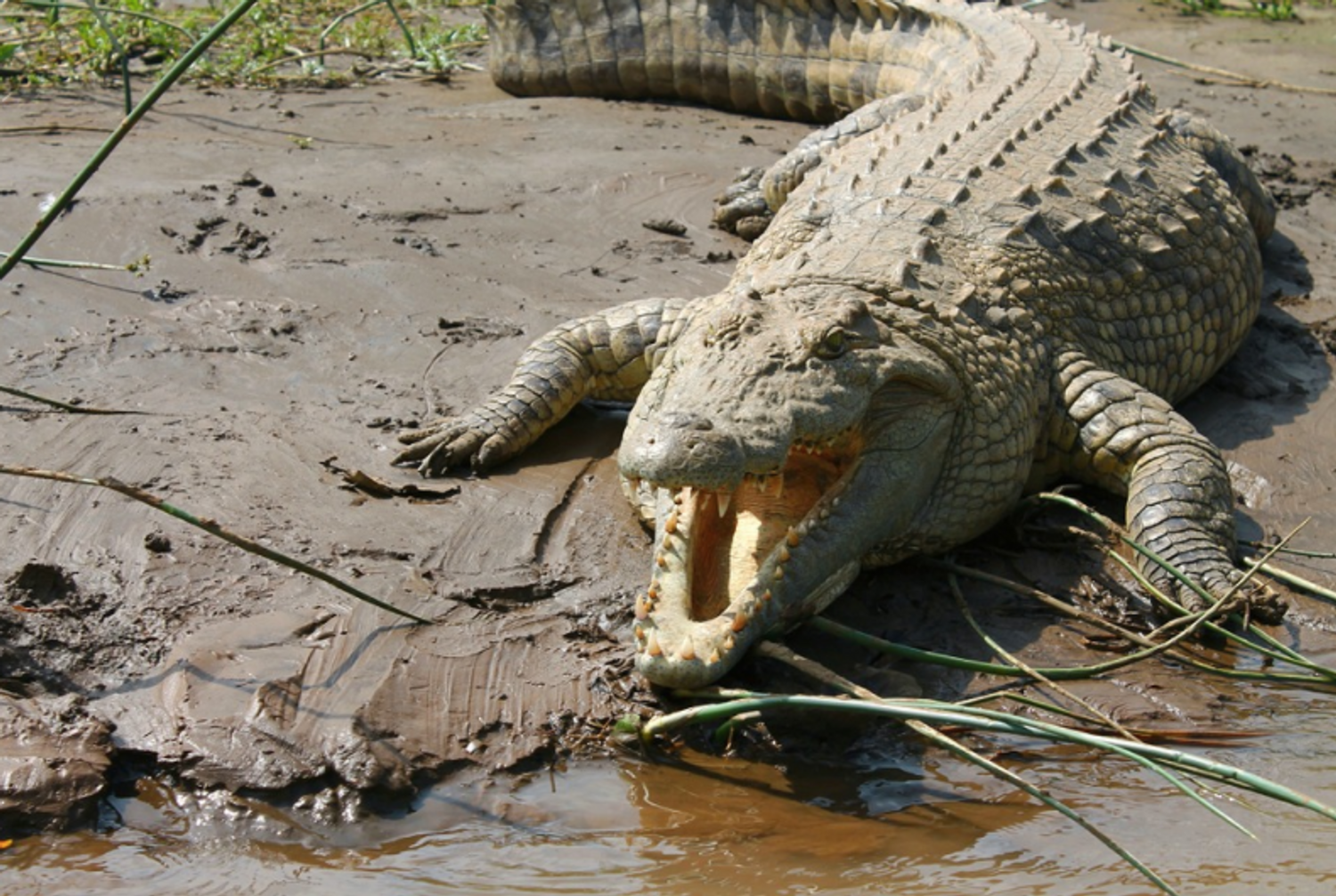 What do crocodile tejus eat?

Crocodile Tejus feed almost exclusively on swamp snails. The animals grab them with their jaws, then they open their mouths and raise their heads. As a result, the snail slides backward and is crushed by the so-called plaster teeth. The soft parts of the snail swallow the crocodile tejus. The shell pieces are spat out.

Other species of rail lizards eat plants, insects, snails, fish, other small lizards, and snakes, as well as birds, eggs, and small mammals.

Crocodile tejus are not suitable for keeping indoors. They are rare, very expensive, and because they grow quite large, they also take up a lot of space. Because they come from the tropics, they also need an enclosure that is warm – ideally 30 to 35°C. The ground may be even warmer in some places. Even in zoos, there are only a few crocodile tejus.