Adders get their name from the distinct, dark zigzag band down their backs.

The adder belongs to the vipers. The snakes of this family are all venomous, and their bodies are quite thick in relation to their length. The adder is still one of the slimmest of them. It is usually only 60 centimeters long, sometimes up to 80 centimeters. The head is elongated and triangular and is clearly separated from the body. The snout is short and rounded.

A typical feature of the vipers, by which they can be recognized at first glance, are their eyes: During the day, the pupils form a vertical slit. In contrast, the pupils of the non-venomous grass snakes that also live with us are round. Adders can be colored very differently. The males are mostly gray to grey-brown, the females yellowish to dark brown.

The dark or almost black zigzag band on the back is typical. They have dark spots on the sides of their bodies. Individual animals are even completely black or reddish in color. In such adders, the zigzag band is hardly recognizable. The belly is usually grey, grey-brown, or black in color and has light spots. Adders have two fangs that they use to inject poison into their prey from their venom glands. For humans, however, the bite of an adder is almost never fatal. Adder venom can only be life-threatening when humans are very weak or ill.

Most people have no complaints after the bite of an adder. Nevertheless, you should always consult a doctor. Adders are good crawlers and swimmers. They can only see badly, but they perceive the slightest vibration of the ground. You can often see adders flicking their tongues. The reason for this is as follows: On the tip of the tongue – as with all snakes – there are sensory cells with which the animals can smell excellently. 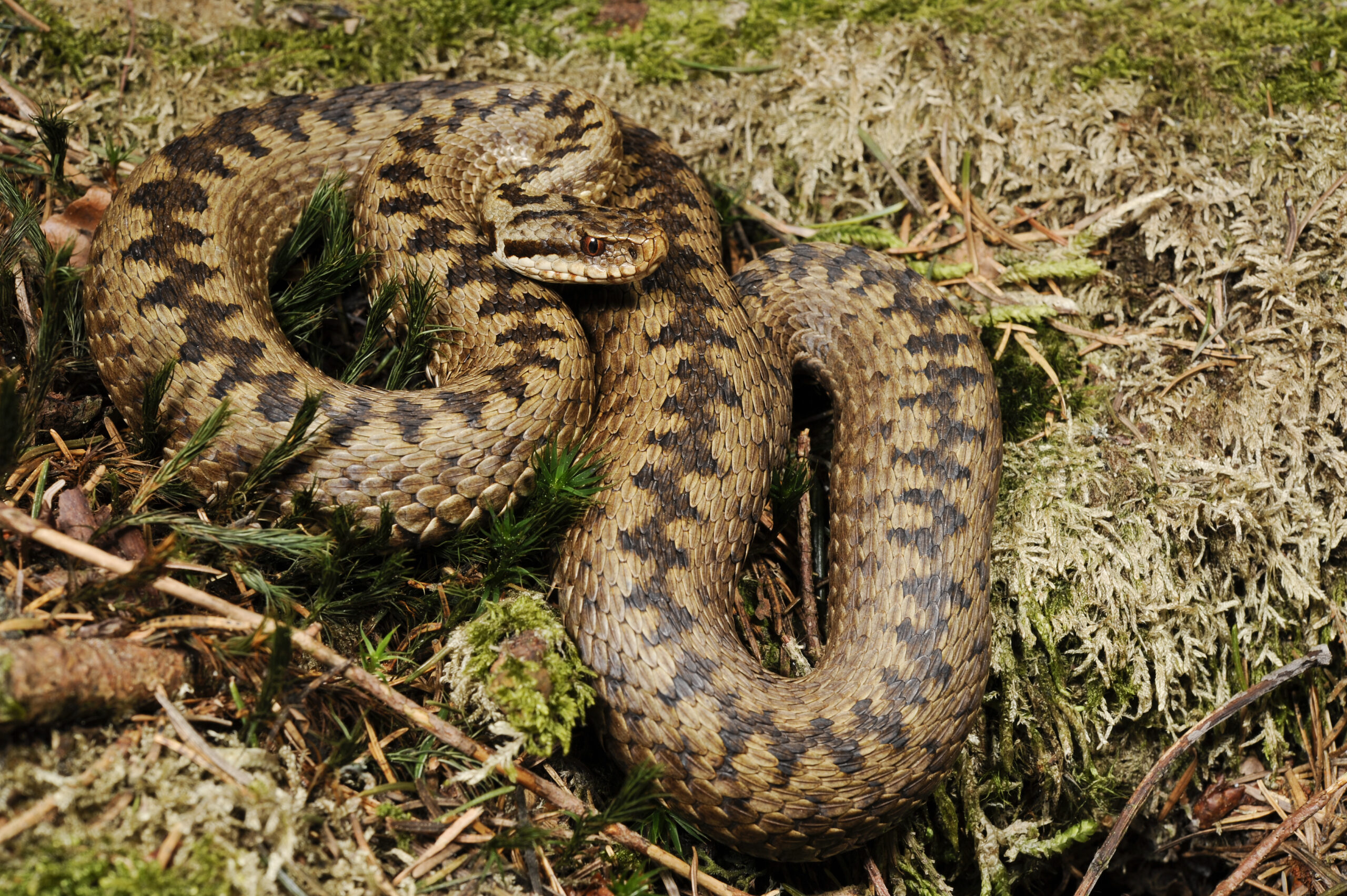 Where do adders live?

The adder is one of the most widespread snakes in Europe: it lives from France and Great Britain through Siberia and Mongolia to the Pacific coast of Asia. In the north, it occurs even above the Arctic Circle in Lapland, and in the south, it lives up to and including northern Greece and Bulgaria. Adders feel comfortable in many different habitats: They live in moors, on damp meadows with many bushes, on heathland, at the edges of forests, and in forest clearings.

It is important that these places are exposed to the sun for at least a few hours a day. Adders like it when their habitat stays the same over many years and nothing changes. That’s why they almost never live in gardens, fields, or parks.

What species of adder are there?

How old do adders get?

Adders can live up to 15 years.

How do adders live?

Adders always prefer to be in the same place. They also have hibernation sites that they revisit frequently and where they hibernate along with other adders from October to March. Such hibernation places are mostly abandoned burrows of small mammals such as weasels. When the spring sun shines again, the males are the first to emerge from their burrows. The females follow one to three weeks later.

Because, like all snakes, they are reptiles and are cold-blooded, they lie in the sun for many hours every day in the first few weeks after winter to warm up their bodies. In the weeks after the hibernation, they do not eat anything. Between the end of April and the end of May is the mating season for adders. The animals prefer to choose warm, sunny days. 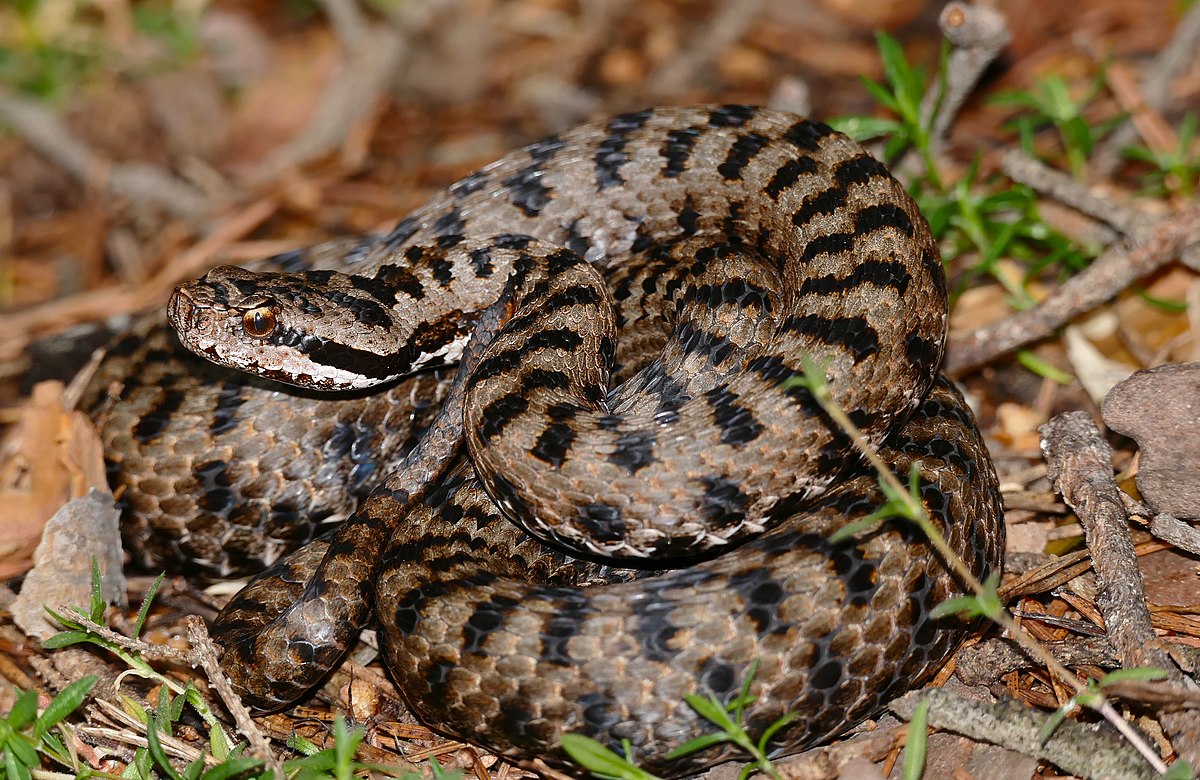 About three to four weeks later, they migrate to their summer ranges, where they hunt until the following winter. When it gets colder again in autumn, they migrate back to their wintering grounds. Adders are active during the day and at dusk, in summer also at night. They usually come out of their hiding places at sunrise and disappear again in the late morning.

They often seek shelter in piles of stones or mouse holes. In the afternoon they crawl to their sunning places and sunbathe extensively. They feel most comfortable when it is 30 to 33° Celsius in the sun. Then the snakes are mobile and can react at lightning speed.

Adders are not really dangerous. They are very shy animals. Because they can perceive vibrations very well, they have long fled when people come near. They only attack and bite when they feel threatened.

Friends and foes of the adder

Polecats and hedgehogs in particular hunt adders. Sometimes foxes, badgers, or martens also hunt these snakes. However, eagles and storks are more dangerous to them. Young adders are even eaten by jackdaws or magpies. And of course, man is an enemy of the adder. In ancient times, people were very afraid of snakes and killed them mercilessly.