Hardly any reptile can change its shape like the frilled lizard: if it raises the collar around its neck, it looks like a small primeval dragon.

Frilled lizards are reptiles and are the most famous members of the Agama family. The females are about 60 centimeters, the males 80 to 90 centimeters, sometimes up to 100 centimeters long. However, the body is only 25 centimeters, the rest of the body size contributes to the long, thin tail. The unmistakable feature of the frilled lizard is a large, wrinkled flap of skin on the side and under the neck. Usually, it is fitted close to the body.

In case of danger, however, the lizard raises this flap of skin with the help of cartilaginous processes of the hyoid bone, so that it stands like a collar around the neck. This collar can be up to 30 centimeters in diameter. The body of the frilled lizard is slender and flat on the sides. The skin is covered with scales and colored yellow-brown to black.

Unlike many other lizards, frilled lizards do not have a dorsal crest. The legs are unusually long, the feet large, and they can run upright on their hind legs.

Where do frilled lizards live?

Frilled lizards are native to northern and north-western Australia and New Guinea. Frilled lizards live mainly in light tropical tree steppes and dry forests on trees. They even climb on these up to the highest branches.

What species are frilled lizards related to?

The frilled lizard is the only species in its genus. The closest relatives are numerous agamas such as uromastyx. 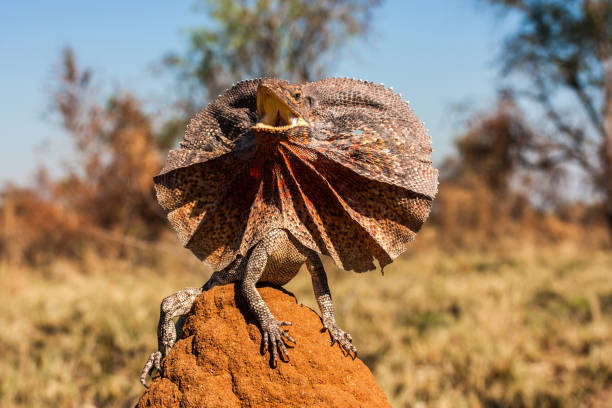 How old do frilled lizards get?

Frillnecked lizards are about eight to twelve years old.

How do frilled lizards live?

Frilled lizards are active during the day. Most of the time they sit still on a branch or tree trunk to sunbathe and stalk for food. Thanks to their yellow-brown-black coloration, they are then almost impossible to spot and look like an old branch. If they move on the ground, they usually only run on their hind legs – it looks quite strange and unusual.

The most striking thing about a frilled lizard, however, is its skin collar: In the event of danger or during the mating season, the lizards open the collar, which normally lies close to the body, in a flash. He then stands around his head.

The skin of the collar is covered with scales and is richly mottled with black, white, brown, bright red, and yellow. When the collar is open, the frilled lizards look huge. At the same time, they open their mouths wide and potential attackers look into the yellow throat with the menacing teeth. The frilled lizards also flap their tails, make hissing noises, stand up on their hind legs and rock their bodies back and forth.

However, the collar is not only used to scare off enemies or to impress other collared lizards during the mating season: the lizard can regulate its body temperature via the large surface of its skin. If the animal gets too hot, it raises its collar and thus gives off heat over the large surface of the skin. Frilled lizards are loners. Only during the mating season do males and females meet for a short time.

Friends and foes of the frilled lizards

Enemies of the frilled lizards are boa constrictors, birds of prey, and dingoes. However, they are often deterred when the lizards raise their collars and their predators suddenly think they are facing a much larger opponent. Therefore, mostly only young, freshly hatched frilled lizards fall victim to them.

How do frilled lizards reproduce?

Frilled lizards become sexually mature at one to one and a half years. Mating season for the frilled lizards is between December and April. A complicated ritual takes place before mating: the male impresses the female with a violent nod of the head. When it is ready to mate, it responds with circular movements of its front legs. When mating, the male holds the female by biting her neck firmly.

Four to six weeks after mating, the females usually lay two clutches of eight to 14, sometimes up to 20 eggs. The eggs are buried in a hollow in the warm, moist soil. The young hatch after 70 to 80 days. You are immediately independent.

How do frilled lizards communicate? 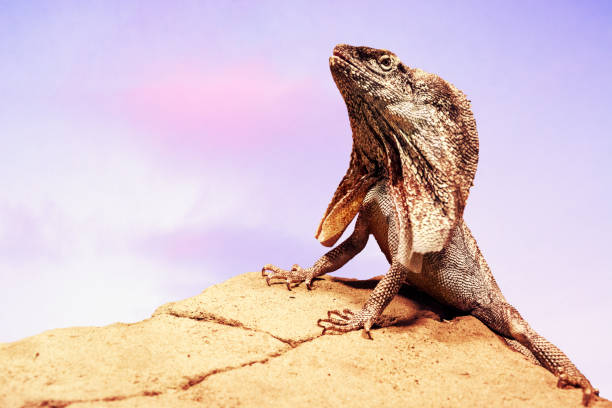 What do frilled lizards eat?

Frilled lizards mainly eat smaller lizards, bird eggs, spiders, and insects such as grasshoppers. Frilled lizards kept in terrariums get large insects and mice and sometimes some fruit. However, they are only fed every two to three days so that they do not become too fat.

Frilled lizards are rarely kept in terrariums. On the one hand, they are strictly protected in their homeland of Australia and there are only a few, very expensive offspring from offspring. On the other hand, they need a lot of space and are not easy pets: you need a lot of knowledge and experience to be able to keep them in a species-appropriate manner.

Frilled lizards need a very spacious terrarium with lots of hiding places and branches to climb on. It also has to be warm: during the day the temperature has to be between 27 and 30 degrees, at night between 20 and 24 degrees. In sunbathing areas warmed by lamps, the temperature can even reach 36 degrees.