The corn snake is probably the most common snake kept in terrariums. The reasons for this are that they are conspicuous and beautifully colored, relatively easy to keep, non-toxic, harmless, and very peaceful. In schools, too, this reptile is often used as an example for strangler and climbing snakes. Numerous working groups take care of these cold-blooded North Americans in the education sector.

The name “Kornnatter” comes from the English word “corn”, in German “Mais”. There are two explanations for this, both of which seem sensible and plausible. On the one hand, corn snakes are considered to be a cultural followers and are often found in the vicinity of agricultural properties and the adjacent fields; on the other hand, the snakes are often brightly colored, like the “Indian maize”.

In this article, you will be informed about a few biological basics and you will find some important information about keeping and care. 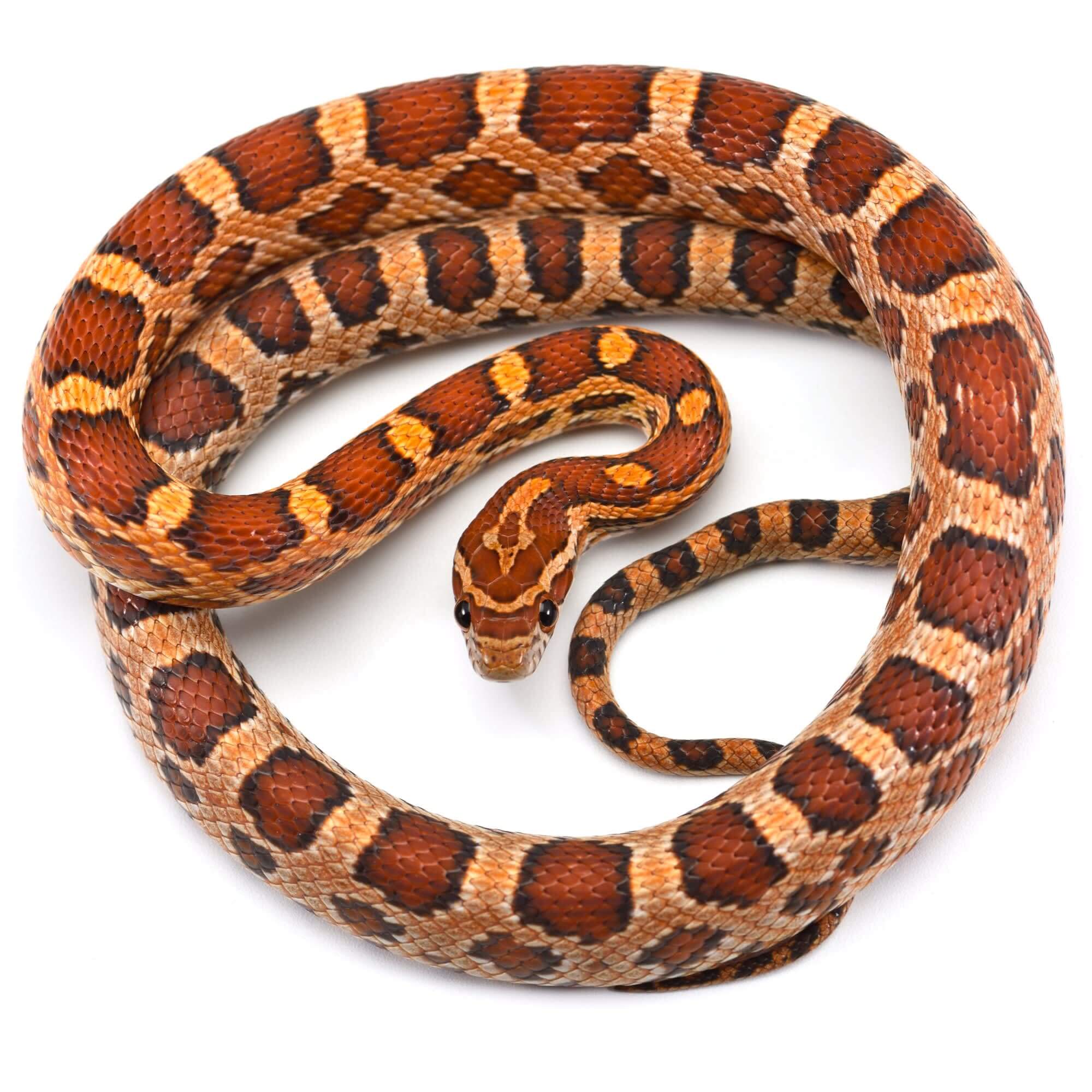 The corn snake (Pantherophis guttatus) is a non-poisonous strangler snake. It belongs to vipers, with the biological technical term Colubridae. It is native to North America. The average body length is 120 to 150 cm. Thus it is one of the medium-sized taxa. Because the natural distribution of the corn snake extends over much of the eastern United States, the species is very diverse in appearance. The body structure of the corn snake can be described as slim. The head is only slightly separated from the rest of the body. Like other snakes, the corn snake has large, round pupils. This is enclosed by a brown iris ring. The belly scales are clearly bent upwards on their lateral edges, so that safe climbing is possible.

The distribution area of ​​the corn snake extends along the east coast of the United States. It stretches from the Florida Keys in the south to the state of New York in the north. In the west, the distribution area extends into the states of Mississippi, Tennessee, and Louisiana. The corn snake inhabits a wide variety of habitats within these areas, some of which differ significantly in terms of climate. The habitats are just above sea level up to higher altitudes of over 750 m. The corn snake is not picky about its habitat requirements and populates deciduous and coniferous forests that are wet in summer, as well as bush and grassland areas and wetlands. It is considered a cultural follower and is often found in the vicinity of human settlements.

Corn snakes are most active at night or at dusk, where they can hunt undisturbed without landing too easily as prey themselves. In some cases, however, you can also observe them during the day in exposed places while sunbathing. When the corn snake is not out looking for food or for reproduction purposes, it spends a lot of time in hiding places, hidden under leaf litter, bark mulch, rocks as well as in hollow tree trunks and caves. Corn snakes not only look for food on the ground but also in trees, where they prey on birds or plunder their nests. As a skilled climber, this does not present any major difficulties. In the water, on the other hand, you will rarely find corn snakes, although they are also good swimmers.

A large number of corn snakes go into hibernation during the cold season. You can sometimes observe several dozen specimens that come to suitable places to hibernate together. This resting phase lasts up to four months. During this time the reptiles do not eat any food.

Corn snakes are carnivorous strangler snakes that, as opportunists, have a wide range of food. These include small mammals (mice, rats), reptiles, amphibians, and birds. In addition to the vertebrates, bird eggs are also eaten.

When a corn snake has fixed a prey with its mouth, it wraps its very muscular body around the prey several times, increasing the pressure on the internal organs of its victim until death occurs. The captured living being is devoured as a whole.

This species of snake is non-poisonous and has no protection status, i. That is, it may be held without the approval of the authority. Numerous offspring can easily be obtained from selected pet shops and specialists.

Corn snakes are kept in a permanently closed terrarium made of wood or glass, which has sufficient air circulation to prevent the formation of mold and the spread of moisture-loving pathogens.

A popular formula for calculating the minimum size of the terrarium is as follows:

In order to do justice to the natural way of life of the snake, you should pay attention to several hiding places (both in the warm area and in the cooler area of ​​the terrarium). Since corn snakes like to climb, the terrarium should be equipped with many climbing options. Make sure that there is sufficient stability, otherwise the climbing snakes may injure themselves. The terrarium must definitely have a small to medium-sized water container, as corn snakes prefer to drink from larger pools of water (especially after devouring prey). If you find the corn snake in the water basin, this can mean that you are keeping the animals too dry and trying to absorb the moisture they need. Corn snakes usually don’t like going into the water that much.

A factor that should not be underestimated for the well-being of these reptiles is temperature.

During the day this should be 24-27 ° C. At night, temperatures should drop by around 5 ° C. The minimum value for night temperatures, outside of winter rest, is at least 18 ° C.

There must be at least one hiding place in the terrarium that is not heated so much.

As a rule, heaters are sufficient to achieve the desired temperature. Floor heating is only required if the terrarium is otherwise too cool. The lighting can also simulate a day-night rhythm including seasonal fluctuations, which gives the keeping a more natural look and is well accepted by the animals.

The humidity is also an important success factor in keeping. Corn snakes prefer a dry position. It is sufficient to spray the terrarium moderately with lukewarm water 2-3 times a week. Under no circumstances should you spray the animals directly!

You should also keep the substrate dry. A permanently moist soil favors the development of skin problems, such as. B. Fungal diseases. Suitable terrarium substrates are, for example, fine-grained bark litter (grain size 8 – 12 mm), bark mulch, and terrarium soil pressed into blocks.

There are a few things to keep in mind when feeding: Corn snakes eat live prey, but also frozen prey, which logically needs to be thawed. As terrarium animals, corn snakes eat mice or small rats, depending on the size of the snake. 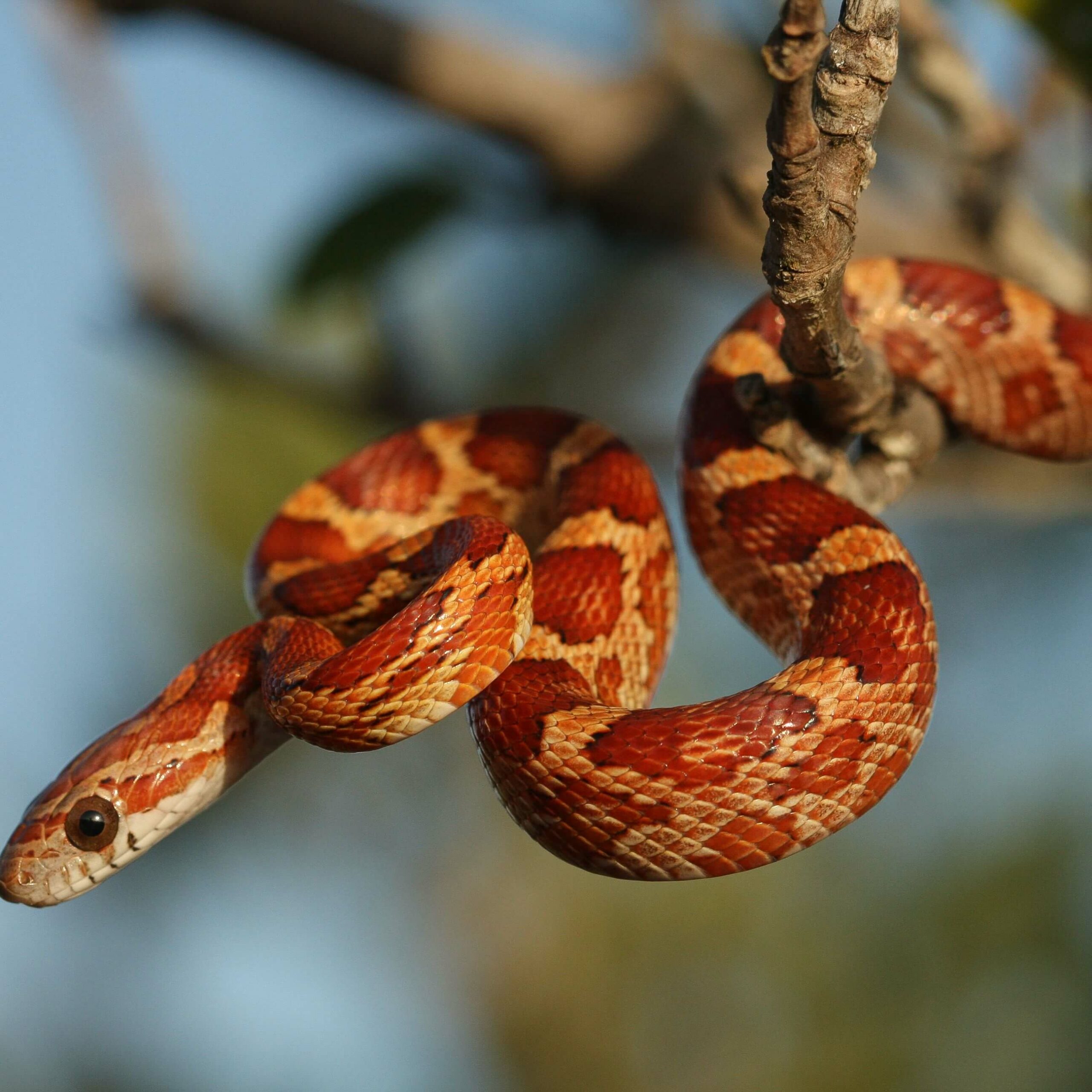 Corn snakes are justifiably popular snakes. They’re beautiful to look at, exciting to watch, relatively easy to hold and don’t get too big. Before you buy, however, you should study the specialist literature very intensively, because corn snakes are highly developed animals, some of which can live to be over 20 years old. You should definitely take this into account when considering a purchase.