Trachemys scripta elegans is an adaptable turtle species from North America that prefers warm habitats and can be kept in a suitable pond as well as in an appropriately sized aquaterrarium. It is also known as the red-eared slider turtle. This common name refers not only to the characteristic orange to red stripes behind their eyes but also to the beautiful pattern that covers their body and armor. Their English name (Red-eared Slider) also indicates that it is their habit to slide into the water from stones. With proper care, a red-eared slider can live up to 30 years. This fact should always be taken into account before purchasing. How it can be that a turtle species are endangered on the one hand and one of the most frequently kept reptiles, on the other hand, you will find out below.

Contents show
1 To Taxonomy
2 To Biology
3 About the Appearance
4 For Nutrition
5 For Keeping and Care
6 The Jeweled Turtle as a Popular Accessory? 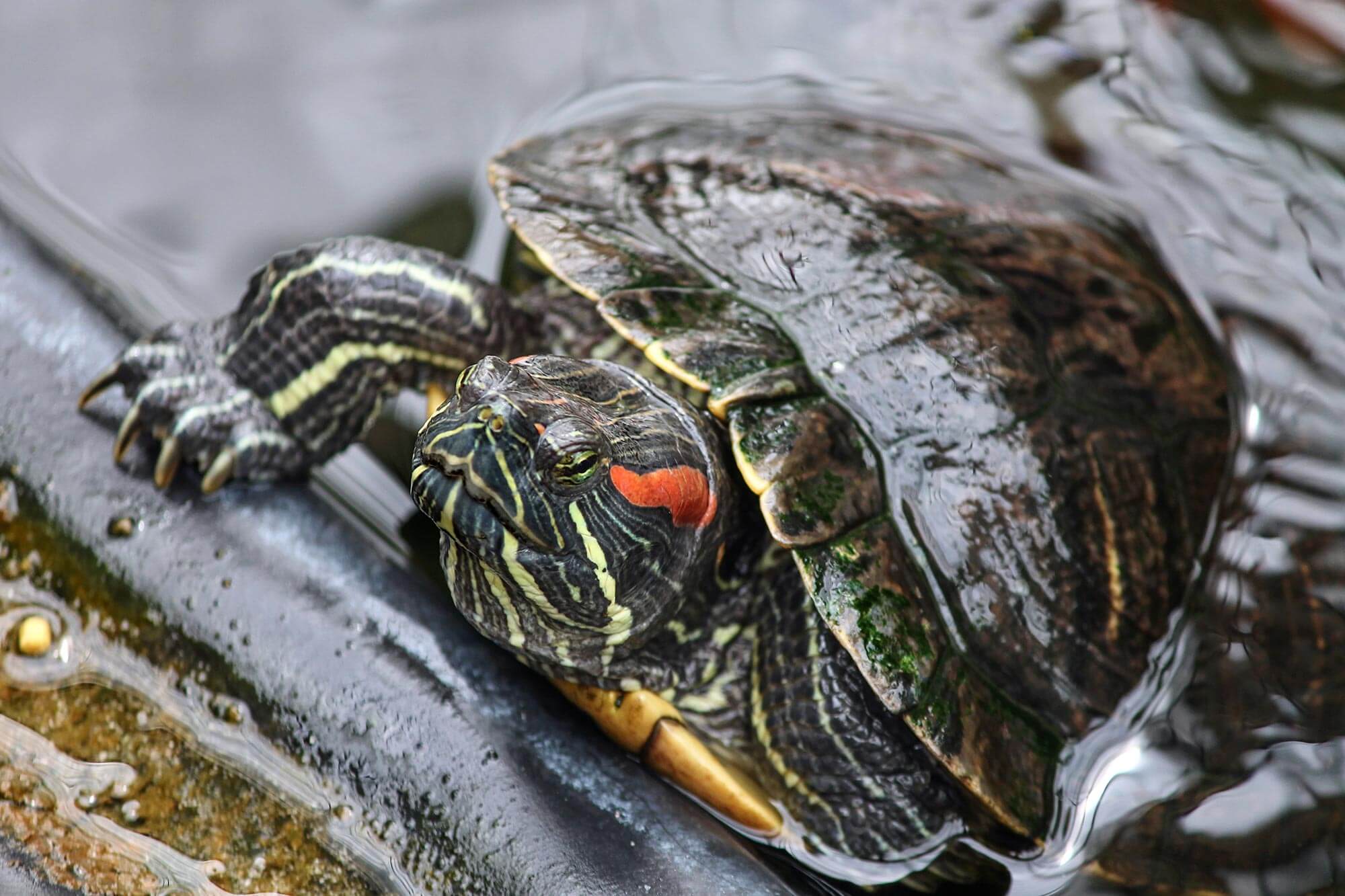 The red-eared slider turtle belongs to the class of reptiles (Reptilia), to be more precise to the order of turtles (Testudinata). It is a New World pond turtle, so it belongs to the Emydidae family. Like the yellow-cheeked ear turtle, it is also a letter ear turtle (Trachemys). The red-eared slider turtle, whose scientific species name is Trachemys scripta elegans, is a subspecies of the North American letter slider tortoise (Trachemys scripta).

As an adult, Trachemys scripta elegans reaches a carapace length of up to 25 cm, with females being slightly larger than males. With regard to this species, animals with an age of at least 37 years are reported in the literature; the actual life expectancy maybe even higher. The natural range is in the southern USA, especially in regions around the Mississippi as well as Illinois, Alabama, Texas, Georgia, and Indiana. As a habitat, the red-eared slider turtle prefers calm, warm, herbaceous waters with lush vegetation and sunny areas. The reptile is diurnal, very lively, and prefers to stay in the water (to search for food and to protect against predators). It also leaves the water to lay eggs.
If the temperatures drop below 10 ° C, the red-eared slider turtle goes into hibernation and moves into sheltered areas.

The species population is declining. Trachemys scripta elegans is a protected species because the natural habitat is increasingly threatened.

Red-eared ear turtles are distinguished from tortoises by a flattened shell. The feet are webbed. A particularly prominent distinguishing feature is the reddish stripe on each side of the head. Otherwise, there are cream-colored to silvery markings in the head area. The red-eared sliver can easily be confused with the yellow-cheeked slider (Trachemys scripta scripta). But as the name suggests, the two subspecies can be distinguished on their cheeks.

Like most pond turtles, the red-eared ear turtle is omnivorous, meaning that its diet includes both vegetable and animal foods. Older animals are consuming more and more plants. Mainly insects, insect larvae, snails, mussels, and crustaceans are consumed, in some cases also smaller fish. Trachemys scripta elegans is not a food lover, the eating behavior can be described as opportunistic.

For Keeping and Care

Keeping and caring for pond turtles is generally a relatively laborious hobby, as frequent water changes and water filtration are regular, standard duties. The supply of food is rather less of a problem, as the animals consume suitable commercially available or self-prepared recipe food (“turtle pudding”). A summer stay outdoors is recommended, as the natural daily routine and temperature fluctuations have a positive influence on the health of the animals.
Basically, the sexes should be kept separate in the ringed turtle. Frequent hitting of the males leads to immense stress for the females. Several females can usually be kept next to each other without any problems, but the behavior must be observed carefully: You should separate animals that are too dominant! When keeping and caring for them, you should take into account that red-eared ear turtles are agile swimmers and require a lot of space. A water depth of at least 40 cm for adult animals is recommended. A permanently installed place in the sun (e.g. a root protruding from the water) is essential to promote thermoregulation. Powerful heaters ensure a selective daytime temperature of 40 ° C and more. This is particularly beneficial to ensure that the reptile skin dries off quickly. Metal halide lamps (HQI lamps) and high-pressure mercury vapor lamps (HQL) are suitable for this. In addition to the warmth, they ensure an optimal abundance of light. Trachemys scripta elegans needs a piece of land with a base area of ​​0.5 mx 0.5 m and at least as deep as the length of the carapace. In the summer half-year, the water temperature should be around 25-28 ° C, the outside temperature should be around 2 ° C higher. Wintering is a somewhat more special matter and depends on the exact origin of the animals. However, this is partly not known. In this respect, I refer to the relevant specialist literature at this point. Only this much can be said at this point: The winter dormancy should last about two to four months, the winter temperature should be between 4 ° C and 10 ° C. Wintering outdoors is not recommended.

In principle, there are minimum legal requirements for keeping and care:

The Jeweled Turtle as a Popular Accessory? 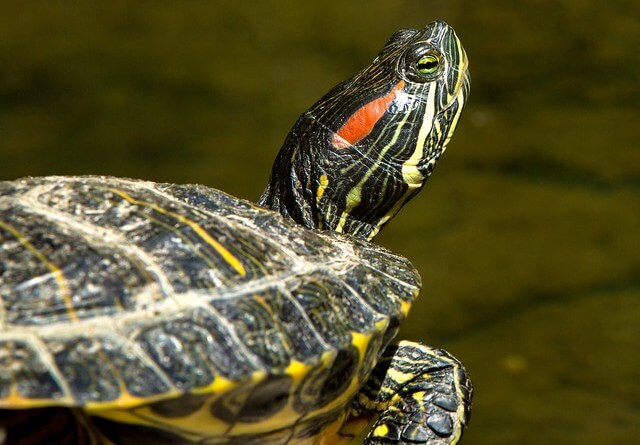 In the 50s and 60s of the last century, real turtle farms developed in the USA after it was discovered how cute the “baby turtles” look and how much money can be made with these reptiles. Children in particular were among the preferred consumer group. Since keeping and caring for them is actually not for children, since this is very demanding and since the young turtles do not stay so small all their lives, the animals have been abandoned many times without paying much attention to whether the habitats are actually suitable. In this country, too, it often happens that animals are released into the wild and exert considerable pressure on the predominant flora and fauna. In particular, the European pond turtle native to us suffers considerably from the pressure of competition with its much more aggressive American relatives. Nevertheless, the red-eared slider turtle is one of the most popular turtle species and is relatively easy to keep. It is a pity that in the natural habitat the habitats have been and are being destroyed many times so that the populations have to suffer considerably!