Search
Contents show
1 Can I Keep Guinea Pigs and Rabbits Together?
2 Reasons Against the Common Stance
3 Lonely Together: the Animals Don’t Understand Each Other
4 Different Eating Habits

Can I Keep Guinea Pigs and Rabbits Together? 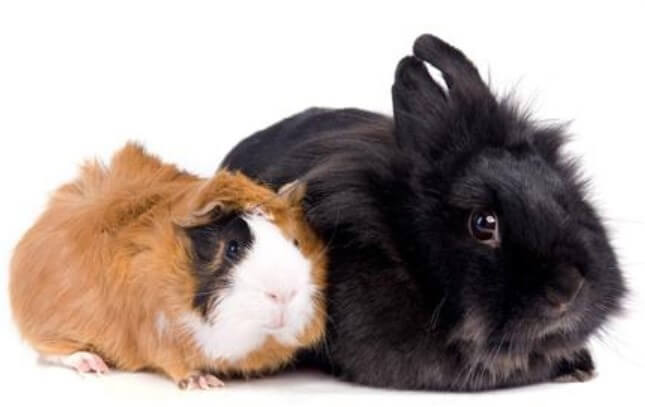 In fact, the animals mostly tolerate each other – after all, in a cage, they have no other choice. However, this does not mean that it is a species-appropriate form of husbandry. On the contrary: guinea pigs and rabbits have completely different needs and can even hurt each other. Apart from that, there are two different animal species, not conspecifics.

Reasons Against the Common Stance

One problem that can be seen at first glance is the rabbit’s physical superiority. A guinea pig weighs between 700 grams and 1.6 kilograms. The weight depends on the sex, size, age, and state of health of the animals, but should be roughly within this range. A fully grown rabbit can weigh between 1.2 kg and 8 kg, depending on the breed. So no attack is necessary for a guinea pig to be injured or even killed by a rabbit. An awkward jump or an accidental kick is enough.

Lonely Together: the Animals Don’t Understand Each Other

Rabbits and guinea pigs also have completely different sounds and body language. While rabbits cuddle up with fellow animals and seek their proximity, guinea pigs, for example, do not. If the rabbit snuggles up to the guinea pig, it means a lot of stress for the pig. Mutual grooming is also not anchored in the social behavior of guinea pigs, but it is in rabbits. In the worst case, the guinea pig is groomed in such a manner, whereas the long-eared pig lacks this form of approach. Even the varied spoken language of the guinea pigs cannot reciprocate a rabbit. Since rabbits only squeak when they are in pain or fear, the constant noises made by the guinea pig are rather disturbing to rabbits. 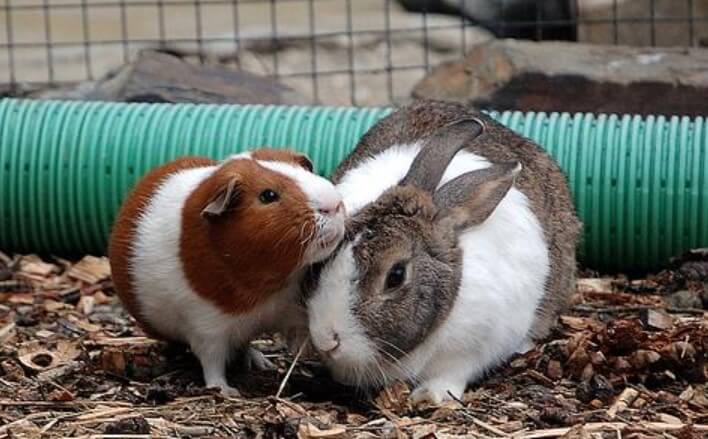 The diet of the animals is also incompatible. Unfortunately, small animals and rodents are often poorly fed, which can have serious consequences for the health of the animals. This also applies to guinea pigs and rabbits, but especially if both animals are kept together. In contrast to rabbits, guinea pigs have to take in vitamin C through their diet. This is unhealthy for rabbits and in the worst-case scenario can lead to disease.