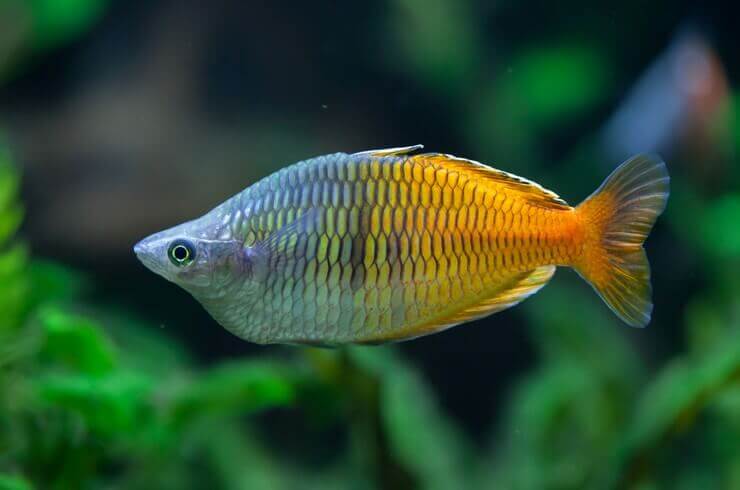 These rainbow fish reach a length of about 10 cm in the aquarium. In large aquariums from 400 l, however, it can also be 12 cm or even more.

The males are metallic light bluish in front in normal color, through the middle, there is a faint, vertical, dark stripe and the rear body is orange. The females look like a paler image of the males. During courtship (morning and evening, especially glorious in the morning sun), the colors of the male change. The front part of the body turns steel blue to almost black, the median stripe black, and the rear part bright orange. With some color variants, the rear part of the courtship can also be yellow or bright red.

Boeseman’s rainbowfish comes from the Ajamaruseen in the center of the Vogelkopf Peninsula in western New Guinea (West Papua) and some adjacent rivers and lakes.

Rainbowfish – also this species – are permanent spawners. This means that the females lay some very small eggs every day, which are then directly fertilized by the male. They are very adhesive and hang on the plants or on an extra spawning mop in a separate spawning aquarium. They are very hard and can also be read and placed in a separate small aquarium. After about a week, the very small cubs hatch and immediately need food such as small infusoria or microalgae (Chlorella, Spirulina), but are then easy to raise.

Boeseman’s rainbowfish can live to be over 10 years old.

These rainbow fish are omnivores and will not take any food that is too large. Since they can always find food in the aquarium (algae, also duckweed), they should be given one to two fasting days per week. Young fish, however, have to be fed more often (initially several times, up to about 5 cm in length twice a day).

Rainbowfish like Boeseman’s rainbowfish only feel at home in a group. Since the males can drive quite strongly, there should always be one to three more females than males. However, it is also possible to keep a squad that only consists of males, as the arguments are always peaceful.

An aquarium from 300 l is sufficient for a small group of up to ten animals (corresponding to an edge length of 1.50 m). The larger the aquarium, the larger Boeseman’s rainbowfish can become, and in very large aquariums (from 600 l) 15 cm has already been reached.

Part of the aquarium should be densely planted so that the females can retreat there if the males chase them too hard. Stones and wood are not necessary, but stones do not interfere. Wood, on the other hand, could possibly lower the pH value due to the tannins it contains, which would usually be unfavorable for keeping this fish. The substrate can be any, as Boeseman’s rainbowfish never visits the bottom.

Provided that the tank is large enough, Boeseman’s rainbowfish can be kept with all other peaceful fish. However, they should not be bigger than him, otherwise, he could become shy, withdraw and not show the most beautiful colors. Since it lives in the middle layers of water, fish are particularly suitable for the bottom ground and those that live near the surface. 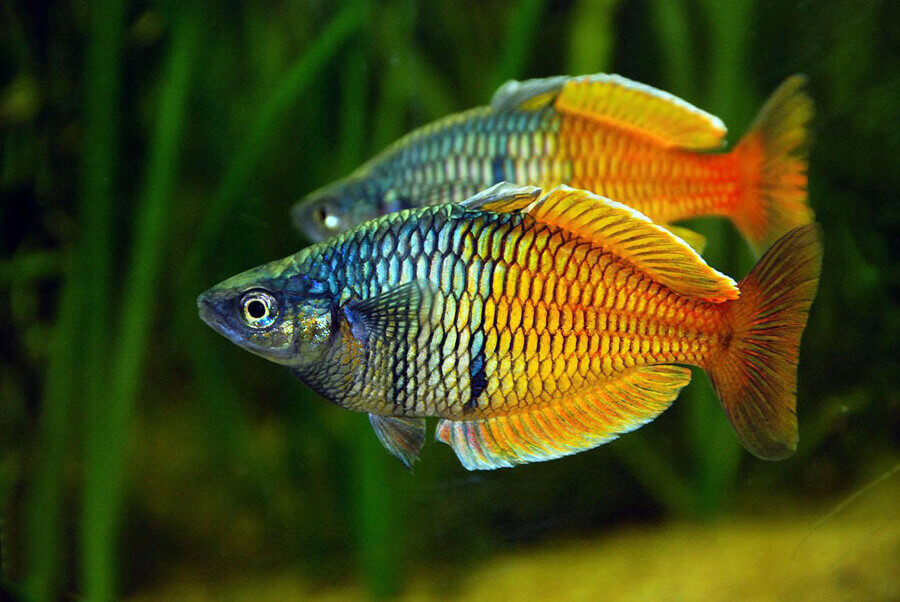