If you want to have color in your aquarium and at the same time want to keep a fish that is easy to care for and that is easy to breed, the Platy is the best choice. His lively behavior makes him one of the most popular aquarium fish of all. 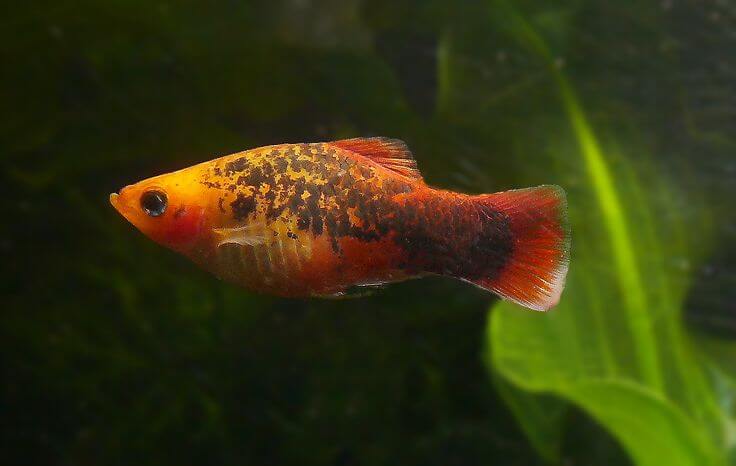 Interesting Facts About the Platy

In nature, the males grow to around 4 cm, the females around 6 cm. In the cultivated forms, the males can also reach 5 cm, rarely 6 cm in length, the females up to 7 cm.

In their homeland, the platys are among the inconspicuously colored fish. The body is mostly beige with a bluish tinge. There are various black spots and dots on the tail stalk. The cultivated forms can show almost every imaginable color, from white and flesh colors to red, yellow, blue, greenish to black and all possible nuances and piebalds. The drawings on the tail stalk, which can be very different in nature within a population, are always similar in the cultivated forms within a cultivated form, for example in the Mickey Mouse Platy with one large and two smaller black spots below and above.

The platys inhabit almost exactly the same area as the swordtails, from Mexico (south of Xalapa) to northwestern Honduras in waters that flow to the Atlantic. However, due to the release of aquarium fish, platys can now be found on all continents. In Europe, however, they only occur in warm waters (Hungary, Margaret Island in Budapest, around Heviz).

Platys are viviparous. The courtship of the platys is relatively inconspicuous, the male presents himself close to the female and swims back and forth in front of him before mating. After about four weeks, up to 100 young who is already an image of their parents are littered. These chase after the young, but not so intensely that with sufficient planting some will always get through.

Platys have a life expectancy of up to around three years, and a little more if they are kept a little cooler at 22-24 ° C.

Platys are omnivores that can be kept with a pure dry food diet. They also repeatedly pluck algae from plants and decorations, but also like to take frozen and live food, which should be served once or twice a week.

Since platinum males compete with one another, but not as strongly as swordtails, three to four pairs can easily be kept in a 54-liter aquarium. A slight excess of males or females is not a problem.

Due to the small final size and the peaceful nature, platys can be kept in aquariums from 54 L (60 cm edge length). Several pairs fit in here. If there are plenty of offspring, a larger aquarium makes sense.

In nature, platys also occur in almost plant-free waters, in which thread algae thrive. Partial planting with finely pinned plants such as najas or mosses, but also stem plants such as rotala, is therefore useful.

As long as the aquarium size allows, platys can be kept together with other equally peaceful fish. In the presence of larger or very active fish (such as many barbels), however, the platys can become shy and worried. Healthy platys that feel good are always in motion and rarely hide. 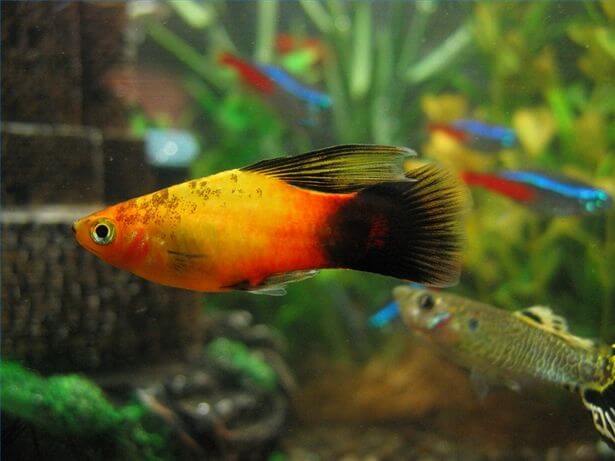 The temperature should be between 22 and 28 ° C, the pH value between 7.0 and 8.0. Slight deviations up and down – except for a pH value that is too low – are well tolerated for a few weeks.