Bison is the largest land mammal in Europe. It even grows larger than its closest relative: the bison.

The sight of a wisent inspires respect: after all, a male animal is up to two meters high, 250 to 350 centimeters long and weighs up to 1000 kilograms – a real powerhouse! The females are about a third smaller than the males. What is striking about the wisent is their massive build and the large, deeply lowered skull. The bison’s highest point is its shoulders, which form a high hump, the so-called withers.

The thick, shaggy, chestnut to dark brown fur makes the animals appear even bulkier than they already are – it is excellent protection against the bitter cold. The hair is particularly long on the neck and nape of the neck. When the bison change their fur, the old fur comes off in large pieces. They then have real holes in their fur until the new one grows back.

The tail measures 50 to 80 centimeters and also has long hair at the end. Both males and females have pointed horns that curve slightly inward. In the males, they are up to 51 centimeters long. Like our domestic cattle, the bison belongs to the bovid family and to the even-toed ungulate order.

Where do bison live? 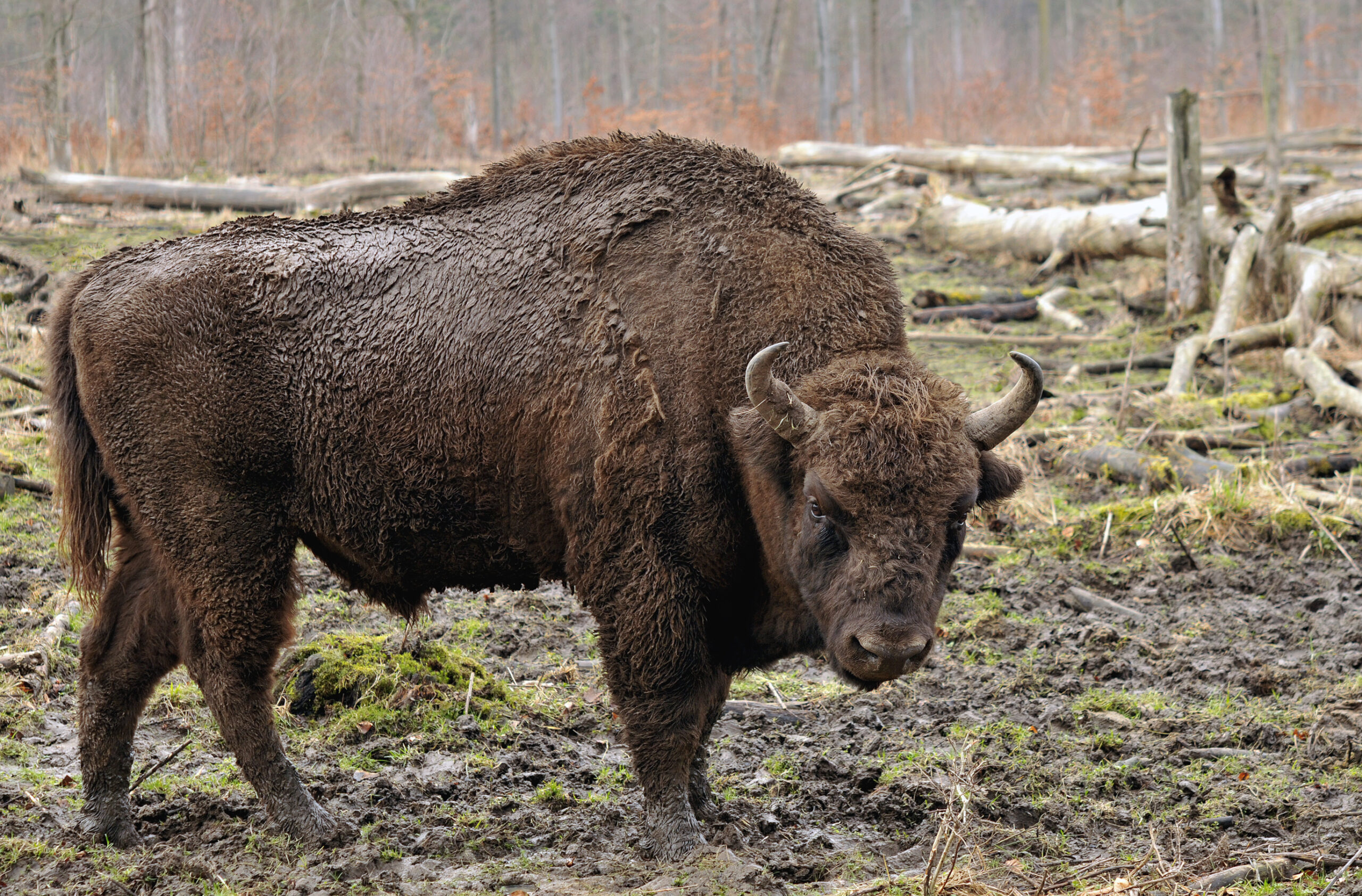 Bisons used to live in all zones of Europe and Asia with a temperate climate. At the beginning of the last century, they were extinct in the wild because they were hunted and their habitats, the forests, were cut down.

In contrast to bison, which live in the prairie, bison mainly live in sparse deciduous and mixed forests, which also have moist areas. But they also occur in the forest-steppe and in wide mountain valleys.

What types of bison are there?

There are two subspecies of the bison: the lowland bison and the mountain bison from the Caucasus.

The North American buffalo, also known as bison, is very closely related. Although it is somewhat stronger in shape, it does not grow quite as tall as the wisent. Bison and wisent are so closely related that they can even interbreed and have offspring. Some scientists even consider bison and wisent to be two subspecies of the same species – not two different species. A close relative of the wisent was the aurochs, which became extinct at the beginning of the 17th century.

How old do bison get?

How do bison live?

Bison are active both during the day and at night. They usually rest around noon. During the day they wander through their habitat in search of food. Bison are sociable animals.

The females live with their young and young animals that are already independent in herds of up to 30 animals; in winter there are sometimes up to 50. The herds are led by an old, experienced female. The adult and older males often travel alone or form small groups. They only join the herd with the females during the rutting season. This is not always peaceful: the bulls fight over the females, they roar loudly, snort, stomp, and dig up the ground with their horns.

Sometimes it’s not just about showing off and two bulls really fight with each other: Then it can happen that they injure themselves badly with their horns and one of the animals even dies. The females live year-round under the protection of the herd. Only when they give birth to their young do they leave the group for three to four weeks. In spring, the herds of females split up into smaller groups of eight to 20 animals, and in winter they regroup into a larger group.

Bison can run very fast: If they have to flee, they can reach a speed of up to 60 kilometers per hour and jump up to two meters high. In addition, bison are good swimmers. Bison were important hunting animals for our ancestors: this is shown by ancient cave drawings depicting bison.

Friends and foes of the bison

The mighty bison have few enemies. Only wolves and bears can be dangerous to weak and sick animals or young animals. Adult bison can defend themselves well against this: if there is danger, they line up side by side in a group to fight the opponent.

This tactic helps against wolves and bears, but not against poachers’ bullets: Bisons used to be popular because their meat was sought after and their skin was processed into leather. Today bison are no longer allowed to be hunted.

How do bison reproduce?

The bison’s rutting season is in August and September. Nine months after mating, the females give birth to a young in May or June. 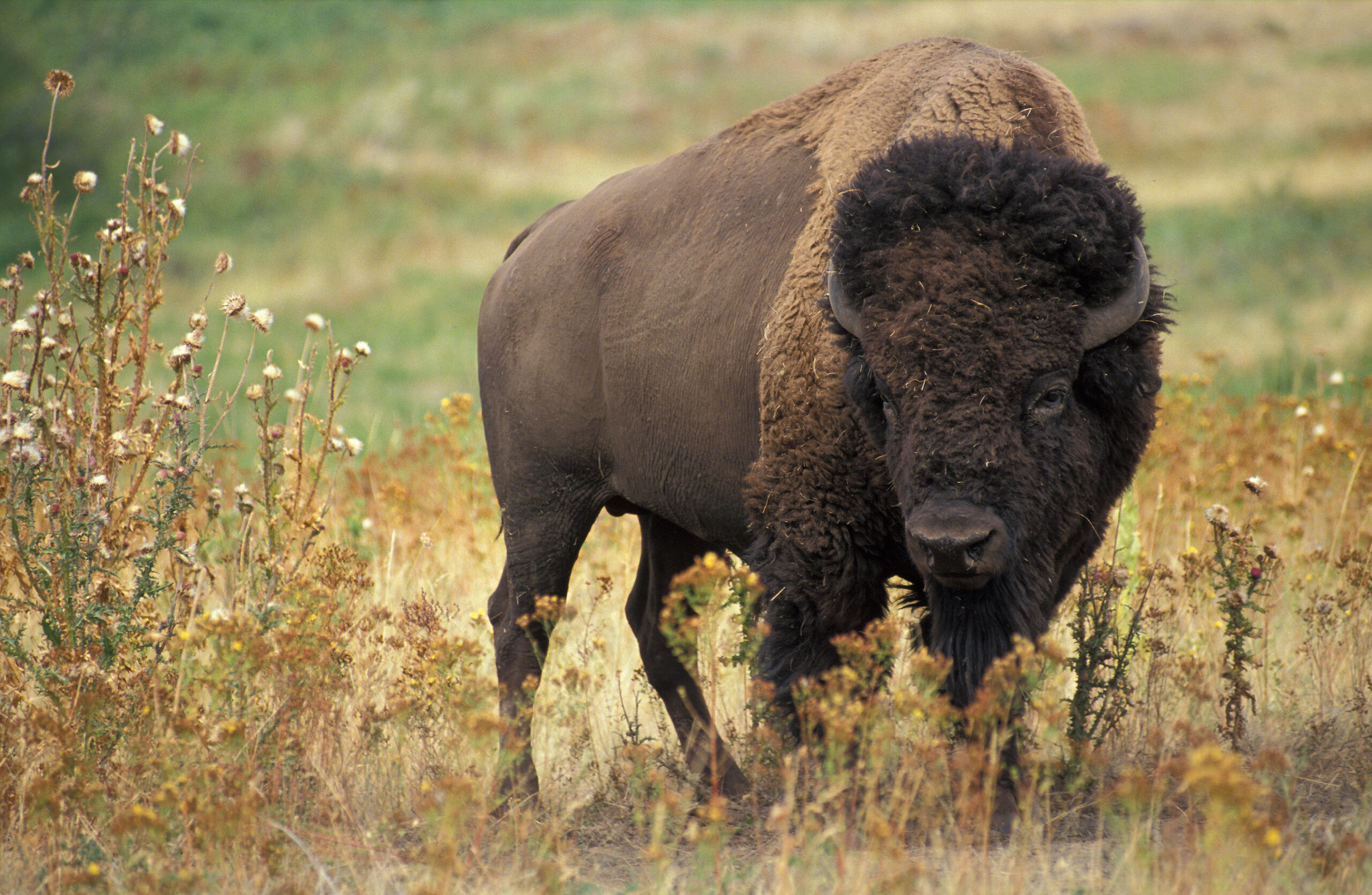 The little ones weigh 30 to 40 kilograms. They are suckled by their mother for around six months, but after only three weeks they are already nibbling on the first blades of grass. At the age of one they are independent, but still, remain close to their mother. They are sexually mature in their third year of life. But the males are only fully grown when they are six to eight years old. Female bison usually only give birth to a young every two years.

How do bison communicate?

Bison can grunt, snort and growl.

What do bison eat?

Her favorite plants include willow, aspen, alder, shrubs such as raspberries, blueberries, blackberries, and heather. In the fall, they munch on a thick layer of fat for the winter with acorns, beechnuts, and berries.