Wild boars are among the largest animals still found in the wild in Central Europe. However, they are rarely seen as they hide well in the undergrowth.

Wild boars have a wedge-shaped head; the snout itself is blunt and ends in a proboscis. The eyes and ears are quite small. The head, almost without a neck, merges into a massive body covered with a brown-black bristle fur. A short tail dangles at the back.

Wild boar can weigh up to 200 kilograms and grow to almost a meter in height. The males, called boars, are easily identified by their long teeth: the canines protrude from the top and bottom of the boar’s mouth. They grind each other down into edged weapons. The females – the so-called brooks – also have canine teeth; but these teeth are shorter than in the males.

Where do wild boars live? 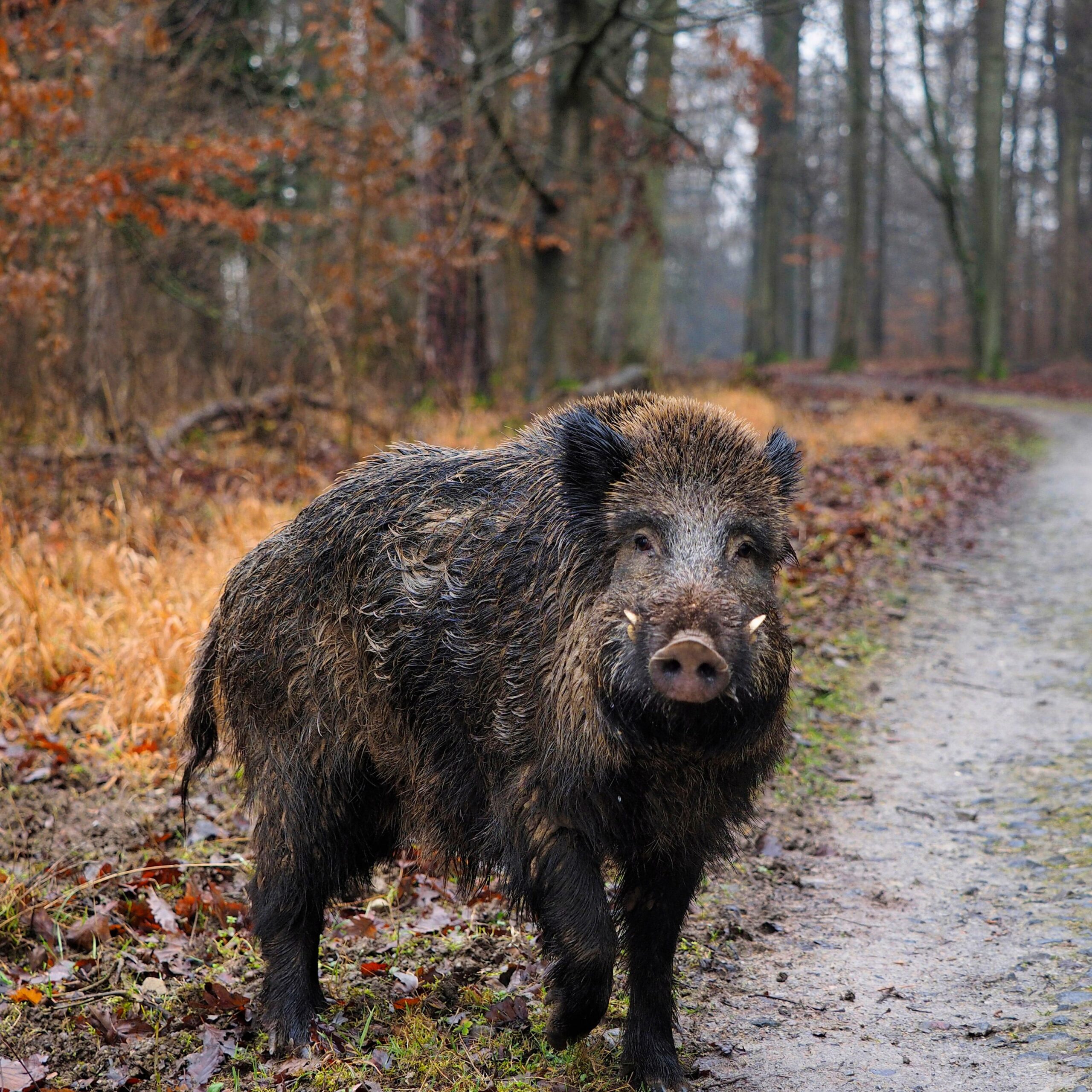 The wild boar is widespread throughout Europe. In the south, its homeland extends to North Africa. In the east, the range of the wild boar ends in the western regions of Asia. Two things are particularly important to the wild boar: it must be able to hide and it loves the water. Otherwise, wild boars easily adapt to their environment. They live on lakeshores, in reed belts, swamps, paddy fields, and forests. And they even colonize tropical coasts or areas in the high mountains.

What wild boar species are there?

The wild boar belongs – as the name suggests – to the pigs. More than 5000 years ago, humans made wild boars their pets. The different breeds of domestic pigs descend from the wild boar. Pigs have been bred for around 200 years, giving rise to many new breeds.

How old do wild boar get?

Wild boar can live up to 30 years in captivity. In the wild, however, they often only reach an age of eight to twelve years.

How do wild boars live?

Wild boars are real powerhouses, running fast and easily carving their way through thickets with their wedge-shaped heads and bodies. Sometimes they cover distances of up to 20 kilometers on their forays. They can also swim for miles and have good hearing.

They also have a very fine sense of smell. With it, wild boar can even smell truffle mushrooms that lie deep in the earth.

Friends and foes of the wild boar

The wild boar hardly has any natural enemies anymore because humans have largely eradicated animals such as wolves, bears, and lynxes.

How do wild boar breed?

In November, the boar recognizes from the smell that the sows are ready to mate again. He joins the herd, the family group of wild boars, and engages in fierce battles over the brooks with boars of the same age or strength. The younger boars prefer to move away or they will be chased away.

The gestation period of the sow lasts four to five months. Shortly before giving birth, she separates from the pack. She digs a hollow in the ground in a sheltered spot, which she then pads out. Three to twelve piglets are then born in it. The young animals have hair from the beginning and can already see.

They weigh between 800 and 1,100 grams and are nursed for about three months. Pigs are easy to recognize because they initially have a special pattern: Several light brown vertical stripes run along with the dark brown fur.

At the age of about six months, the piglet markings disappear. The animals become sexually mature at nine to 18 months. They are fully grown after two to five years. If there is enough food, sows can get pregnant more than once a year.

How do wild boar communicate?

When danger awaits, the wild boar snort; this snorting is also called “blowing”. Before the animals flee, they often let out a snort that is reminiscent of the barking of dogs. Otherwise, they grunt at every opportunity. The little newbies, on the other hand, squeak if something doesn’t suit them. 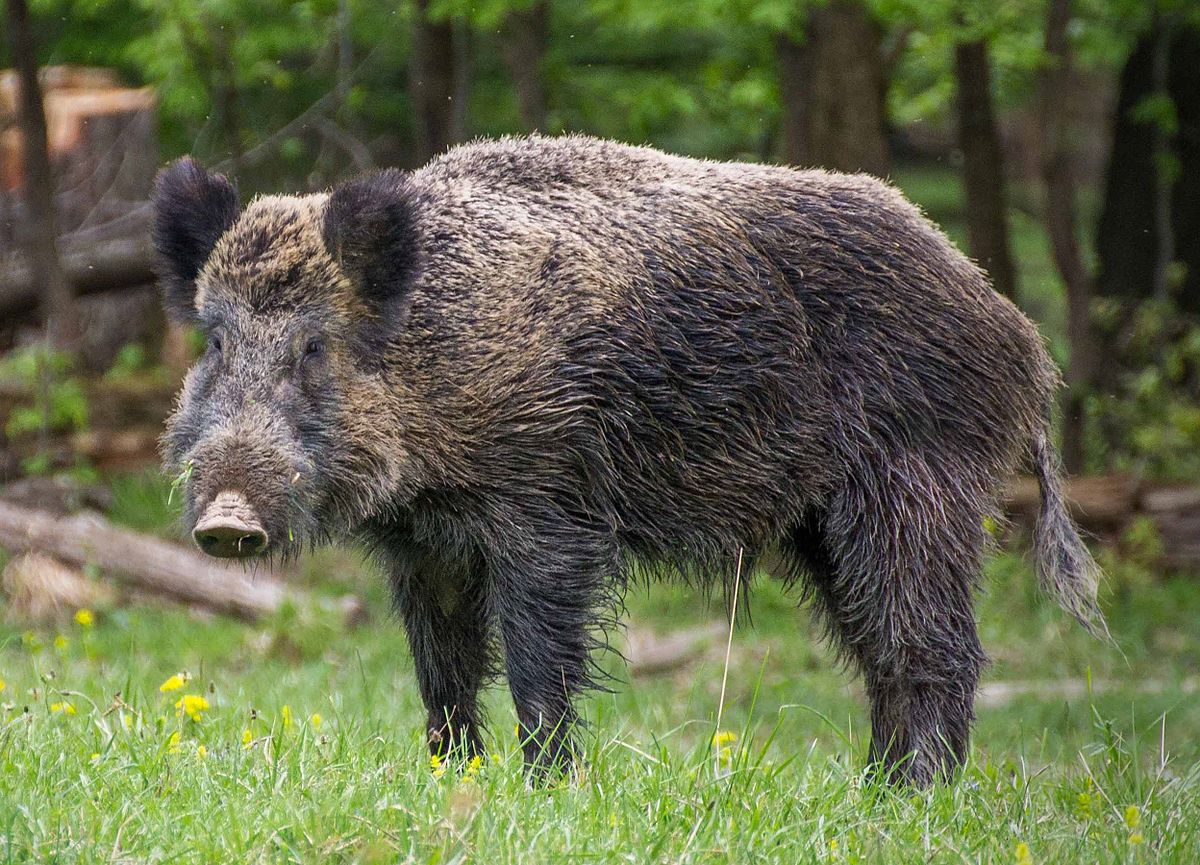 What do wild boars eat?

Wild boars are omnivores. In autumn they eat acorns, chestnuts and nuts. In spring they feed on bracken, hogweed, and various grasses. They also dig in the ground to bring some variety to the menu. They dig for roots, mouse nests and grubs. But the wild boars don’t leave mushrooms, tubers, and carrion lying around either. In other regions of the world, wild boars also eat mussels, crabs, fish, and bananas.