African ground squirrels look a bit like squirrels. But they are significantly larger and their fur feels very hard. That’s where her name comes from.

Ground squirrels have the typical squirrel shape and a long, bushy tail. This serves as a parasol: you hold it in such a way that it shades your body. The shaggy, hard coat is grey-brown or cinnamon brown to beige-grey, the belly and inside of the legs are light gray to whitish.

As with all rodents, two incisors are formed into incisors in the upper jaw. These grow back for a lifetime. Ground squirrels have long whiskers, so-called vibrissae, on their snouts. They help the animals to find their way around. The ears are tiny, pinnae are missing. The legs are strong and the feet have long claws with which the animals can dig well.

Where do African ground squirrels live? African ground squirrels like open habitats like savannas and semi-deserts where there are not too many trees. However, they also inhabit sparse bushland and rocky habitats in the mountains.

What types of ground squirrels are there?

How old do African ground squirrels get?

It is not known how old African ground squirrels can get.

How do African ground squirrels live?

African ground squirrels are diurnal and – unlike our squirrels – only live on the ground. They live in colonies in underground burrows that they dig themselves. This is where the animals retreat to rest and sleep and find shelter from both their enemies and the extreme heat at midday. In the morning they leave their burrow and warm up in the sun before going out in search of food.

The Cape ground squirrels build the largest burrows. They consist of a widely branched system of long tunnels and chambers. Such a maze can extend up to two square kilometers and have up to a hundred exits! The dens of the Kaokoveld ground squirrel are smaller and simpler, they only have two to five entrances. Female ground squirrels defend their burrow against conspecifics who do not belong to their colony.

Not much is known about the behavior of ground squirrels. But we know that the animals warn each other. When they spot an enemy, they emit shrill warning calls. As a result, all members of the colony quickly hide in the burrow.

Friends and foes of the ground squirrel

African ground squirrels have numerous enemies. For example, they are hunted by raptors and predatory mammals such as jackals and zebra mongooses. Snakes are also very dangerous for squirrels. 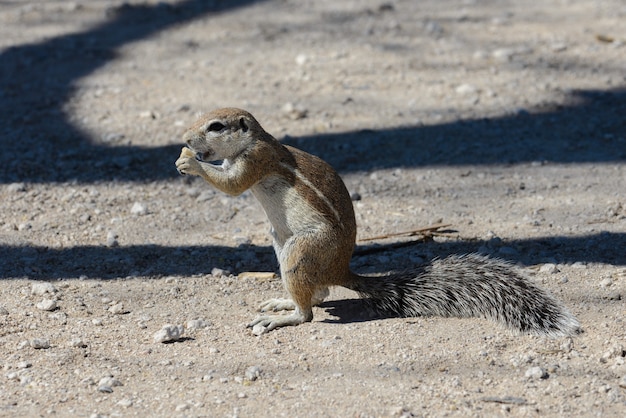 In South Africa, the ground squirrels are not popular with some farmers because they eat grain and crops in addition to wild plants. They can also transmit diseases, including rabies.

How do ground squirrels reproduce?

About six to seven weeks after mating, a female gives birth to one to three, a maximum of four young. Babies are born naked and blind. They remain in the burrow for about 45 days and are cared for and suckled by their mother. The offspring are independent at around eight weeks.

How do ground squirrels communicate?

In addition to shrill warning calls, African ground squirrels also make other sounds to communicate with each other.