The binturong, or sable bear, is an unusual tree dweller: the only mammal in the Old World, it has a prehensile tail that enables it to climb dexterously.

Bear, cat, marten, or dog? At first glance, you really don’t know which animal group to classify the binturong in. But the animal with the disheveled fur, which initially seems a bit clumsy, belongs to the family of the civets and thus to the cat-like family and to the order of predatory animals.

In contrast to cats, civets have a long snout, a long body, and short legs. In the civet family, the binturong is the largest representative of the palm roller subfamily. Since it is a bit reminiscent of a marten or a small bear-like raccoon, it is also called a marten bear. 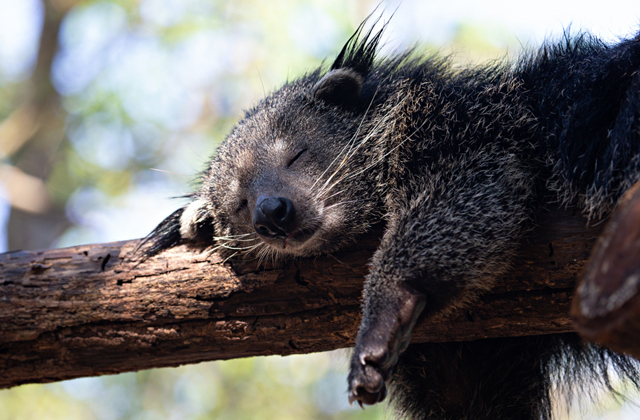 Binturongs measure 61 to 96 centimeters from head to bottom. The tail measures another 56 to 89 centimeters. They weigh 9 to 14 kilograms, some even weigh up to 20 kilograms. The tail is the typical feature of the binturongs: It is designed as a prehensile tail, with which the animals can hold on to branches when climbing.

Binturongs are the only mammals in the Old World – that is, in Europe, Asia, and Africa – that have such a prehensile tail. Their fur is quite long, a little tousled, and colored dark gray to black, the head is usually a little lighter. The white ears with the black tufts of hair and the white whiskers on the snout are striking. The legs are fairly short and strong. The bite is quite small.

Where do binturongs live?

Binturongs are native to Southeast Asia from India to the Indonesian islands of Sumatra, Java, Borneo, and Palawan. Binturongs are pure forest dwellers. They live in trees in the dense tropical rainforests of their homeland.

What species are binturongs related to?

The civet family includes around 70 different species. Most are much slimmer and more delicate than the binturong, which used to be classified as a small bear because of its appearance.

How old do binturongs get?

Binturongs can live quite a long time: a captive binturong is known to have lived for 25 years.

How do binturongs live?

Not much is known about the lives of binturongs in the wild. They are nocturnal animals. Because of this, they can see very well at dusk, and they also have well-developed hearing and a good sense of smell. Although they may appear sluggish at first, they are perfectly adapted to life in the trees.

However, they move relatively slowly and deliberately in the branches but can climb skillfully and safely. They use their prehensile tail as a fifth hand and use their claws to hold onto their feet when climbing. They are also good at swimming and diving.

When they move on the ground, they tread like a bear with the whole sole of their feet – this is very unusual for civets. They mark their territory by sliding along branches with their buttocks, marking the branches with scents from a gland located between their hind legs. Curled up in the treetops, they spend the day sleeping.

Friends and foes of the binturong

Larger predators can become dangerous for the binturong.

How do binturongs reproduce? 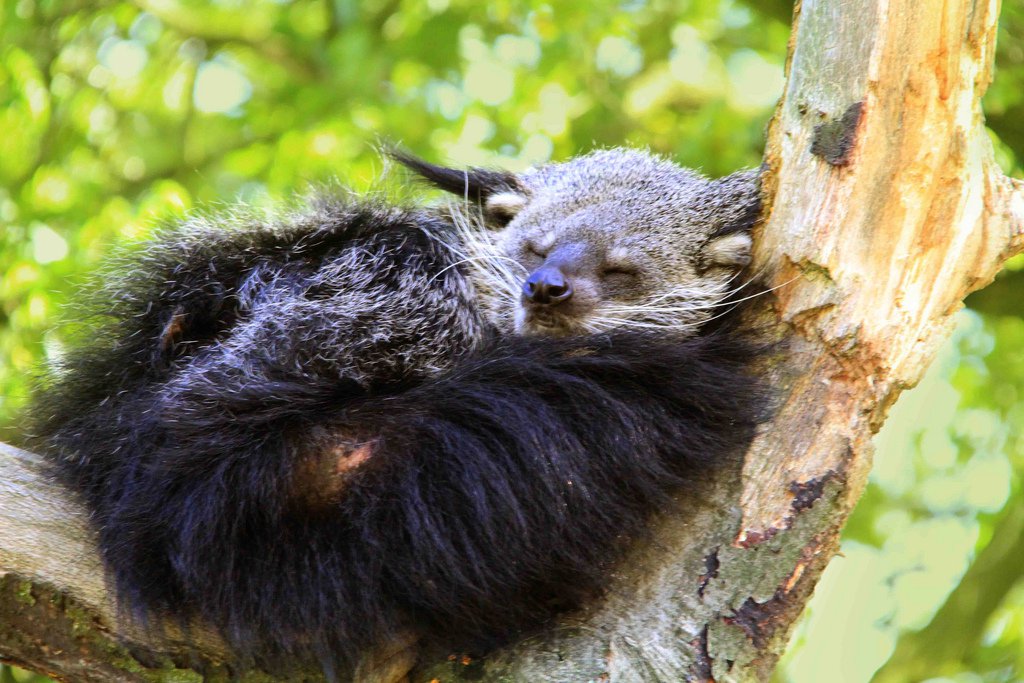 Binturongs become sexually mature at the age of two and a half years. A female can have cubs twice a year. The mating season is March and April and October and November. After a gestation period of 88 to 98 days, usually two to three, but sometimes six almost naked young are born. First, they are suckled and remain hidden in their mother’s fur, which defends them from enemies with growls and growls. After six to eight weeks, they switch to solid food. Binturongs usually live in pairs and take care of the young together.

How do binturongs communicate?