Squirrel monkeys belong to the family of capuchin-like monkeys and are very small: They are just 23 to 37 centimeters tall. With the tail, they measure 35 to 45 centimeters. The females weigh up to 750 grams, the males up to 1100 grams. They have a very light face with a dark muzzle.

That’s where her name comes from because the drawing of her face is a bit reminiscent of a skull and crossbones. The top of the head is colored gray to black, the sides of the neck are white. Her fur is mottled gold olive and black on her back. Belly and legs are yellowish to orange in color. The long tail is also olive in color and has a black tip. The squirrel monkey’s ears are light-colored and quite pointed.

Squirrel monkeys belong to the so-called New World monkeys. In contrast to the Old World monkeys from Asia and Africa, they only occur in America and are a very original, old monkey species.

Where are squirrel monkeys found?

Squirrel monkeys live in many areas of Central and South America.

Where do squirrel monkeys live?

Squirrel monkeys are mainly found in the middle tree regions of the forests of South America. This means that they rarely descend to the ground, but neither do they climb to the top of the jungle trees. They particularly like forests with rivers and lakes. There they occur at altitudes of up to 1500 meters.

What types of squirrel monkeys are there? 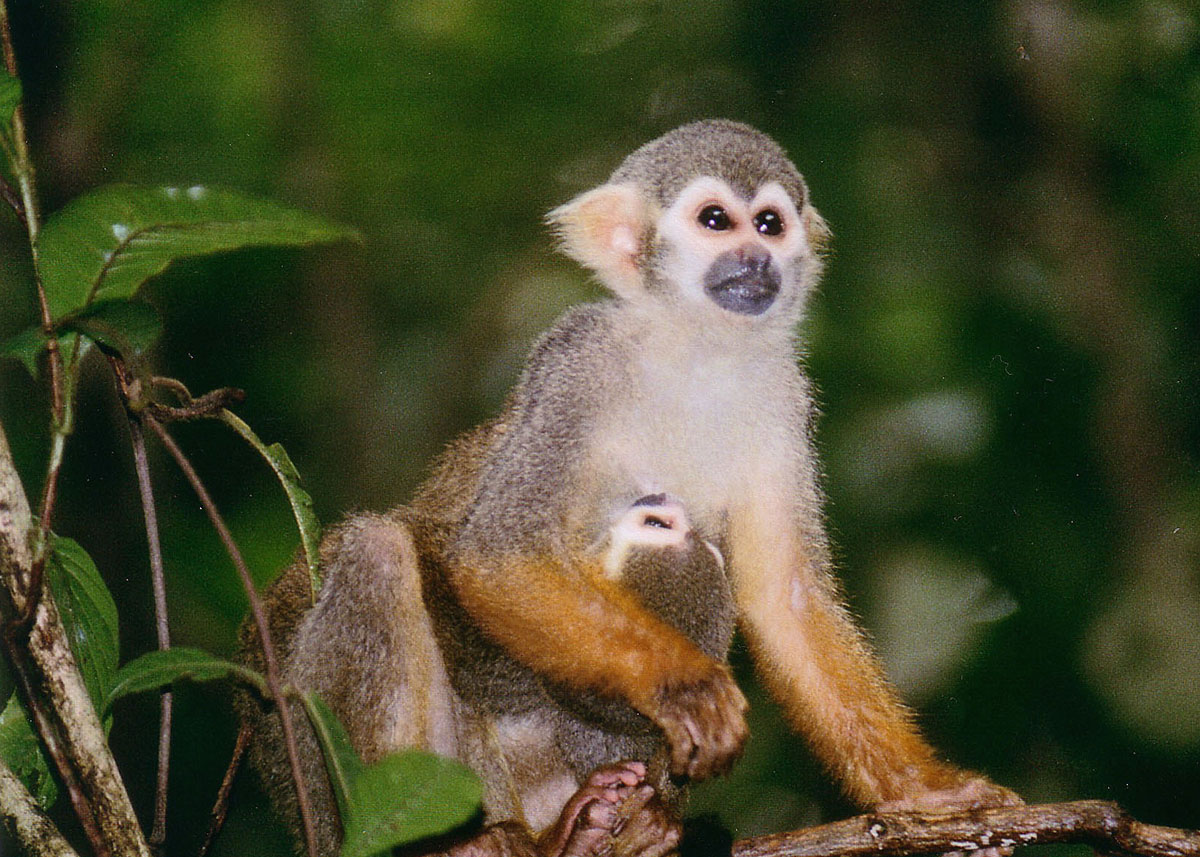 There are several subspecies of squirrel monkeys in South America, which differ from each other mainly in the color of their fur.

How old do squirrel monkeys get?

Squirrel monkeys can live over 20 years.

How do squirrel monkeys live?

Squirrel monkeys are diurnal and very social animals. They live together in a dense forest in groups with several females and males. There they can often hardly be seen between the leaves; they are usually only discovered by the loud noises they make.

But sometimes they move silently through the treetops and are then hard to be seen. Usually, there are ten to 50 animals, but sometimes even up to 100 or 300 monkeys that form a group. There is a strict hierarchy within these groups. Belonging to a group is very important for squirrel monkeys.

In order for the animals in a group to recognize each other, they rub urine on their fur. From this characteristic odor, they can smell whether a conspecific really belongs to their family or not. Unlike the Old World monkeys, the squirrel monkeys do not groom each other: each animal grooms and clean itself. Squirrel monkeys skillfully perform gymnastics through the jungle trees. However, unlike many other monkeys, they cannot use their long tails to grip; it is only used for balance.

Squirrel monkeys are very curious and quickly lose their shyness. They also become trusting towards people very quickly. Of all primates – including all apes and humans – squirrel monkeys have the largest brain in relation to their total weight: It accounts for 1/17 of their weight. For comparison: Our brain weighs only 1/35 of our body weight. Squirrel monkeys are therefore not necessarily much smarter than other monkeys, but they are particularly good at recognizing fast movements. They even manage to catch birds in flight.

In some areas of South America, the squirrel monkeys are considered the ancestor of all monkeys. That’s why they are called monkey-monkey monkeys there.

Friends and foes of the squirrel monkey

In addition to predators, humans are enemies of squirrel monkeys: we often keep them as laboratory animals and use them for medical experiments.

How do squirrel monkeys reproduce?

Squirrel monkeys become sexually mature at two to five years of age. However, only the highest-ranking males in the group are allowed to reproduce. 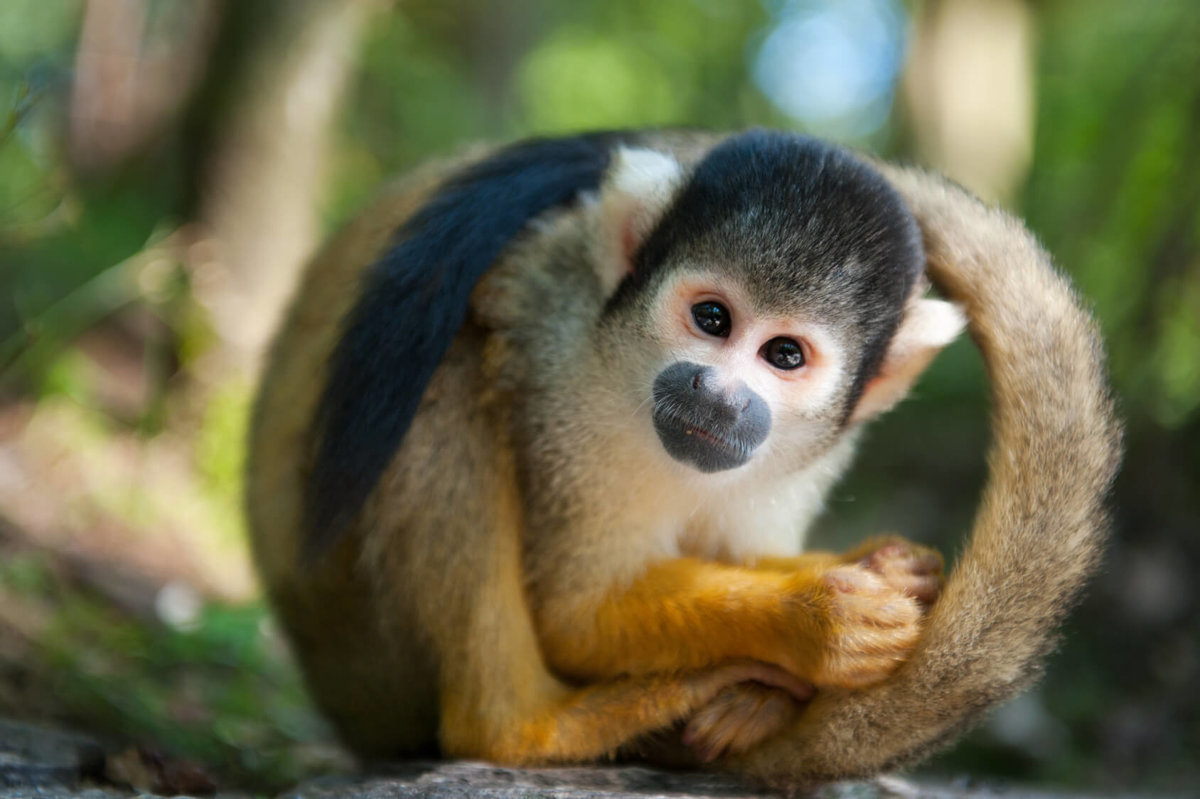 After mating in the spring, it takes 152 to 172 days for the young to be born. There is an interesting phenomenon: in a group, the young are all born at almost the same time. Each female has only one young, which is tiny: It weighs just 70 to 140 grams, is carried around on the mother’s back, and clings to her fur. The young are suckled by the mother for the first six months, after which they eat fruits and insects.

How do squirrel monkeys communicate?

What Do Squirrel Monkeys Eat?

Squirrel monkeys eat both plant and animal foods. They feed mainly on insects, fruits, and buds. But they don’t despise snails, spiders, or the occasional frog. Squirrel monkeys cannot tolerate sugar at all. Therefore, when kept in captivity, they must not be fed sweets under any circumstances.

Squirrel monkeys kept in captivity are very demanding: In addition to plant food, they also need very specific animal proteins. In addition, they are sensitive to worms and other parasites and also need a lot of vitamins so that they do not develop deficiency diseases.