At first glance, whales resemble fish. However, they are mammals that are perfectly adapted to life in the water. And: There is even a record holder.

The body of the whale is streamlined and the front legs are formed into flippers. Most whale species also have a fin on their back, the so-called fin. The individual species can be easily distinguished by their shape. However, some species such as the sperm whale do not have a fin. The tail of the whale is transformed into a large caudal fin, the so-called fluke. It is used for locomotion. The fluke is aligned horizontally to the body and not vertically as in fish – such as in sharks.

The entire body of the whale is covered by a thick layer of blubber, the blubber. It protects the animals from the cold. In large whales, the blubber can be up to 50 centimeters thick. The whale’s head is elongated. This is particularly noticeable in the baleen whales, which have very large heads with huge jaws. The baleen is housed in the jaw. These comb-like, fibrous plates of horn form the filtration or filtering apparatus that the animals use to filter the plankton out of the water. As their name suggests, toothed whales have teeth in their mouths.

Whales’ nostrils are reshaped into blowholes. Toothed whales have only one blowhole and baleen whales have two. The blowholes are at the top of the head above the eyes. Whales exhale through these blowholes. Toothed whales also show a typical bulge on their heads, the so-called melon. It consists of air and fat and is used for buoyancy in the water and the generation of sounds. Whales’ ears lie inside the head and do not open outwards. The eyes are on the side of the head.

Where do whales live? 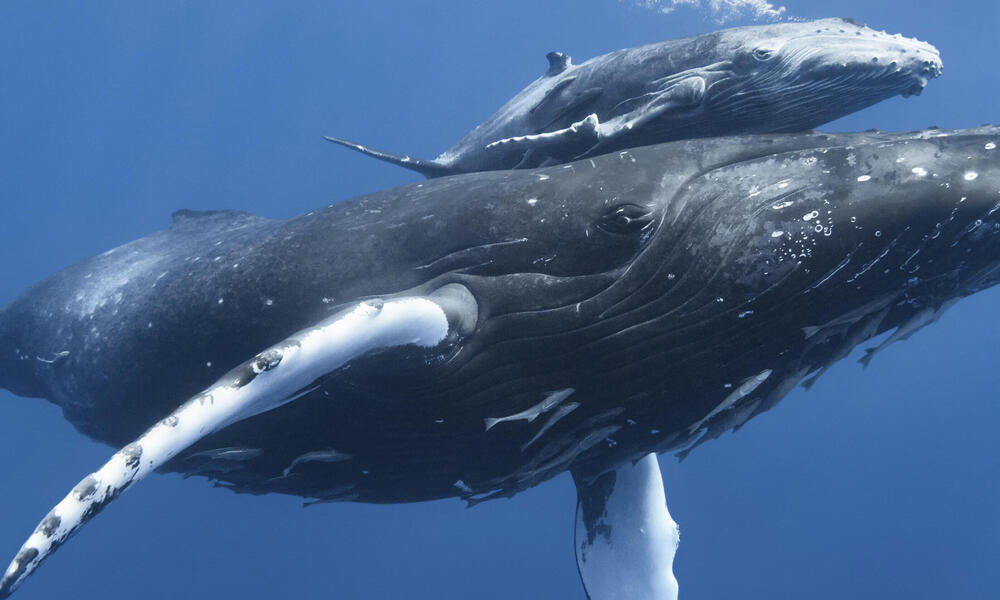 Whales can be found in all seas of the world. Some species such as killer whales, blue whales, or humpback whales populate almost all seas, others only occur in certain areas. The Hector’s dolphin, for example, lives only on parts of the coast of New Zealand.

Almost all whales live in the sea. The only exceptions are a few river dolphin species that live in rivers, i.e. in freshwater. An example is the Amazon river dolphin. Some whales live in shallow coastal waters, others in deep ocean zones. Some whales like the Bryde’s whale live only in tropical seas, others like the narwhal in the Arctic Ocean. Many whale species migrate: they give birth to their young in warm tropical seas. They then move to the nutrient-rich polar seas to eat up a thick layer of blubber.

What types of whales are there?

The ancestors of whales were terrestrial mammals that migrated to aquatic life around 50 million years ago and gradually evolved into perfect marine mammals. Scientists have found that whales are related to even-toed ungulates. Their closest relative on land is the hippopotamus.

The following species are among the most well-known whales: The blue whale is the largest animal that has ever walked the earth. It grows up to 28 meters, sometimes even up to 33 meters long, and weighs up to 200 tons. In comparison, elephants are almost lightweight: they only weigh up to five tons.

The blue whale lives in the North Atlantic, Pacific, Indian Ocean, and Antarctica. The giant is highly endangered today, there are only about 4000 animals left. Despite being massive, the blue whale feeds on microscopic plankton, tiny crabs, and small fish, which it filters out of the water. He can dive to a depth of 150 meters. With a length of 18 to 23 meters and a weight of 30 to 60 tons, the fin whale is the second-largest living animal. It can be found in all seas of the world and can dive up to 200 meters deep. He is very endangered.

Humpback whales can grow up to 15 meters long and weigh 15 to 20 tons. They live in the northern hemisphere in the Atlantic and Pacific as well as in the Indian Ocean. They can jump pretty far out of the water. The individual animals can be distinguished by the typical indentations on their tail flukes. When they dive from the surface to the depths, they curve their bodies into a hump, hence their name.

Gray whales are 12 to 15 meters long and weigh 25 to 35 tons. They are only found in the Pacific. They cover up to 20,000 kilometers on their migrations. Gray whales are often seen close to shore. You can easily recognize them by the fact that their body is colonized by barnacles. Killer whales are easily recognized by their black and white body markings and the long fluke on their back. They are five to ten meters long and weigh three to ten tons.

How old do whales get?

Whale species live at different ages. Dolphins like the La Plata dolphin live for around 20 years, while sperm whales can live between 50 and 100 years. 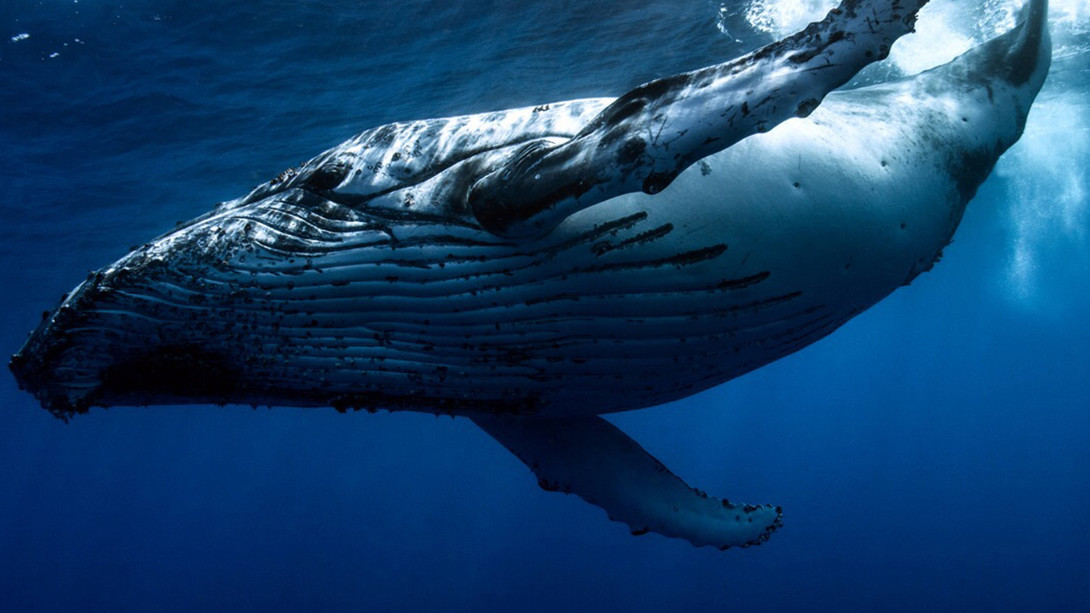 How do whales live?

Like all mammals, whales breathe with lungs and therefore have to come to the surface of the water to breathe. But you can dive for a very long time. The range extends from a few minutes to 40 minutes. The sperm whale can stay underwater for 60 to 90 minutes. On average, whales dive about 100 meters deep, sperm whales even up to 3000 meters.

Whales can swim fast. The blue whale, for example, normally travels at 10 to 20 kilometers per hour but can reach a speed of 50 kilometers per hour when threatened. This is possible, among other things, because whales have a very powerful heart, which distributes the oxygen it absorbs very well throughout the body. They can also exchange up to 90 percent of the air volume in their lungs with one breath. In a land mammal, it is only 15 percent.

Whales extract twice as much oxygen from the air they breathe as land mammals and they are better able to store the oxygen in their bodies. They also lower heart rate and blood flow when diving, so they use less oxygen. When whales breathe out through their blowholes, they expel the air at high pressure. Due to the lower outside temperature, the moisture contained in the 37-degree warm breathing air condenses. and a kind of fog fountain is created the so-called blow. In whales with two blowholes, the blow is often v-shaped. In contrast, the sperm whale’s blow, which has only one blowhole, exits at a 45-degree angle to the front left. With the giant blue whale, the blow can be up to twelve meters high. You can therefore recognize some whales from a long distance by their blow.