The snout grip is used by some dog owners as a kind of “panacea” in dog training, for example when barking or other unwanted behavior. The method is anything but effective! Animal rights activists also describe the reprimand as brutal and absolutely unsuitable for the species-appropriate handling of animals.

The snout grip is a grip in which the dog owner grips his four-legged friend from above over the snout and presses the lips against the underlying teeth with more or less strong pressure. For dogs, this is very uncomfortable and sometimes associated with great pain. Puppies and young dogs sometimes actually scream when the grip is applied to them. Therefore, you should not use this method to discipline your dog.

Animal rights activists and responsible dog owners reject any form of corporal punishment for dogs. Of course, there must be punishment sometimes, but please never use violence! Much better – and usually more effective – are indirect punishments such as the withdrawal of attention.

For dogs, the snout grab by their owner is a real physical assault. It can even lead to the four-legged friend becoming afraid of the hand of the master or mistress, snapping at it, and becoming aggressive. If a puppy bites after the snout grip, users need not be surprised.

In general, if an animal is brought up with pain, behavioral problems such as aggression or an anxiety disorder are usually the consequences. The human-dog friendship can be permanently damaged.

Dog owners who want to justify the muzzle grip in dog training often bring up a very specific argument: that the dog mother bites her puppies in the snout if they don’t behave. Unfortunately, this cannot remain the case.

In fact, dog mothers use the muzzle grip on their young if they do not want to listen to undesirable behavior even after repeated warnings. However, the intraspecific snout grip is not comparable to the painful grip on the muzzle used by humans.

A mother dog would never grab so hard that her puppies feel pain and squeal. The intraspecific snout grip is based on instinctive behavior that is extremely well controlled by the dog mother in order to prescribe her puppies a kind of educational rest. The puppy immediately stays still in its mother’s mouth, calms down, and is then released from its mother’s mouth.

Again, this step from mother to pup cannot be equated with a painful grip by a human on a dog’s lips. In addition, dogs also use the handle in a playful way. Without exerting any pressure, the dogs snap tenderly at the snout of a conspecific. 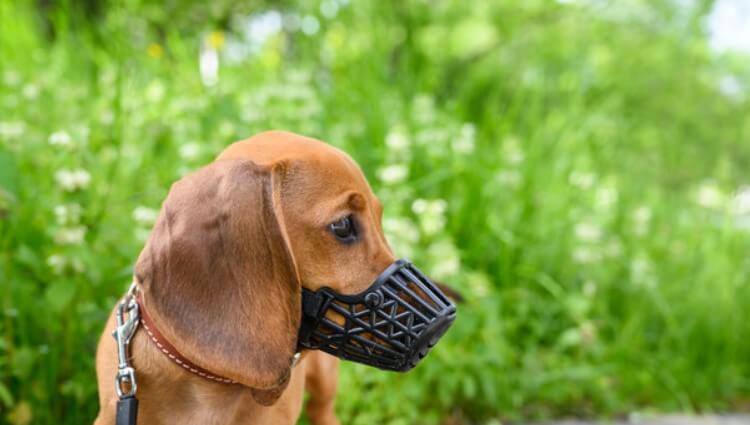 There are countless alternatives to the muzzle grip that you can use to train your dog in a much better and more animal-friendly way. Most important requirement: Take your time. Teach your dog important commands like “No!” right from the start. and “Off!” and stay consistent with the rules you set up. Then your dog will also stick to them.

A good – and above all non-violent – method of dog training is negative reinforcement: if your dog behaves in the way you want in a certain situation, a negative stimulus disappears. If your dog begs for food at the table, you answer with a resolute “No!” and a stern look. As soon as your dog stops begging, give him a friendly look again, removing the negative stimulus.

The method of positive reinforcement works exactly the other way round: here you reward desired behavior. For example, if your dog comes running to you when you call it, he gets a treat or is petted extensively.