Does your dog bark at people? It doesn’t matter whether it’s strangers, neighbors, or guests: If the furry nose panics loudly every time you have a visitor or walk past a person walking by, it’s equally exhausting for two- and four-legged friends. With a little patience, however, you can get this behavior under control.

Dogs have very limited opportunities to express themselves verbally. A dog barks at strangers for a variety of reasons. If you want to stop your animal companion from barking, you must first find out the motive of your four-legged friend: Why does your dog bark at other people?

Unlike humans, dogs do not have a wide range of verbal communication options. Barking can therefore express joy or fear, draw attention to needs such as hunger or going for a walk, or even say: “This is my territory. Go away!”. Some breeds are generally more “talkative” than others, such as Beagles, Terriers, or Miniature Schnauzers.

You can usually determine what your dog wants to say exactly from the situation and his body language. Try to answer the following questions:

The first step to less barking is to pay close attention to your furry friend.

Dogs are creatures of habit. Many, many times it was masters or mistresses who came through the door. As soon as something is heard at the door, the four-legged friend builds up a lot of energy to greet its owner happily, rushes to the door, and then – it’s not the loved reference person, but some stranger with whom he spontaneously doesn’t deal White. All the energy no longer has a destination and then often discharges itself in spontaneous barking.

Dogs that are raised without excessive greeting rituals are much less likely to bark at guests. For example, protection dogs have to be actively taught to stop (make noise) again, because their training actually makes them too stoic to feel the need to do so on their own.

Anxious Dog Barks at People: a Sign of Insecurity

Barking can often be a reflex when your dog is unsure or scared. Take this fear seriously and act without encouraging the dog to bark. Conditioned relaxation or distraction can help, but they don’t work in every situation. For the latter, you can, for example, talk quietly to your animal and distance yourself from the fear trigger (human, noise, or similar).

Conditioned relaxation, on the other hand, needs some preliminary work. Practice a certain signal word with your dog, which you specifically link to a relaxed situation for him. For example, massage or stroke your dog and say “quiet” or “easy”. Your dog will learn to associate the word with the relaxed state. After a little practice, the furry nose usually manages to calm down spontaneously in response to the signal word, even in agitated situations.

In the long run, however, you should build your dog’s confidence, such as going out more and getting them used to the unsettling stimuli. If necessary, get help from a veterinarian or an animal psychologist. 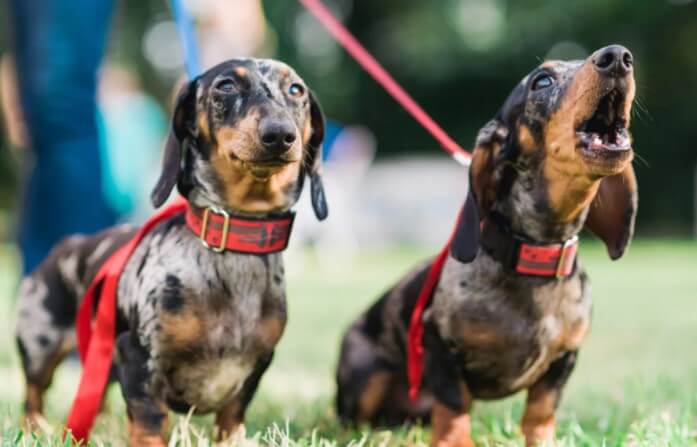 In fact, barking in the home can be an indication of an over-territorial problem. Especially if the excess of barking does not only take place when the visitor arrives but is also triggered by small things, such as a guest getting up from the table. Your dog barks aggressively at people because he sees them as invaders in his territory.

Give your four-legged friend security by showing him that he can rely on you as the ” leader of the pack ” and that you know what to do. Give the dog permanent spaces that actually belong to him, while the rest of the house is your domain.

4 steps to stop your dog barking at people

Stop Barking with Positive Reinforcement Only

Reward your furry friend for staying calmly in its place when the doorbell rings, or distract your dog in acute situations with play sessions. Calmness and patience are the be-all and end-all in dog training. If you scold your four-legged friend, he will at best understand it as barking back on your part and feel the urge to bark all the more.