There is hardly any other topic where the aquarists’ opinions differ as much as when it comes to “snails in the aquarium”. On the one hand, there are snail lovers who enjoy these creatures and their often useful properties in the aquarium, and on the other hand, there are also snail haters who do everything possible to meticulously eliminate animals introduced by new aquatic plants, for example. Certain types of snails naturally tend to multiply in large numbers if they are heavily fed in the aquarium, which is why they are a nuisance.

Snails eat algae in the aquarium 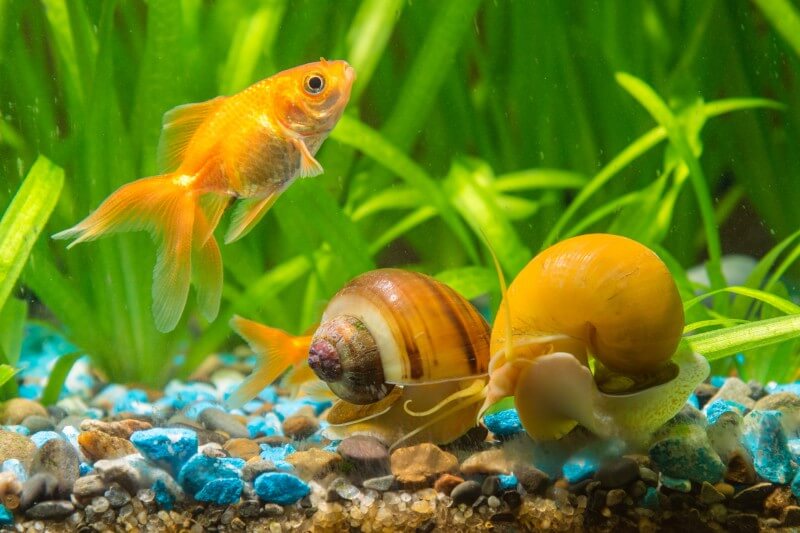 The snails most frequently bought in pet shops are the mermaid snails (family Neritidae) of the genera Neritina and Clithon, which can be kept in both fresh and brackish water aquariums. They are by far best suited as algae eaters and eagerly remove green algae growth or diatoms from the aquarium panes or other furnishings. However, these snails also have a major disadvantage because they regularly leave the aquarium and then dry up outside if it is not completely covered. Mermaid snails are separate sexes and cocoons with eggs are also regularly laid in the aquarium, but they do not develop offspring in the aquarium. In their natural habitats, the hatched larvae are drifted into the sea, where they continue to develop. This is not possible in the aquarium under normal conditions. The most frequently cared for mermaid snail is Neritina turrita, which is quite variable and z. B. is commercially available as a zebra or leopard racing snail.

Do snails have any other use in the aquarium?

Many snails grate soft algae coverings off the aquarium panes, but besides the mermaid snails, there are only a few really good and thorough algae eaters. But snails have another use in the aquarium and thus a raison d’être. For example, they ensure that food residues are not left in the aquarium and turn into rot. If they are missing, the water is heavily polluted, which can seriously affect the health of the fish.

Furthermore, many types of a snail also ensure that the ground is also “dug up” and loosened so that no rot spots can develop. A prime example of this is the Malay tower snail (Melanoides tuberculata), which can be very useful in this regard, also removes leftover food very well, but can also multiply very strongly if fed excessively. Because this snail is viviparous and quite productive.

Attractive snails that are of no great use

Among the tower snails, there are also larger species that can be up to 10 cm long but have a rather bizarre shell or an attractive color body. They can also be used to eradicate residues and loosen up the soil. But they are not very good algae eaters and are more demanding and less productive in their reproduction. That is why their use is limited and yet these snails have many hobby friends who are willing to dig deeper into their pockets for a single snail and spend more than 5 euros.

Such viviparous snails with an often bizarre shell are, for example, the representatives of the genus Brotia, which is widespread in Southeast Asia. Under good conditions, you can reproduce these snails in the community aquarium if there is not too much food competition from other snails.

The rock snails of the genus Tylomelania, which on the island of Sulawesi have incredible biodiversity and sometimes very contrasting or colorful body colors, are certainly the most expensive snails that can be purchased in pet shops. They like it a little warmer (around 25-30 ° C), but they can also be reproduced well in the aquarium.

What to do when the snails have reproduced en masse?

Only a few species tend to multiply on a massive scale in the aquarium if the food supply is too large. However, this is usually the responsibility of the caregiver, because he has fed so much that there is too much left for the snails. So it is best not to feed more than your fish will soon eat away.

In addition to the Malay tower snail, which in my opinion is only a minor evil (I sieve out my sandy bottom from time to time in order to remove too many snails from the aquarium!), The tip bladder snail (Physella acuta) in particular tends to become massive Multiplication. The animals are hermaphrodites so that a single juvenile snail is sexually mature after 6-8 weeks and can lay 50-100 eggs in slimy egg packets every week. Unfortunately, it is difficult to get a grip on bladder snails by collecting them. However, if you want to get rid of them, you can do this by purchasing snail eaters.

Getting rid of snails in the aquarium

For example, snails are the favorite food of many pufferfish and loaches of the Botiidae family (clown loach relatives), but some species of these fish groups are not necessarily sociable aquarium inhabitants. Individual species tend to bite the fins of the by-fish and harass them. An elegant way of combating snails is to use another snail, the predatory snail (Clea Helena). After a while, this usually reliably decimates the bladder snails until they completely disappear. However, it reproduces itself, however, by far not as massively, so that collection is not a problem. It also eats leftover food and carrion in the aquarium, but this snail is a pure carnivore.

Are all snails well preserved in the aquarium?

There are certainly snails that are so demanding that they are not suitable for a community aquarium. For example, the bizarre pagoda snails (Brotia pagodula) have a very high mortality rate, and offspring also rarely develop in the aquarium. Feeding special algae (e.g. Chlorella) might help here. However, it is better to keep your hands off such species. 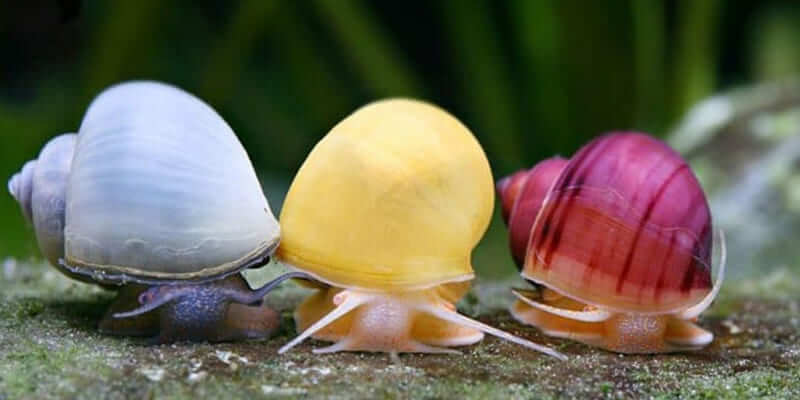 When buying an aquarium, you should definitely think about whether and which snails you want to keep, because some species can become a nuisance. However, I do not want to miss snails in my aquariums because, in my opinion, their benefit is greater than their harm. I value the Malay tower snail as a very important indicator of good water quality. If you come out of the ground en masse, either a water change is urgently necessary or the oxygen content of the water is too low. Aquariums with a good population of snails are definitely easier to operate for beginners, as they tend to feed a little too much.