In this entry, we want to bring you closer to rosebuds, a subspecies of the “lovebirds”. These little parrots make extremely interesting pets and are great for beginners too. Here you can find out where they come from, what kind of being they are, and how best to keep them.

Contents show
1 The Kind Behind It: Lovebirds
2 The Rose-head: Appearance & Nature
3 The Clowns Among the Parrots
4 The Attitude
5 Nutrition

The Kind Behind It: Lovebirds 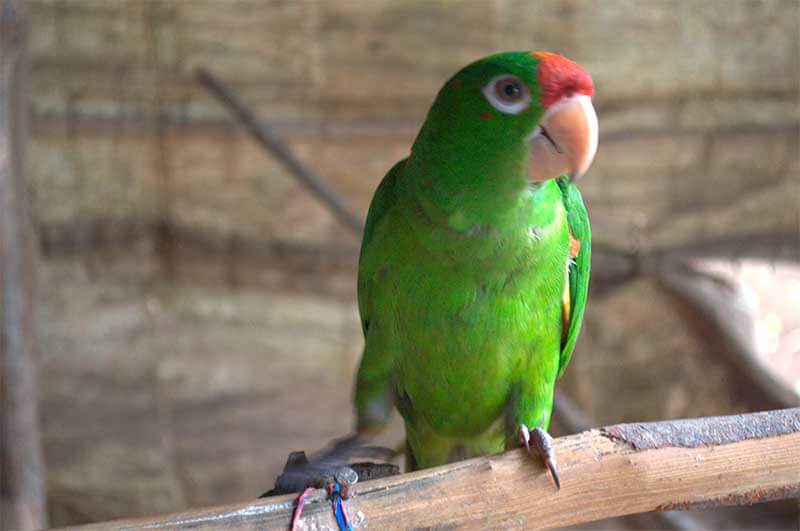 Inseparable (lat. “Agaporniden”) are a subfamily of the noble parrots, which are smaller parrots. These agapornids are compact and reach a size of up to 17cm. The main color of the plumage of the lovebirds is green, the head and chest, and, depending on the species, the beak is colored differently. The different colors make it relatively easy to distinguish between the species.

The agapornids originally come from South Africa, especially from Namibia and Botswana. They populate barren tree savannahs and semi-deserts here. Outside the breeding season, they migrate through their range in groups of over 20 animals. Large swarms can also gather at particularly popular feeding grounds. Here it often comes to the firm pair bond, which is characteristic of this species (hence the name). Allegedly, a bird should not survive the loss of its partner because of lovesickness. The species is not endangered in its population and is to be found very frequently in some regions.

In the wild, the mating and breeding season extends from February to April. Inseparable are colony breeders who always breed in larger groups; they are not particularly picky about choosing the right place. A couple incubates three to six eggs in a year, which are then hatched over a period of around 22 days.

Now we want to go into a little more detail about rose-heads: These representatives of the agapornids reach a body length of around 15 cm and a weight of 50 g. Males and females of this Agapornid species are outwardly similar to 99%, which makes it very difficult to differentiate between them. The tail of the bird is short and pointed and is usually bluish in color. The strong beak appears relatively large and is flesh-colored to slightly yellowish. The predominantly green plumage is a little lighter on the ventral side. Characteristic and namesake is the rose-red colored forehead: The color extends even further over the cheeks and throat area, albeit paler. Roseheads can live up to 20 years and are now considered the most mutational species, alongside the budgie: There are an incredible number of breeding colors, but they do not occur in nature.

The Clowns Among the Parrots

Roseheads are one of the top clowns among the small parrots. This is mainly due to their intelligence and curiosity. This combination creates funny situations that are a lot of fun while watching. As the name or upper species suggests, these birds absolutely need a partner. They are extremely communicative as well as social and are lifelong loyal to their partner. The combination of males and females is best, of course, but a same-sex couple can work too.

Of course, you can also hold a rose-head on its own, but that is only possible if you deal intensively with the bird around the clock. In spite of everything, contact with another bird is natural and more appropriate to the species. But here, too, the feathers can fly: despite their pretty name, rose-headed roses are downright peculiar and quarrelsome. Most of the time the birds get along again quickly, but they should therefore not be socialized with other bird species: They simply do not speak “the same language”, which leads to even more potential for conflict.

Roseheads are very active, which is particularly noticeable in the mornings and evenings: Then they get started and can reach a volume that one would not believe such small parrots to be capable of. You should definitely pay attention to this factor before buying: Your not very delicate voices hold the potential for a neighborhood dispute. Finally, there is one factor that sets them apart from budgies, for example, They are absolutely not “lap birds”: They take a very long time to gain confidence in their human beings. Really hand-tame roseheads are very rare and this relationship may require 2 years of work. In any case, one should avoid forced attempts at taming.

Keeping rosebuds is relatively easy and also suitable for beginners. We definitely recommend keeping them as a couple or in a group. When keeping in groups, you have to make sure that all animals are put into the aviary at the same time, otherwise, the quarrelsome animals will inevitably bite. Since they have a very strong need to gnaw, fresh wood should always be integrated into the cage and this should also be considered when choosing toys and designing the cage. In any case, a large cage should be chosen for keeping, even better an aviary. This can also be set up outside in the warm half of the year. If they live in a cage, daily free flight is a must. As long as they can enjoy the daily free flights, they are basically easy to please. Another preference: you really like to bathe. Here, however, they disdain many bathing houses and prefer flat bowls such as flower pot coasters or casserole dishes. 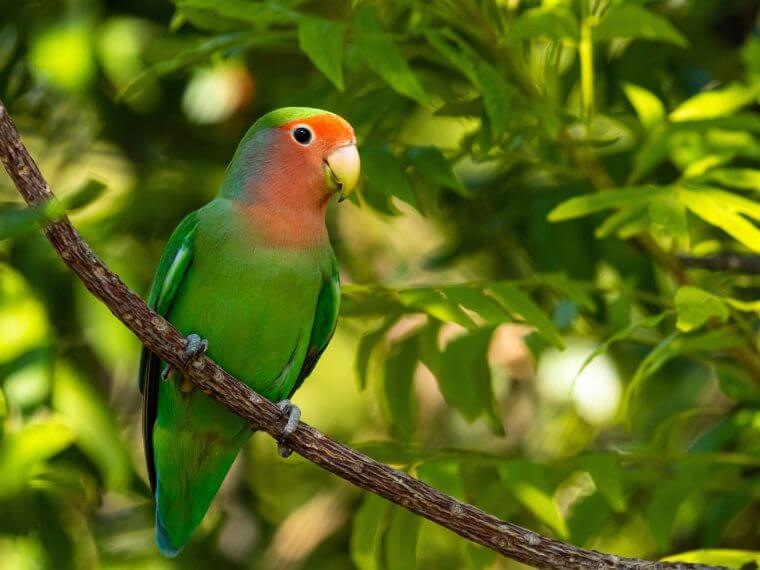 Diet isn’t particularly complicated either. All you need is a good mix of grains, green fodder, and bird grit. The latter consists of small stones that help grind the grain in the stomach. Good bird sand species already contain grit. Special variants for agapornids, Eclectus parrots, or large parakeets are suitable as a grain mix. A few sunflower seeds are ideal because they are very rich in fat and can quickly lead to obesity.

You can offer fruits, vegetables, herbs, and berries as green fodder. However, some birds do not know any green fodder from their previous owners. To get them used to it, simply sprinkle a thin layer of food over the green forage. When you pick it down, you notice that it doesn’t taste bad at all. In addition, the green fodder should be offered in various forms (in one piece, cut up, grated, mashed, etc.).