A friendly and affectionate cat, the Ragdoll is well suited to be housed and needs a lot of attention. Find out everything about the appearance, origin, character, nature, attitude, and care of the Ragdoll cat breed in the profile.

Ragdoll cats are among the most popular pedigree cats among cat lovers. Here you will find the most important information about the Ragdoll.

The Appearance of the Ragdoll 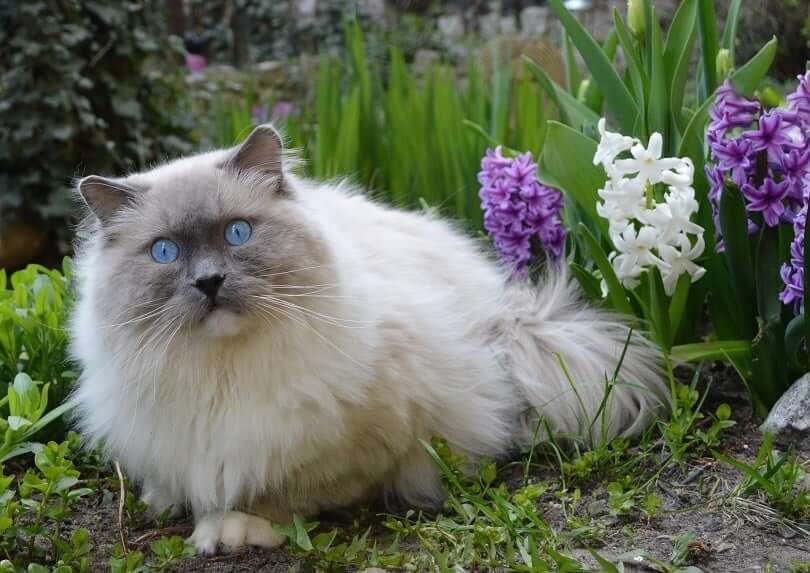 The long, muscular, and powerful masked and pointed cat is extremely impressive in size and weight. The Ragdoll is a massive, medium-boned cat:

Coat and Colors of the Ragdoll

With its dense, soft fur of medium to long hair, the ragdoll looks like a stuffed animal that has come to life at first glance. A large ruff frames the face giving the appearance of a bib. On the face itself, the fur is short. It is medium to long on the sides, belly, and rear. It is short to medium-long on the front legs.

The colors of the ragdoll recognized by the FIFé are seal, blue, chocolate, and lilac point, and for some time new colors such as red or flame point and cream point. Colorpoint, Mitted, and Bicolour are recognized as marking variants:

Nature and Temperament of the Ragdoll

Ragdolls are known to be extremely gentle and good-natured. Even if they are rather quiet indoor cats, it never gets boring with them. Because the playful ragdoll is very often in the mood for jokes. But even if she is seized by the desire to play, you don’t have to worry about your apartment. Ragdolls are attentive cats that move smoothly and elegantly even in strange apartments. These semi-longhair cats are friendly, even-tempered, curious, and affectionate. They follow a loved one at every step. This cat is also well suited for children.

Keeping and Caring for the Ragdoll

Ragdolls are very sociable. You always want to be in the middle of the action. They don’t like staying at home alone. These cats feel most comfortable when they are surrounded by other cats. But even her human must not leave this gentle cat alone for too long so that she does not become lonely. Ragdolls enjoy running around in a secure yard, but even if they are only to live indoors, the Ragdoll doesn’t mind as long as they get enough attention. Of course, the long coat needs to be cared for, especially when changing the coat.

Ragdolls are generally considered to be healthy and robust cats. However, like many domestic cats, the Ragdoll can also contract the heart disease HCM (hypertrophic cardiomyopathy). This disease causes thickening of the heart muscle and enlargement of the left ventricle. The disease is hereditary and always fatal. There is a genetic test for Ragdolls that provides information on whether the animal has the predisposition to contract HCM.

Origin and History of the Ragdoll 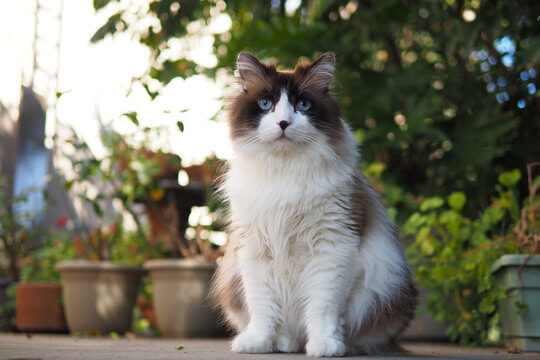 Like many breeds of cats, the Ragdoll was born from the observation of a random mutation. When the American Ann Baker saw the litter of the neighbor’s white, angora-like cat “Josephine”, she was amazed and delighted at the same time. And seized by a sudden desire to purposefully breed the small, blue-eyed kittens with their enormous physique and dense, medium-length fur.

Consistent and enterprising, Ann Baker built up her successful breeding with some of Josephine’s kittens and a few unidentified males with mask drawings and led them to great fame, first in America and then in Europe from the 1980s. Here it was recognized by the FIFé in the bicolor version in 1992, followed by recognition of the colorpoint and mitted marking variants. Today the Ragdoll is one of the most popular cat breeds in the world.