Purple herons are rare here: there are only a few breeding pairs in the south and northwest of Germany. They get their name from the reddish-brown color of their plumage.

Purple herons belong to the herons. They have very long legs, a long neck, a long beak, and a short tail. Their upright posture makes them unmistakable. Unlike storks or cranes, they always pull their heads and necks in when they fly. Purple herons grow to a length of 78-90 centimeters and are therefore slightly smaller than the closely related gray herons. They have a wingspan of 120-150 centimeters.

Their plumage is dark grey, the neck is reddish-brown, and has a dark vertical stripe. The feathers are black on top of the head and under the tail. During the mating season, they wear a thin tuft of feathers on the back of their heads. The pointed, long beak and the thin legs are colored yellow. Young purple herons wear a rather brownish plumage. It can take five years for them to be colored exactly like their parents.

Where does the purple heron live?

Purple Heron lives in Central Europe, around the Mediterranean Sea, and in North Africa. In the east, their range extends from the Czech Republic and Hungary across the Near East to Indonesia. In cooler and temperate regions like ours, purple herons are migratory birds: They migrate south and southwest over the equator in September. 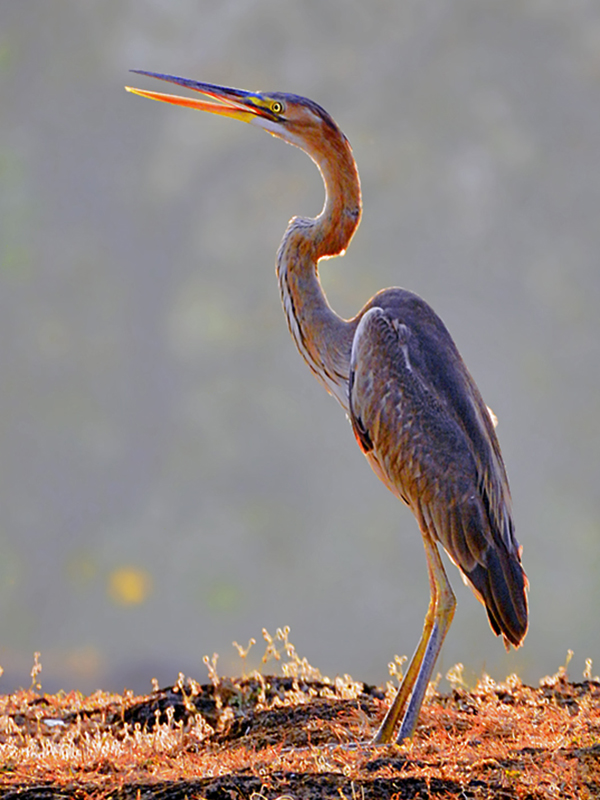 Like all herons, purple herons need a habitat where there is water. They love reed beds in lakes or willow thickets on quiet river arms. They avoid wooded areas.

What types of purple herons are there?

The heron family includes about 63 species that live all over the world. These include tiny birds like the Indian bittern, which weighs just 100 grams, and the large goliath heron, which weighs 2.6 kilograms and lives in Iraq. Many are at home in the tropics and subtropics, but they do not live in the cold regions of the earth.

But purple herons also have many close relatives in Europe: These include the gray heron, which is quite common here, as well as great egrets, little egrets, night herons, and cattle egrets.

How does the purple heron live?

Purple herons are not shy, but you hardly ever see them here: They are very rare and live quite hidden in the reeds. They are also particularly well adapted to life in the reeds: They have extra-long toes with which they can grasp the reeds well.

At best, you can see them from the beginning of April, when they return from their winter quarters. They are rarely seen perched in trees. Purple herons have a strong sense of family: when one of the partners returns to the nest, they greet each other profusely by ruffling their forehead feathers, craning their necks, and croaking.

In case of danger, purple herons adopt the so-called post position: they stand motionless, erect, and with their head and beak stretched out in the air between the reeds, so that they are hardly recognizable. Even the young master this posture when they are disturbed and surprised in the nest. Many birds lubricate their feathers with oil from the preen gland to make them waterproof.

This is not the case with purple herons: They use a kind of powder that is made from what is known as powder downs: these are feathers whose tips gradually crumble into powder. They distribute it in the feathers with their beak and the claws of their legs.

Friends and foes of the purple heron 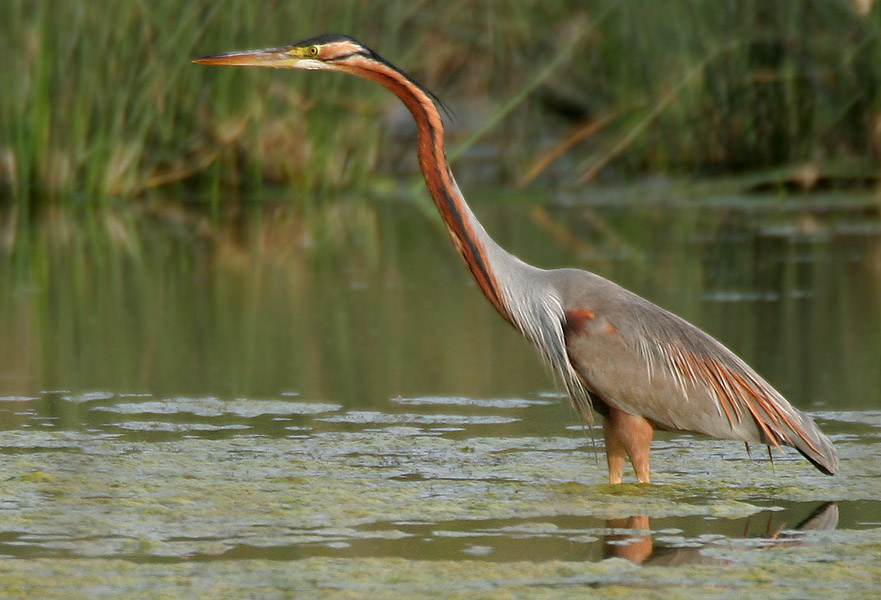 If purple herons are disturbed while incubating and leaving the nest, predators such as rooks can attack the eggs. Adult birds hardly have any enemies, only rarely do they fall victim to a bird of prey. Their greatest enemy is man, who is destroying their habitats more and more.

How does the purple heron reproduce?

The breeding season for purple herons begins in May and June. Mostly they breed in colonies. Their nests are also called nests. Although these nests are quite large and heavy, the birds mostly build them in the reeds at a height of about 2 meters; only rarely is a purple heron nest high up in trees. The nests are funnel-shaped and are constantly being patched up during the breeding season, eventually ending up looking fairly flat.

Both parents take turns incubating and taking care of the offspring. After mating, the female lays three to five light blue eggs about 55 millimeters long in the nest. Sometimes there are even eight. Incubation lasts 24 to 28 days, then the young hatch. They remain in the nest, but if threatened, they can climb out of the nest and hide among the reeds by the age of ten days. When the danger is over, they return to the nest.