The extremely strikingly colored poison dart frogs are popular frogs in terraristics. Who doesn’t like to have an animal at home that can kill a full-grown man in a short time ?! In fact, the little tropical frogs are uncomplicated to keep and, above all, completely harmless. You will find out why this is so in this article, as well as how to properly take care of the cute South Americans. 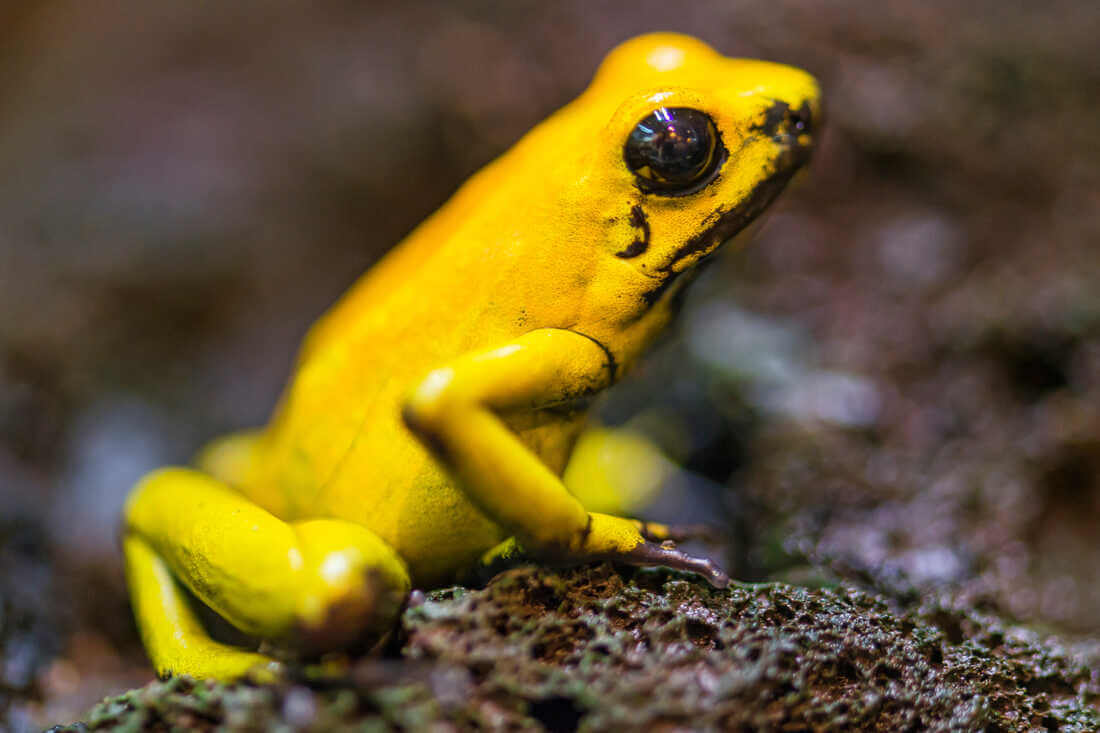 The poison dart frogs (Dendrobatidae, therefore also called dendrobats) are often referred to as poison dart frogs or color frogs. There are currently around 170 different types. Some poison dart frogs are extremely poisonous, but still only grow to around 12 – 50 mm in size, so they are rather “tiny”. The generalized German term “poison dart frogs” for the whole family is confusing and incorrect since only three species of the genus Phyllobates are actually used by indigenous peoples for the extraction of poison darts.

Poison dart frogs are diurnal frogs that are among the most colorful of all amphibians. The species described so far live in tropical regions of South and Central America. The natural distribution ranges from Peru and Bolivia to Brazil. The Amazon basin is settled and the habitats extend further to Suriname, the Guiana Shield to Venezuela. Dendrobats are also native to the west of the Andes, from Ecuador to Colombia to Central America.

These brightly colored frogs live in their natural habitat at daytime temperatures of 25 to 28 ° C and night temperatures of 22 to 25 ° C and relative humidity of 70 to 100%. Depending on the species, dendrobats can be found living on the ground, on trees, or even in the treetops.

The mostly high-contrast and bright color shows the predators of the tree climbers that they are completely inedible. The sudden expulsion of toxic substances through the skin is an effective defense strategy that many other animals also use, such as the native fire salamander.

Indigenous peoples of Colombia and Panama traditionally use the poisonous skin secretion of frogs as an arrow poison. Some species contain so much venom that hunters only need to stroke their blowpipe arrows over the back of the living frog. Other taxa are impaled on wooden sticks and gently warmed over the fire. The secretion that escapes is applied to the arrowheads. Animals killed with a poison arrow die instantly. Some toxins are deadly to humans too!

Poison dart frogs are not poisonous from birth. Rather, they acquire their toxicity by eating a wide variety of small organisms, especially harmless mites. The poison dart frogs apparently accumulate nitrogenous substances, some of which are harmless, of the arthropods, so-called alkaloids, in the body and change them chemically in such a way that they are much more toxic than the starting materials. Which enzyme in the frog’s body makes the creation of these violent toxins possible has not yet been scientifically clarified.

However, there are not only changes in toxins caused by the frog organism (metabolism), but also an unchanged accumulation of poisons that are ingested through food. The toxicity of captive animals decreases over time if there are no poisonous or suitable feed animals. In most cases offspring born in captivity no longer have any skin toxins. After the second generation at the latest, the offspring are completely poison-free.

By the way: about a third of the species in the dendrobat family produce skin toxins. The rest of the family, i.e. those that cannot form alkaloids for self-protection, resemble the inedible species in terms of their coloring and drawing. With this adaptation, you deceive possible predators. This evolutionary selection advantage is known as Bata’s mimicry.

Potential predators, however, first have to learn how inedible tree frogs are. Usually, a single experience is enough for a predator to develop a lifelong aversion. Now it can happen that a poison dart frog becomes a victim, however, all other individuals of this population are spared from this hunter from now on and thus gain a survival advantage.

As poison dart frogs from offspring are harmless, these beautifully colored frog frogs are suitable for keeping in tropical terrariums. In all of my explanations, you should take into account that the keeping conditions of different species differ. In any case, you should obtain sufficient specialist literature before purchasing the necessary utensils and the animals!

Now to the terrarium: The terrarium should be at least 50 cm x 50 cm x 50 cm for a single animal. Bromeliads and climbing plants are suitable for planting so that the tree climbers can also climb. The ground can be covered with oak leaves or bark mulch. To ensure a high level of humidity, I recommend the back and side walls made of coconut fiber or similar material. You should also pay attention to hiding places. A mangrove root and half a coconut shell are suitable for this. A water point provides the necessary humidification.

Poison dart frogs are diurnal and already feel at home in small to medium-sized terrariums. You should, however, take into account that the animals defend their territory and therefore a correspondingly large terrarium with sufficient retreat options must be available if kept in groups. I also recommend that you provide a small piece of water with a waterfall.

To keep the humidity constant (at least 80%), I recommend purchasing an automatic irrigation system. The temperature can be regulated with heating mats or heating cables and should be between 22 ° C and 28 ° C.

The dendrobats naturally feed on a multitude of small and tiny insects, arachnids, and arthropods. The frogs react purely to the movement of the food, so only live food is an option. These include fruit flies, bean aphids, springtails, woodlice, etc.

Small crickets and crickets are also suitable food, but they also cause some noise.

Some keepers recommend enriching the feed with a food supplement, as this vitamin-mineral mixture is said to have positive effects on the health of the animals.

There are various tasks involved in daily maintenance, such as B. the control of the air humidity, the temperature control, the cleaning of the water part (if there is no filter), the regular feeding (approx. Every 2-3 days), and the daily health check.

When buying animals, you should pay attention to their state of health. You must report the animals to the responsible authority (e.g. district office) within two weeks of buying them, as they are protected by species. The genera Dendrobates, Epipedobates, Phyllobates and Minyobates are listed in Appendix II of the Washington Convention on the Protection of Species (CITES). The trade-in of these animals is strictly regulated.

Poison dart frogs are beautifully colored frogs that are great to watch and offer many interesting opportunities for conversation.