They are shy but smart, and their likable nature fascinates us: The orangutans with their red, long fur are the only great apes in Asia.

Orangutans belong to the great apes along with the gorillas and chimpanzees that live in Africa. But because they differ more from their African relatives, they form their own subfamily. Orangutans measure 115 to 150 centimeters from head to bottom.

Males and females weigh differently: while male orangs weigh 50 to 90 kilograms – some even more – the more delicate females only weigh 30 to 50 kilograms. Like all great apes, they have no tail. Their long, shaggy, and red to brownish-colored fur is unmistakable. The fur hangs down infringes that are up to 50 centimeters long, especially on the shoulders and arms.

These serve a special purpose: rainwater runs off them so that the animals’ skin stays as dry as possible even in heavy rain. The orangutan’s head has fewer bulges over the eyes than that of the African apes, and their snout protrudes relatively far. 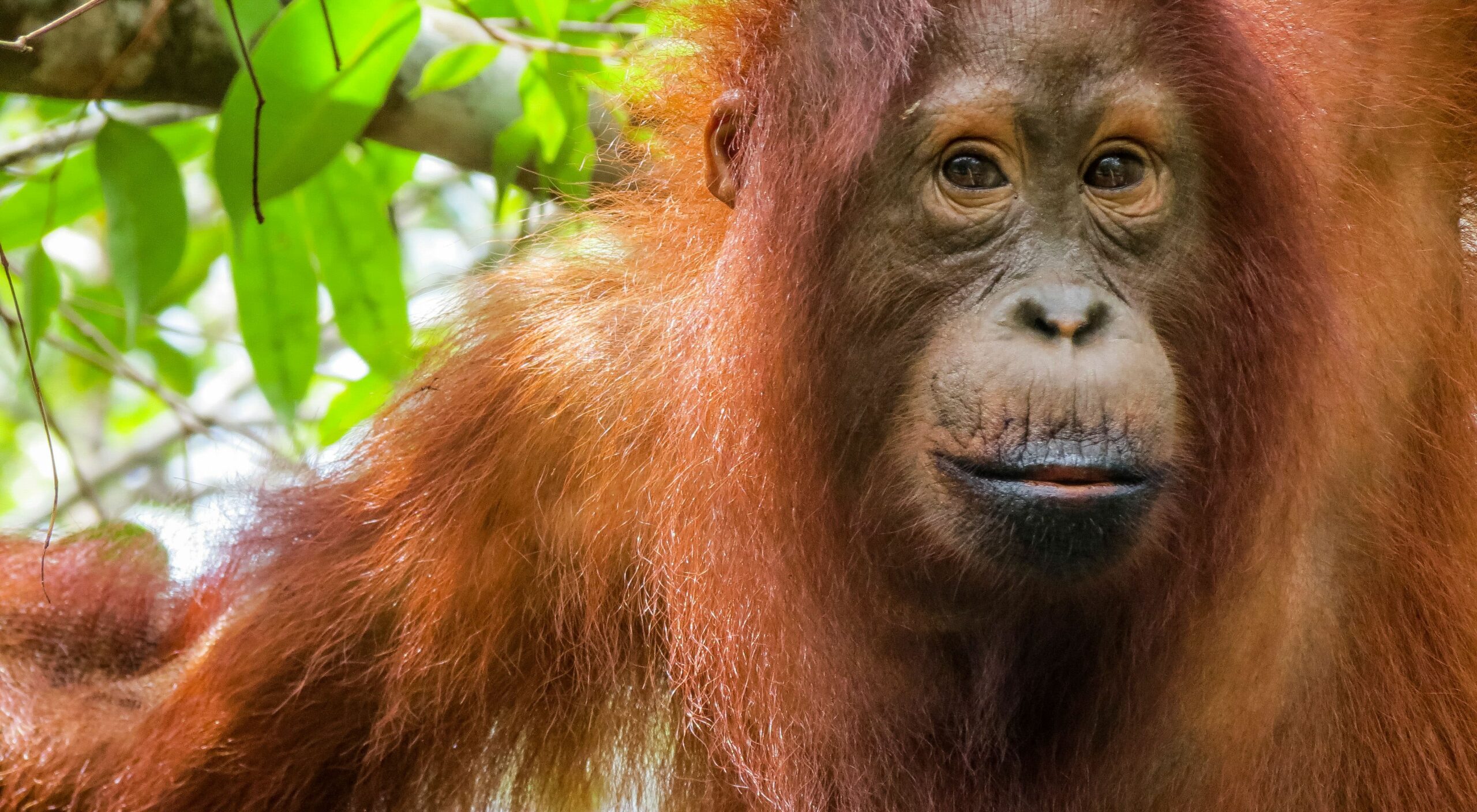 Orangutans are perfectly adapted to life in trees: their legs are relatively short and their feet are almost like hands. The arms are extremely long: an adult orangutan can have a wingspan of 2.25 meters. The hands are long and slightly curved, the thumb is short – so orangutans can grip very well. Thanks to their short legs and long arms, orangs are adept climbers who swing powerfully from branch to branch.

Where do orangutans live?

Today, orangutans are only found in Southeast Asia on the two Indonesian islands of Sumatra and Borneo. In Sumatra, orangs live in the northwest and some parts of the west coast, in Borneo they are mainly found in the south and east. In the past, fossils show, they were much more widespread across Southeast Asia. Orangutans are tree-dwellers: They live in tropical rain forests. There they occur from the sea coasts up to an altitude of about 1500 meters. They are often found near swamps and rivers.

What species of orangutans are there?

The orangutans living in Borneo and Sumatra are somewhat different from each other. While they were once thought to be two subspecies, today they are mostly considered to be two different but very closely related species.

The orangutans living in Sumatra have the scientific name Pongo abelii, those on Borneo Pongo pygmaeus. The Bornean orangutans are somewhat more delicate and have shorter and darker fur, while the fur of the orangutans in Sumatra is longer and redder.

How old do orangutans get?

In the wild, orangutans can live up to 50 years, in captivity about 60 years.

How do orangutans live?

Compared to other great apes, orangutans are relatively shy and reclusive. But like their African relatives, they are diurnal. The name “orangutan” comes from the Malay language and means “forest people” in German – an indication that orangutans are only found in the forest.

Of all the great apes, they are the only true tree-dwellers. Chimpanzees and gorillas live both on the ground and in trees. Orangutans, on the other hand, are perfect climbers, spending most of their time on jungle trees, swinging gracefully from one tree to another.

At night they build tree nests out of twigs and leaves. These nests can be up to a meter in diameter. They are rarely seen on the ground, and when they are, they don’t lean on the knuckles of their hands as gorillas or chimpanzees do, but on their palms or fists. And water is not in their element either: Orangutans, like all great apes and like us humans, cannot swim by nature.

That’s why it happens again and again that orangutans drown. However, because they are very intelligent and imitate many things, they can certainly learn to swim.

Something else distinguishes the orangs from other great apes: They don’t live in groups, but they aren’t really loners either. Females and their young live together, occasionally accompanied by a male. Other adult orangutans often roam alone, but sometimes in pairs. Females in particular occasionally seek the company of other animals, while males tend to react hostilely when they meet one another. 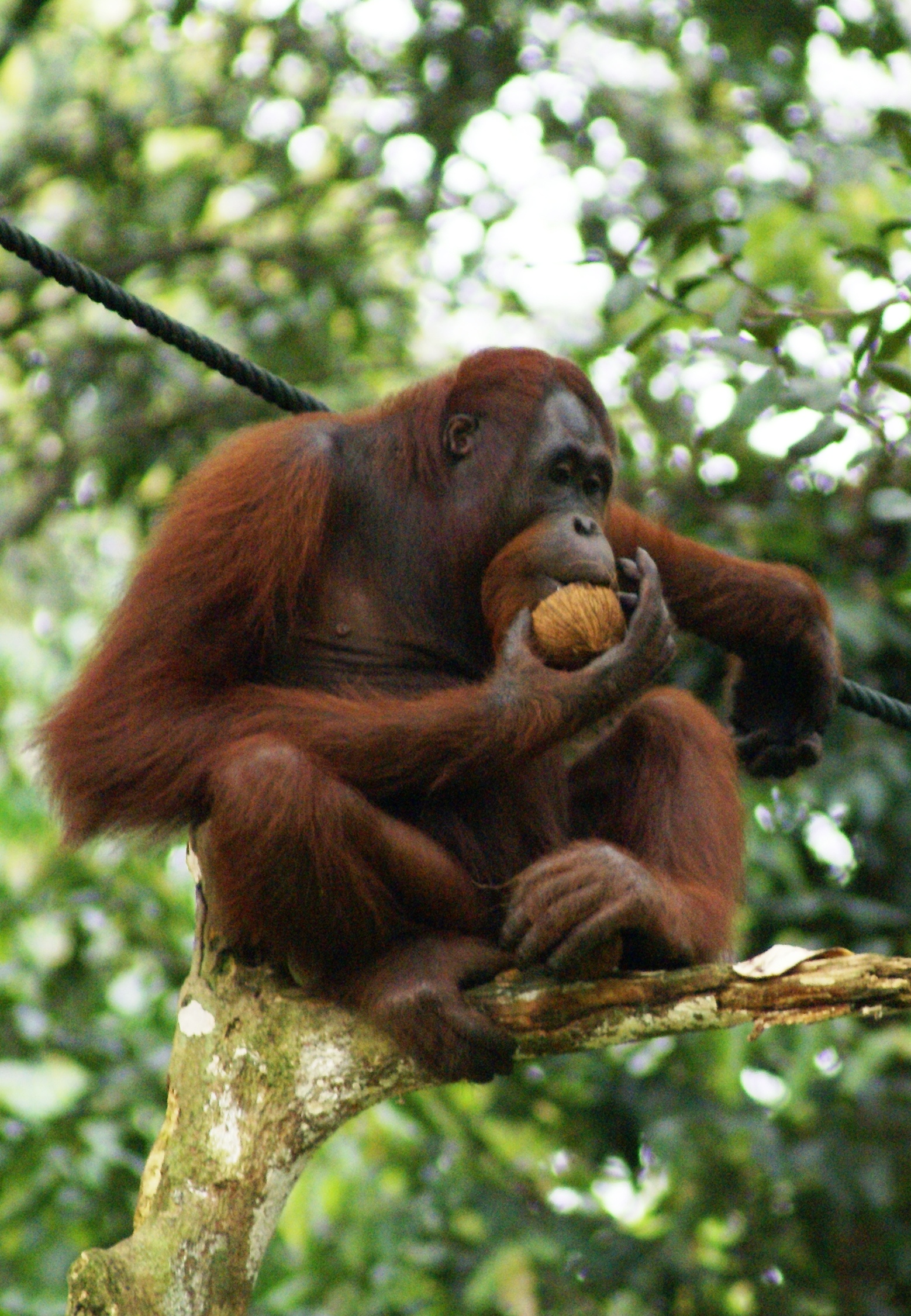 However, the exact family life and social behavior of the orangutans is not yet known – we simply know too little about these forest dwellers.

Researchers have discovered that higher-ranking orangutans in particular have a territory in which they forage daily, while lower-ranking animals roam. Some stay in one area for a few months, continue migrating, and return to the same areas again and again, others – especially young males – are constantly migrating.

Friends and foes of the orangutan

Predators in particular can be dangerous to orangutans. However, the greatest threat comes from deforestation and the destruction of their habitat. In addition, orangutans are still hunted, and young animals, in particular, are even sold as pets – although this is strictly forbidden.

How do orangutans reproduce?

Orangutans reproduce year-round. A young is born eight to nine months after mating. The babies weigh 1.5 to 2 kilograms. They depend entirely on their mother’s care: they cling to their fur, are carried around, suckled, and fed chewed food. And of course, they sleep with her in the tree nest. They only begin to discover the world around them and learn to climb from the age of about two years. However, at first, they always stay close to their mother. Young orangs only slowly become independent at the age of five to eight.