“Because when there is a bunch, then everything is ready” – horses in the carnival are part of it, like camels. But how stressful is the hustle and bustle for you? Find out here how horses are prepared for their task, how they can withstand stress, and how moving affects their nerves.

Horses in the carnival have a long tradition and go back to the traditional prince guardsmen. Initially, the “Corps du Garde” were used as bodyguards for princes, kings, and emperors. However, with their uniform and colorful uniforms, they had “only” a decorative function as early as the 18th century. Then as now, some of the Prinzengarden were on horseback. And this year too, 480 horses have already been registered for the bodyguard of the Carnival Prince in Cologne’s Rose Monday procession. Even if the four-legged friends have been shaping the scene for years, especially in large parades like the one in Cologne, every year there are new critical voices criticizing the use of horses in the carnival. The stress is too high for the horses and the effort is dangerous for humans and animals. 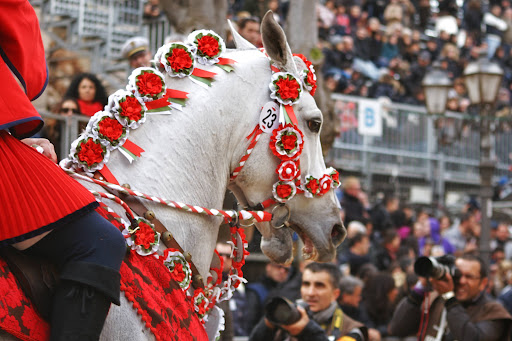 Above all, the method of sedation, with which one tries to immobilize the horses for the train route, is in the criticism. The animals’ natural instinct to flee is suppressed with the help of sedatives. Although sedation is forbidden and therefore contrary to animal welfare, one sees again and again horses that give the impression that they have been given tranquilizers despite the prohibition. In geldings, this can often be recognized by the limp limb hanging out. Even sedation does not guarantee safety. On the contrary, sedated horses are unsteady on their legs and often even react particularly nervously when the effect wears off. This represents a danger for riders and animals, as well as for the spectators.

Of course, sedation of the animals is not the rule and has been restricted by increased controls by the authorities. Instead, the carnival parades rely on specially trained horses that are prepared months in advance for use at major events. More and more attention is paid to the skills of the riders.

Whereas in the past a few compulsory lessons were enough, the riders now prepare in advance for the carnival events. The clubs meet for joint rides, train with music and the hustle and bustle in the riding arenas, and prepare the horses for unusual situations and objects. The Cologne Prinzengarde, for example, has the skills of the riders checked by an independent tournament judge.

A rethinking of the use of horses in carnival parades was started in 2012 by an incident in Aachen, among other things. The owner of a horse farm in the region had received a threatening phone call. If he should lend horses for the train again, his stable would be burned down. Radical animal rights activists were suspected of being behind the call. All horses were removed from the train for safety reasons.

Only the Aachen city riders took part with their former police horses and announced that the year-round carnival training would make sedation superfluous. Other riders and horse rental companies, however, publicly admitted to having sedated in the past. The Aachen veterinary authority then asked all participants to better prepare the horses in the future and announced increased controls.

Daily Routine for Horses in Carnival

What does a day like that for a carnival horse look like? The day begins early for the horses, riders, and runners who are part of the Cologne Rose Monday procession. At 4 a.m., the horses are cleaned and their hairdos are already in the respective club colors. When the clubs have brought their own saddlecloths and gaiters into the stable, the animals are saddled and made ready so that you only have to put on the bridle at the destination. At 8 o’clock the trucks and vans come to bring the horses to the club’s premises or hotels where the club’s riders are waiting. This is where the number badges are assigned, which you can use to call up all the details such as the name of the horse, rider, carnival company, and insurance company, in case something should go wrong.

Afterward, the horse and rider set out on the 15 to 20-minute walk to the installation site at Severinstor in Cologne’s southern part of the city. Here everyone has the opportunity to take a deep breath and have breakfast. The call to collect and sit up will sound around 10.30 a.m. Now the movie starts and the real hustle and bustle begin. In addition to the horses, there are so-called runners who, in an emergency, still have one hand on the reins and try to calm the horse down. They are also responsible for preventing unwary children and adults from reaching for candy from under the horses.

The actual train takes about four hours and is 6.5 kilometers long. The stop-and-go is then to the end of the train path on Mohrenstrasse. From here the horses have to go back to the vans, which are still waiting at the club’s premises or hotels. After a 20-minute return journey, the horses are handed over and returned home. 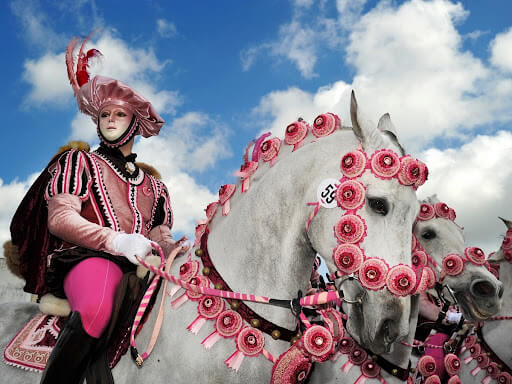 Even for well-trained horses, the Rose Monday procession is a strain. You can see a lot of horses in the carnival, sweating profusely and prancing because of the stress and exertion. The stress is enormous, especially for carriage horses, even if you are used to these rifle festivals and parades. Narrow alleys, loud background noise, and objects flying around are a problem for the escape and herd animals. Most of the time the horses rock each other up in their stress and thus become a danger for themselves, the rider, and the spectators. Animal welfare organizations also criticize the inadequate preparation of horses and riders.

And the journey from the riding stables, which are mostly far away, is also very exhausting for the animals. The authorities would have tightened the controls, but blood samples can only be carried out at random points in up to 500 horses or more, and even veterinarians cannot immediately detect slight sedation. The German Animal Welfare Association, therefore, calls for a drastic reduction in the number of horses in the carnival and the exclusive use of well-prepared animals and riders. And for many animal-loving revelers, the question arises whether one should not generally do without horses in the carnival in order to spare the animals these exertions?