Coursing is a sport recognized by the FCI for all sighthound breeds, in which a rabbit dummy is pulled across an open field. Unlike greyhound racing, it doesn’t take place on a track. All information about dog sport coursing can be found in this article.

Coursing, in English: the hunt is the sporty simulation of a rabbit hunt on a racetrack, where greyhounds can follow their natural hunting instinct. In a fixed course, a rabbit dummy is pulled in a zigzag course on a string across the coursing field in front of the dogs. Sighthounds are sight hunters and run after moving prey due to instinct.

Coursing is a greyhound sport in which a rabbit dummy is chased across a field.

Which Dogs are Suitable for Coursing?

The condition for participation in official greyhound races is the entry of the dog in the studbook in an FCI-recognized association in the FCI group 10, greyhounds. In Germany, this is the Association for German Dogs (VDH). So if you want to take part in competitions, you have to own a purebred sighthound from a recognized FCI/VDH breed.

Also, be a member of a greyhound racing club that is affiliated with the VDH. There the dogs are trained and prepared for the tournament events. To do this, they must have completed license runs and be in possession of a racing or coursing license, which can be obtained from the club and is issued by the VDH.

Large greyhounds may not take part in coursing or racing until they are 18 months old at the earliest. The little whippets, Italian greyhounds, and Cirneco dell’Etna are already at 15 months. A license can also be revoked if a dog shows behavioral problems. Say if he attacks other dogs instead of chasing the dummy. The holder does not behave in accordance with the rules. Or the dog was doped.

The dogs can then take part in competitions until they are 8 years old. After that, the license expires automatically. 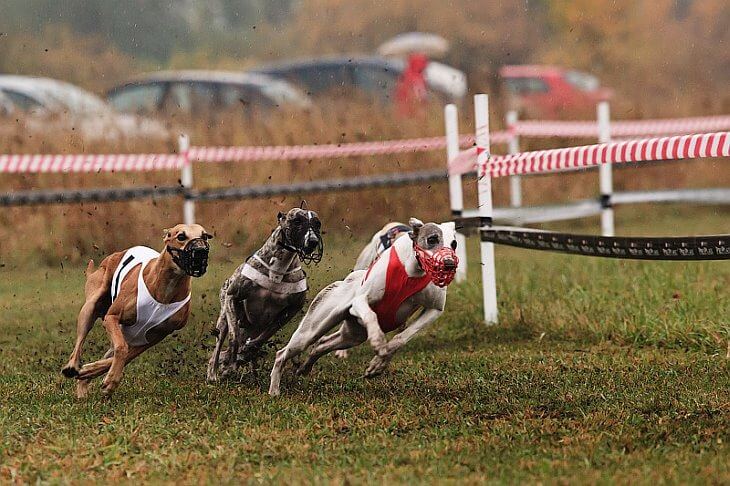 To simulate a hare’s zigzag course, the hare dummy is pulled mechanically on a string via winches fixed to the ground. As a result, the direction of the dummy is constantly changed and the typical zigzag course of a fleeing rabbit is imitated. The cord must be laid in such a way that the dogs cannot become entangled in the cord or injure themselves. The terrain must not have any stones or holes and must have a good grip.

The track length for a coursing field is:

Why is Coursing Useful for the Dog?

In many countries, the hounding of wild animals is now rightly prohibited. In order to offer the greyhounds bred for this purpose a species-appropriate balance, they are taken to coursing or greyhound racing.

What is the Process of a Coursing Race?

In coursing, only two greyhounds compete against each other. The aim is not to catch the rabbit dummy in the coursing field. Agility, speed, condition, consequences of the hunted object, and finally the dog’s enthusiasm are evaluated. So coursing is about the hunting behavior of the greyhound, which is evaluated by the judge.

To distinguish the dogs in the field, they wear racing blankets of different colors. It is also compulsory to wear a muzzle in the race. This protects the dummy on the one hand, but also the dogs themselves. Because once a greyhound is in hunting mode, it is difficult to retrieve. Incidentally, doping controls in coursing or greyhound racing are nothing unusual. They are even mandatory at World and European Championships.

What are the Functions of a Race?

Which Dogs are Suitable for Coursing?

Coursing is a special sport discipline for greyhounds.

What is the Difference Between Coursing and Greyhound Racing? 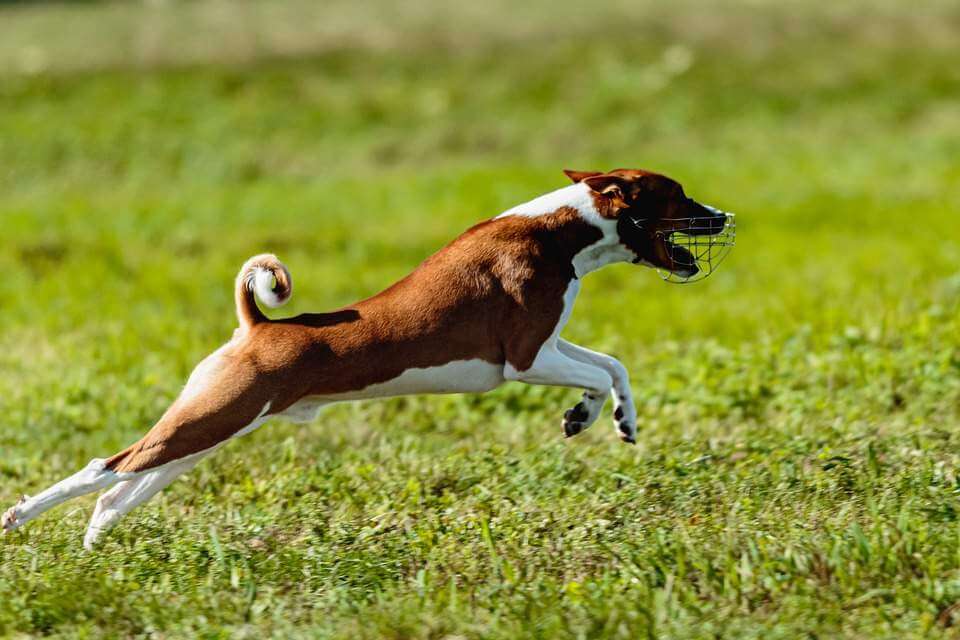 What connects the two sports is that they are the ideal activity for greyhounds. In both cases, a rabbit dummy is mechanically pulled over a distance. Coursing is a relatively young sport that requires more attention from dogs. Because in the confusing coursing course, it is easier for them to lose sight of the dummy.

In a greyhound race, the race takes place on a track with or without hurdles. Several dogs start from a starting box, similar to horse racing. The dummy is mechanically dragged in front of them on the track so that they always have visual contact with the object and are in the drive. The maximum number per race is flat races: six dogs and hurdle races: four dogs. Unlike coursing, greyhound racing is won by the fastest dog. Males and females usually start separately in both coursing and racing.

The racing distances in greyhound racing are:

For race distances of more than 525 meters, the dogs may start twice a day at most. After crossing the finish line, the rabbit dummy must be pulled at least 30 meters at the same speed.

Why are Coursing and Racing Useful for Greyhounds?

Greyhounds are highly specialized hounds that were originally trained and used to hunt healthy wild animals such as rabbits, deer, or foxes. However, unlike other hunting dogs, greyhounds hunt by sight. That is, they run after their prey until they get it. Today, hounding live games is prohibited in Germany and many other countries.

But of course, the greyhounds still carry the hound instinct that has been cultivated over centuries. Coursing and greyhound racing are the ideal sports for greyhounds to exercise physically and mentally and to keep them in a species-appropriate manner.

Professional dog racing is banned in Germany, Austria, and Switzerland. Unfortunately, such races are still held in Great Britain, Ireland, and the USA. And unfortunately, you can also place bets on these foreign dog races in Germany.

The greyhounds are kept in racing stables there and no longer have any connection to life outside the racing field. Dogs that bring in no or no more performance and success are mercilessly killed or sold on. This fate affects around 50,000 dogs annually. So as long as you can bet on dogs, there will be animal suffering.

When Do You Start Coursing?

Sighthounds may take part in coursing competitions at the earliest when they are 18 months old. Small sighthounds such as whippets are already at 15 months.

This is How You Start Coursing with Your Sighthound

Is My Dog Suitable for Coursing? 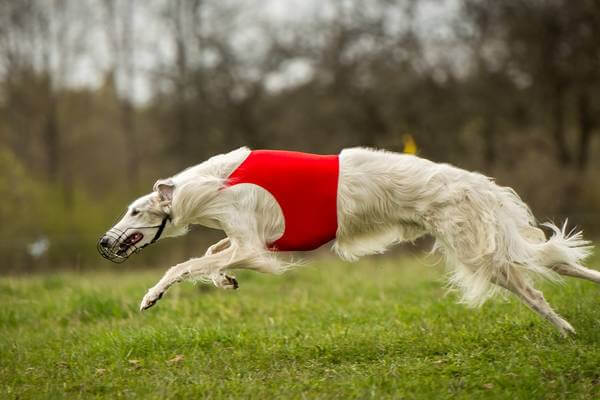 If you own a greyhound, coursing is usually the ideal sport for him. There he can follow his natural instincts and really work out. Are you unsure whether your four-legged friend really enjoys it? Sighthound racing clubs always offer taster lessons to see if it is the right sport for humans and dogs.