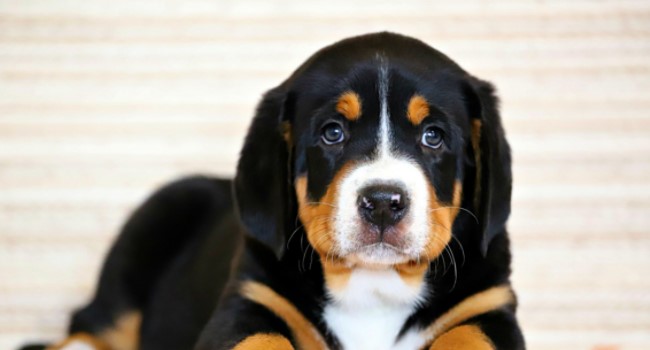 The origin of this popular dog breed from Switzerland is suspected to have come from the ancient Romans. The Greater Swiss Mountain Dog is a typical farmer’s dog that guarded the house and yard. It was mainly bred in the Swiss foothills of the Alps as a guard, draft, and driving dog.

How Big & How Heavy Will It Be?

The Greater Swiss Mountain Dog reaches a size of over 70 cm. Its weight is between 40 and 50 kg. With this size and weight class, the mountain dog is already a stately and large dog.

It is slightly larger than the Bernese Mountain Dog. He is often referred to as “Berner with short hair”.

The topcoat is hard and short with a soft, dense undercoat (stock hair), in contrast to the Bernese Mountain Dog, which has a longer coat.

The typical coat color is tricolor: black with rusty brown or white markings.

Characteristics of this dog breed are the rust-colored markings over the eyes and the symmetrically distributed markings on the head, chest, and legs. These colors and coat markings result in beautiful and unique dogs within the dog breed.

Special fur care is not necessary for the “short-haired mountain dog”.

In its nature, the Greater Swiss Mountain Dog is calm, alert, gentle, and extremely friendly. Despite his size, he is spirited.

Dogs of this breed are usually very reliable as well as being alert, brave, and intelligent.

In the evening they often become particularly affectionate, downright cuddly, and enjoy being stroked. In general, this dog likes social contacts, both with people and with other dogs.

Even as a puppy, the Greater Swiss Mountain Dog develops a good relationship with children and also likes to play with them.

The dog is initially reserved towards strangers, but then quickly notices if someone belongs to the “pack”.

The Big Swiss is a stubborn head who first questions the command that was demanded. This is quite a sign of intelligence. In principle, however, he is willing to learn and has a quick grasp when it is worthwhile for him. Otherwise, he is rather easy-going and will try to get his own way.

You train the Greater Swiss Mountain Dog with gentle consistency and a lot of patience. They are rewarded with a lot of praise and, in the case of a special performance, sometimes with a treat.

You should already train the basic commands with the puppy. Leaving alone must also be trained early on, even if it is only a few minutes in the beginning that you go to another room.

For Whom is a Swiss Mountain Dog Suitable?

Especially for people and families who like to be outdoors but don’t necessarily do sports. Dogs of this breed need sufficient exercise and are not suitable for long jogging or cycling tours due to their size and weight. Unless the excursion is quite leisurely with many breaks…

Conclusion: The Greater Swiss Mountain Dog likes to romp around with other dogs, but can also sleep through the whole day afterward.

The qualities described above make it easy to train as a companion dog. But it can also adapt well as a family dog.

The Greater Swiss Mountain Dog can also be used as a guard dog and impresses with its imposing appearance. Even without special training, he likes to guard the house by barking at visitors and only letting them in when you, as the owner, give the command. Under no circumstances should the dog be kept outdoors all the time! He is by no means a kennel dog but loves to live in the house with his family.

This is not the only reason why this dog will like a house with a garden. 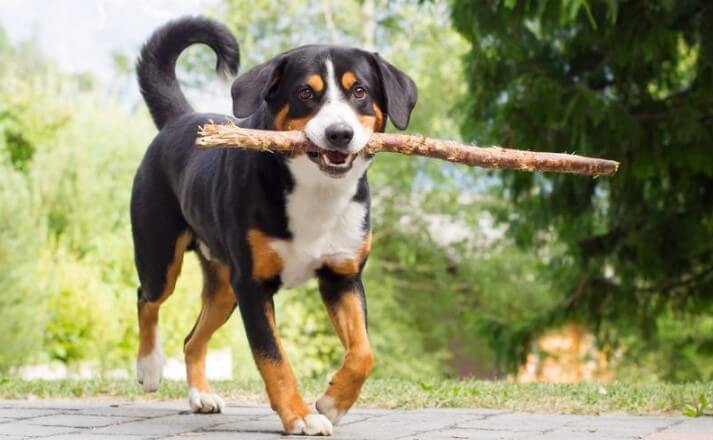 Like any dog, the Greater Swiss Mountain Dog needs plenty of exercise and exercise every day, ideally giving it a task every now and then.

A house with a large plot of land, a farm, or a riding stable is ideal for keeping them. He likes to stay outside for hours and also keeps an eye out. It is by no means an apartment dog.

Dog sport is definitely something for him, but according to his size. He also likes to pull a small wagon or sled. But he also enjoys jogging or cycling.

As with almost all large dogs, hip dysplasia (HD) can occur but can be virtually eliminated with careful parent selection. Torsion of the stomach is also possible, so it is best not to feed them just before going for a walk or exercising. Epilepsy happens from time to time.

On average, these mountain dogs reach an age of 10 to 11 years and are therefore a little older than the long-haired Bernese.