Elephants are the largest land mammals. The pachyderms have fascinated people for thousands of years with their intelligence and sensitive nature.

Elephants belong to the order of the Proboscidea and form the family of elephants. What they have in common is the typical shape: The powerful body, the big ears, and the long trunk as well as the four columnar legs, the soles of which are made of thick padding. They act as shock absorbers and thus help to bear the enormous weight of the animals.

African elephants can reach heights of up to 3.20 meters, weigh up to five tons, and are six to seven meters long. The tail measures about a meter. They have four toes on their front feet and only three on their hind feet. Forest elephants are the smallest species: they only reach 2.40 meters in height. In all species, the females are smaller than the males.

The incisors of the upper jaw have been converted into the typical tusks. The bulls of the African elephants can be over three meters long and weigh over 200 kilograms. The tusks of female African elephants are much smaller. In the case of the Asian elephant, only the males have tusks.

Another distinguishing feature is the ears: They are much larger in African elephants than in their Asian relatives and can grow up to two meters long. 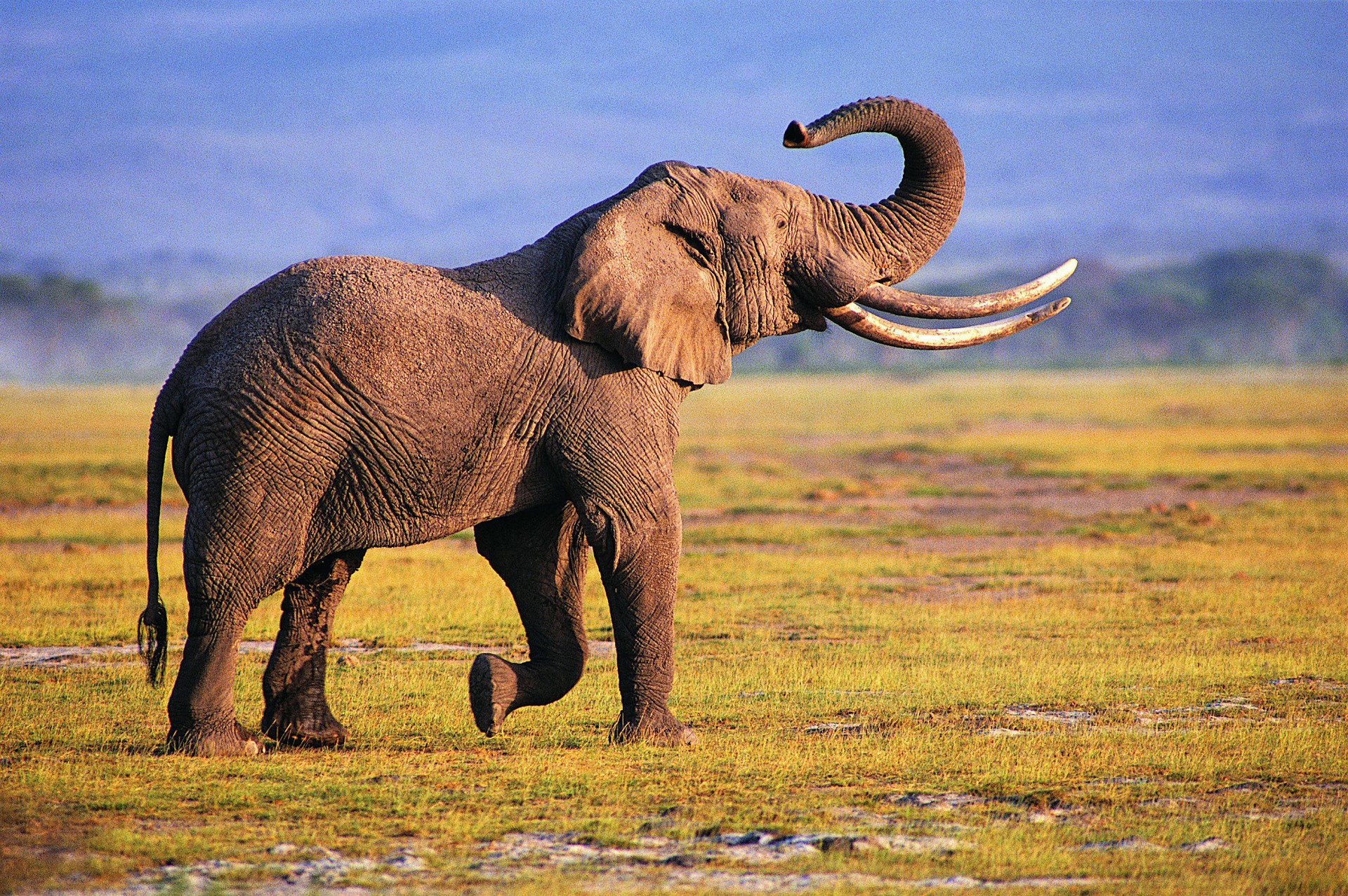 The trunks are not the same either: Asian elephants have only one finger-like muscular extension on the trunk with which they can grip, African elephants have two. These face each other at the end of the trunk.

The skin of the elephant is up to three centimeters thick, but still very sensitive. In baby elephants, it is densely hairy. The bigger the animals get, the more they lose their hair. Adult animals only have hair on their eyes and at the end of their tails.

Where do elephants live?

African elephants migrate through the savannas and steppes of Africa, while the forest elephants – as their name suggests – mainly live in the forests of West Africa. Asian elephants are extremely rare in the wild: They are also mainly found in forest regions.

What types of elephants are there?

Some researchers also divide the Asian elephant into several subspecies.

How old do elephants get?

Elephants live to a great age: they can live up to 60 years. Individual animals even live to be 70 years old.

How do elephants live?

Elephants are among the most intelligent mammals. They are pure herd animals that stay together for generations.

20 to 30 animals live in a group, which is usually led by an old female, the matriarch. She takes the herd to the best feeding and watering places.

Elephants are known for their social behavior: the herd protects the young together, “elephant aunts” also look after the young of other females with great dedication. Injured or old animals also enjoy the protection and care of the herd. Elephants even seem to mourn the deaths of their own kind. Thanks to their excellent memory, not only do they know who belongs to the herd, but they can still remember troublemakers or people who did something to them years later.

Adult male elephants stay away from the herd and join the females only to mate. Younger males have to leave the herd at around the age of 15 and then initially live together in regular “bachelor groups”. Old bulls are often quite insufferable companions and move around alone.

Elephant bulls also regularly come into the so-called “must”: This leads to hormonal changes in behavior and the animals can be very aggressive during this time. However, the Must has nothing to do with the willingness of the animals to mate, its function has not yet been clarified.

The typical feature of all elephants in the trunk, which evolved from the upper lip and the nose: it has thousands of different muscles that are arranged around the two nostrils.

A trunk is a versatile tool: of course, it is used for breathing. The animals hold it up in the air to smell it. However, elephants are also excellent at gripping with their trunks and plucking leaves and branches from trees from a height of up to seven meters. And thanks to the sensitive whiskers on the tip of their trunks, elephants can feel and touch very well with their trunks.

To drink, they suck up several liters of water about 40 centimeters high, close the end with their probosci’s fingers and squirt the water into their mouths.

Because elephants have a small body surface in relation to their body mass, they can only emit little heat. For this reason, they have very large ears, which are well supplied with blood and with which they can regulate their body temperature.

When they move their ears – i.e. flap them – they give off body heat. Elephants are also passionate about bathing and splashing themselves with water: the cool bath also helps them lower their body temperature in hot weather.

Wild elephant herds sometimes travel long distances to find enough food. They are usually quite leisurely on the go: They hike through the savannas and forests at about five kilometers per hour. When threatened, however, they can travel at speeds of up to 40 kilometers per hour.

Friends and foes of elephants 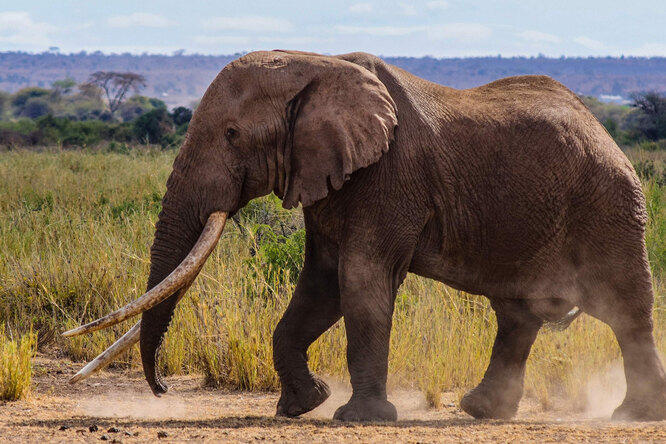 Adult elephants have few enemies in the animal kingdom. However, if they feel threatened or if their young are in danger, they attack their opponents: they spread their ears wide and raise their trunks. Then they roll up their trunks, run towards their opponents with their heads down, and simply overrun them with their massive bodies.

Bull elephants also sometimes fight with each other, running at each other and pushing each other away. These fights can be so fierce that even the tusks break off.

How do elephants reproduce?

Elephants can mate all year round. The gestation period is very long: a female elephant only gives birth to her young two years after mating.

It weighs over 100 kilograms at birth and is one meter tall. Shortly after birth, baby elephants scramble to their feet, supported by their mother’s trunk. They can walk two to three hours later. At first, a calf only gets its mother’s milk: To do this, it sucks on the mother’s teats between the front legs with its mouth. Gradually, the little ones also begin to pluck blades of grass with their trunks.

From the age of two, a baby elephant feeds exclusively on plant food. The tusks only begin to grow between the first and third years of life. Elephants are only fully grown between the ages of 12 and 20 and only then do they become sexually mature. A female elephant can give birth to up to ten young during her lifetime.

How do elephants communicate?

Elephants communicate with each other primarily with sounds. When faced with danger and stress, they trumpet loudly. However, they normally communicate using very low-pitched sounds known as infrasound. He is imperceptible to our ears. Elephants can “talk” to each other over kilometers. Contact with the snout, mutual sniffing, and touching is also used for communication.